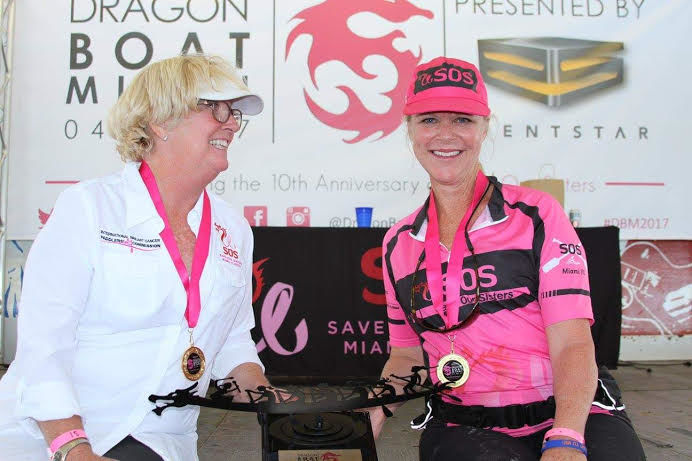 Victoria Jackson on right accepting a tournament championship for SOS. 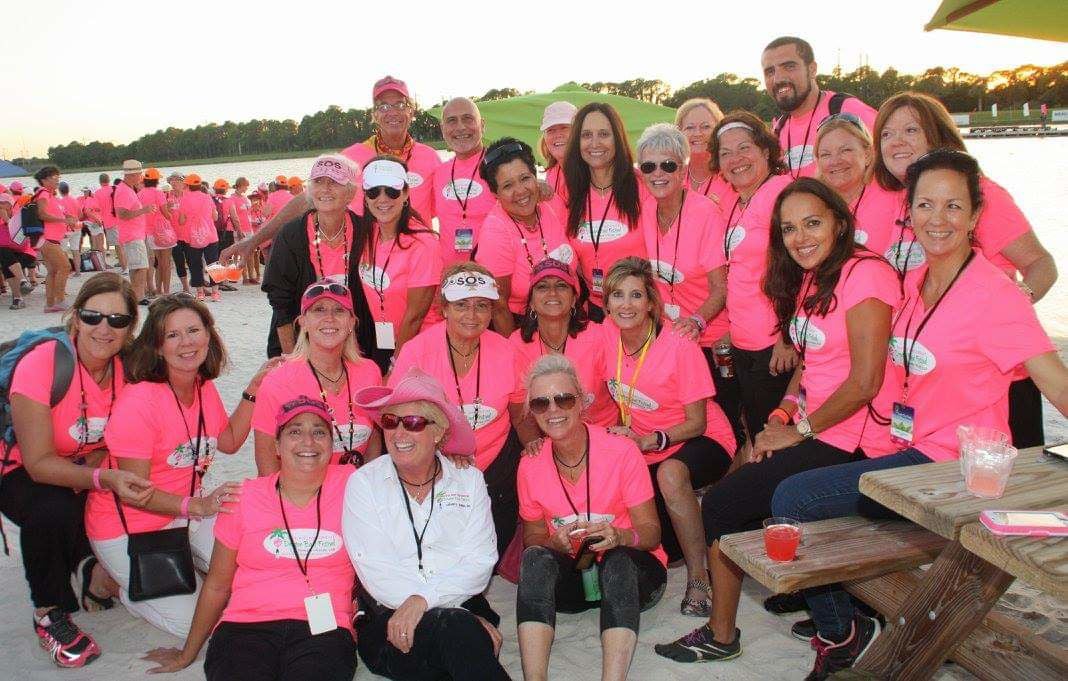 The Save Our Sisters team at the Sarasota International Tournament. 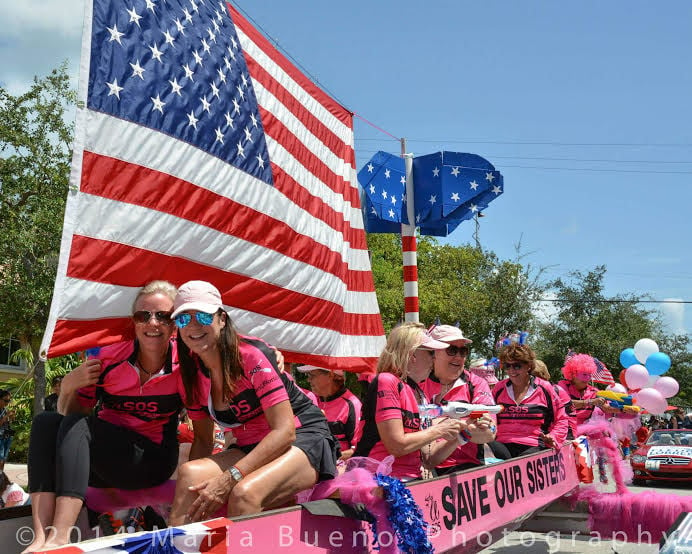 SOS on “The Big Pink” dragon boat at the 4th of July Parade last year. 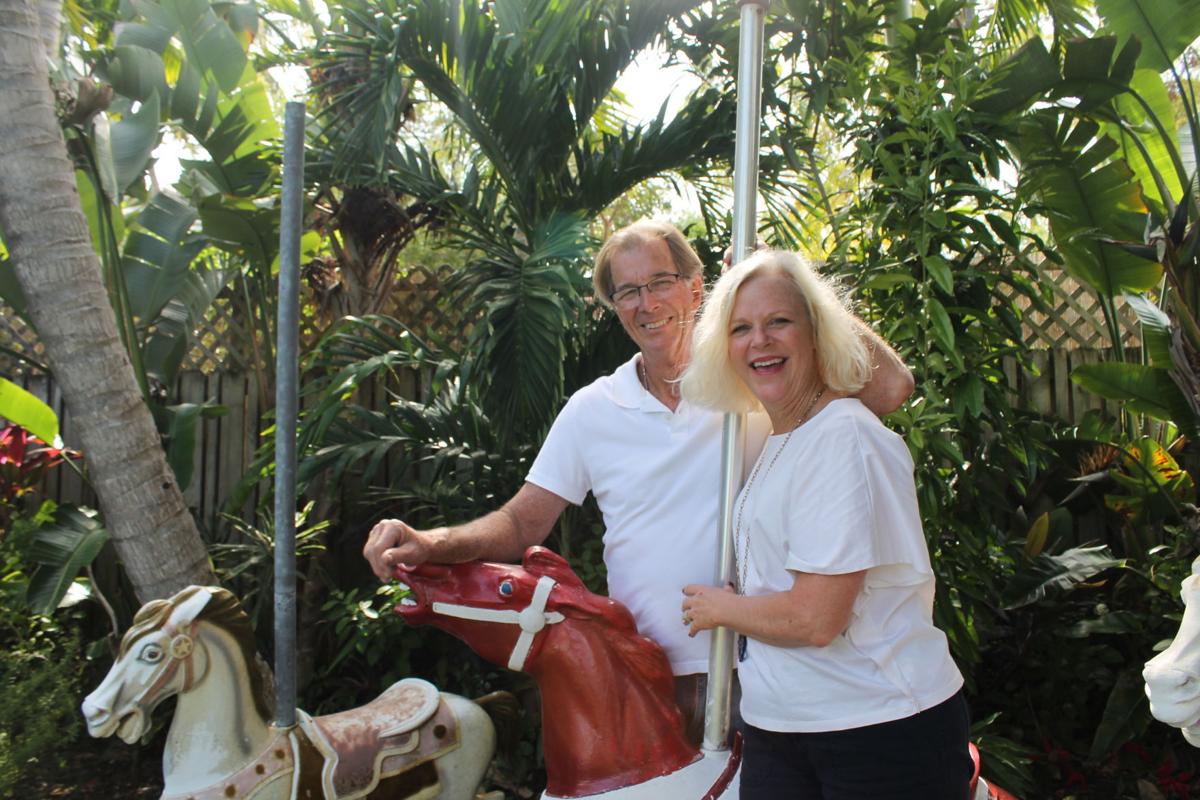 Victoria Jackson on right accepting a tournament championship for SOS.

The Save Our Sisters team at the Sarasota International Tournament.

SOS on “The Big Pink” dragon boat at the 4th of July Parade last year.

In 2003 when Victoria Jackson was walking the ancient pilgrimage of the famous Camino de Santiago in Spain, a spiritual journey begun by seekers in the Middle Ages that takes about thirty days to complete and culminates in the Cathedral Santiago de Compostela in Galicia, she could not have imagined where that road would lead.

It was shortly after her and friend Michelle had embarked on the 500 mile trek that she felt a lump in her breast. This was the beginning of a long winding journey she continues to celebrate today as a ten year member and now President of Save Our Sisters (SOS), South Florida’s first breast cancer survivor dragon boat racing team.

“My mother, sister, aunt and uncle all passed away from breast cancer,” said Victoria.

“I did not think that I had to get it and at an early age I started screening. In my world breast cancer equaled death…I thought this might be the last journey of my life.”

Rather than cut the trip short as her friend had willingly agreed to do so she could get tested immediately, Victoria insisted on continuing.

“It was the best thing I could have done. I got to Santiago and completing that journey…you walk on air after that. I went into the cathedral and I got on my knees and just handed it over, ‘whatever this is I accept it it’s yours.’ I came home and found the right doctors and the right care. The grand finale was having SOS beside me in that boat.”

The International Breast Cancer Paddler’s Commission began in Canada in 1997 with sports medicine exercise physiologist Dr. Don McKenzie. He invited a group of women to experiment with exercising their upper body in a daily canoeing regimen to address lymphedema; a swelling in the upper extremities and a side effect of the cancer.

The tremendous positive results of that “Abreast in a Boat” first dragon boat team began a movement that now represents 156 teams competing year-round from over 20 different countries. They typically do 500 meter races that last about two minutes with twenty women in two rows of ten paddling forward. Every four years they have their grand international competition. Last July the tournament was held in Florence, Italy.

“The dragon boat is like a long canoe with a head and tail of a dragon. From the tip of the nose to the tip of the tail it’s almost 50 feet long,” said Victoria.

“We have a drummer up front and steer person in the back and the 20 paddlers move together, it’s a dance. The drummer is the heartbeat and the paddlers are the claws of the dragon. It’s so symbolic, some people see the dragon like the fight against cancer and we are out there conquering the dragon.”

It has been fifteen years since Victoria’s personal joust with the dragon. She is a full time flight attendant, married to supportive husband Ron Erbel of Key Biscayne Key Bee Honey where she serves in the official capacity of Queen Bee.

She travels and competes regularly with SOS and passionately supports her fellow women “beyonders” as they cope and help each other deal with all the various incarnations of the disease. They practice two days a week at the Miami Rowing Club on Virginia Key.

“We come together as a family,” said Victoria.

“It’s amazing all the different walks of life, all ages, and stages. We have a common bond and our team goes very deep and we have fun and we are traveling around. We have raced against other teams that are not breast cancer survivor and we hold our own and that’s so empowering.”

“I must say I keep saying breast cancer survivors no…thrivers…I consider myself a beyonder; beyond breast cancer.”