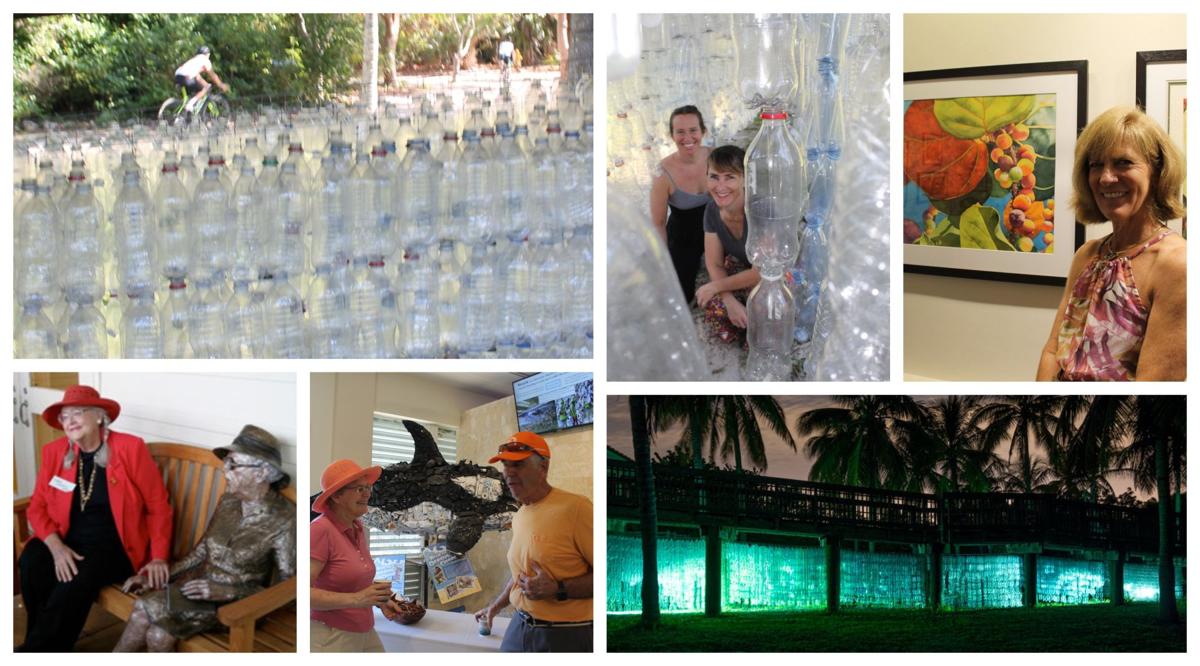 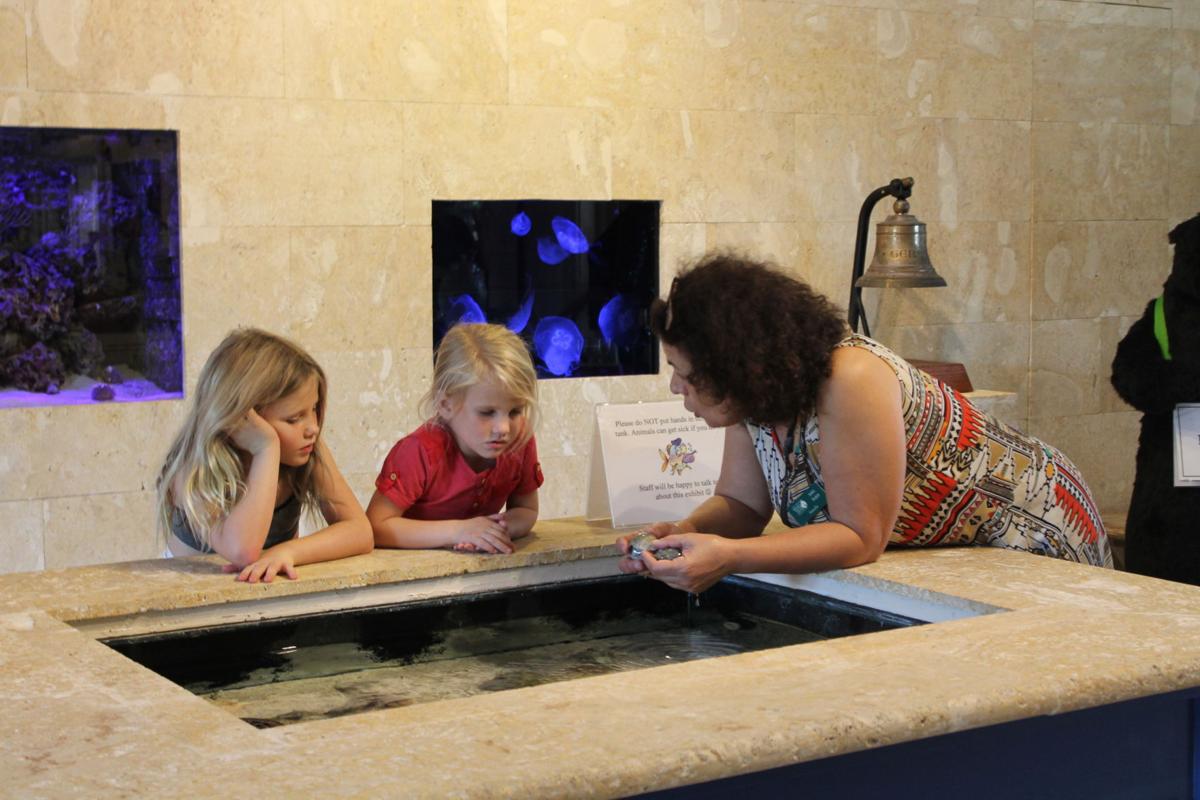 BNC volunteer Amel Saied shows Abby and Garrett Coleman a sea urchin from the hands-on aquarium while mom India enjoys the art show in the next room.   Photo by Raquel Garcia 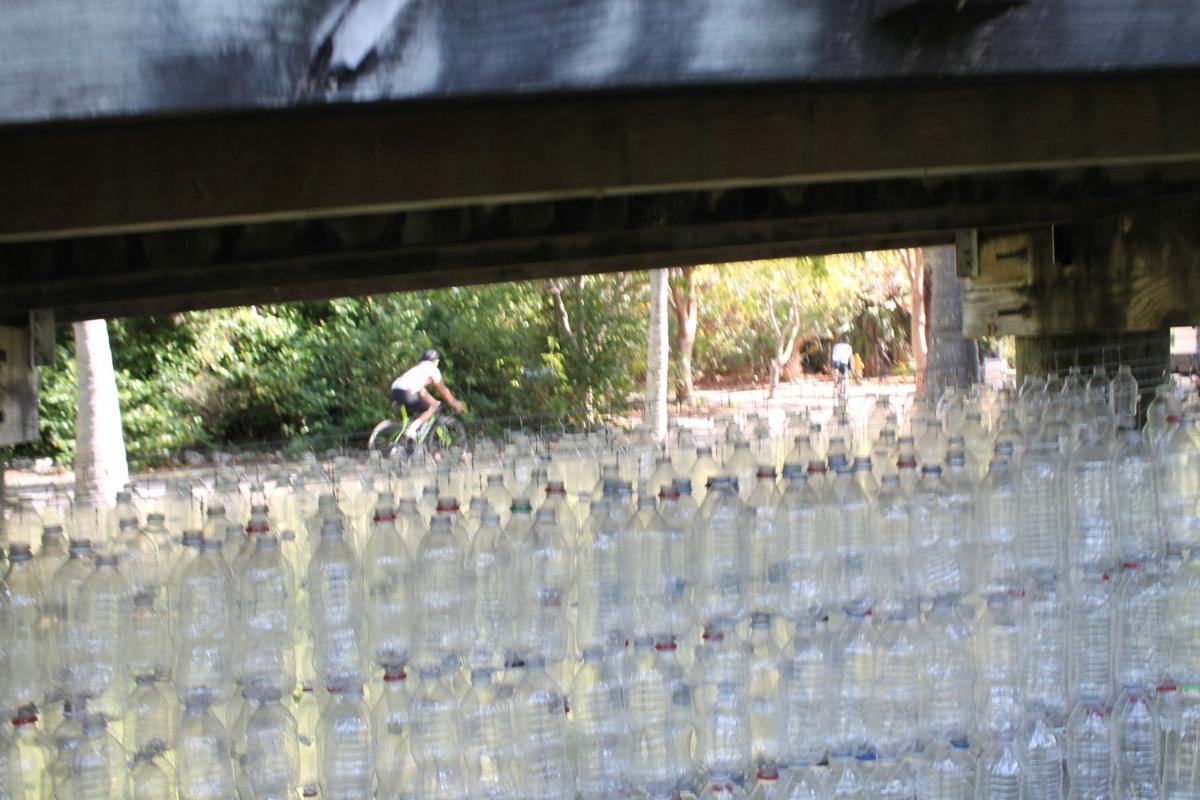 Bikers appear to be riding on a trail of suspended recycled plastic bottles from this perspective view of the “Waterway” sculpture on exhibit outside the BNC.  Photo by Raquel Garcia 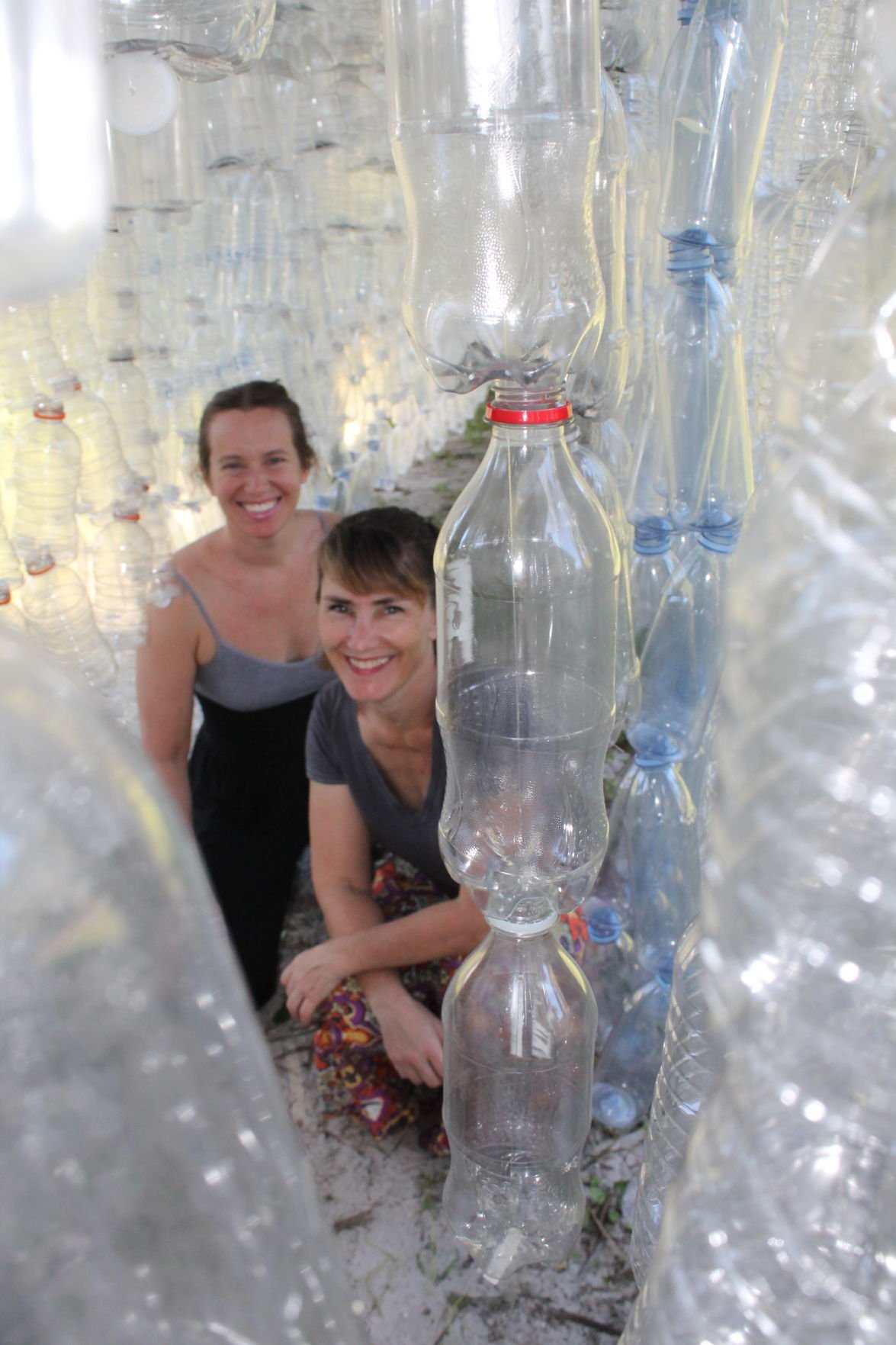 Artists Christin Paige Minnotte (L) and Jenna Efrein in the midst of their “Waterway Immersive Sculptural Experience” made of thousands of threaded plastic bottles collected and contributed by themselves and friends supportive of the project.  Photo by Raquel Garcia 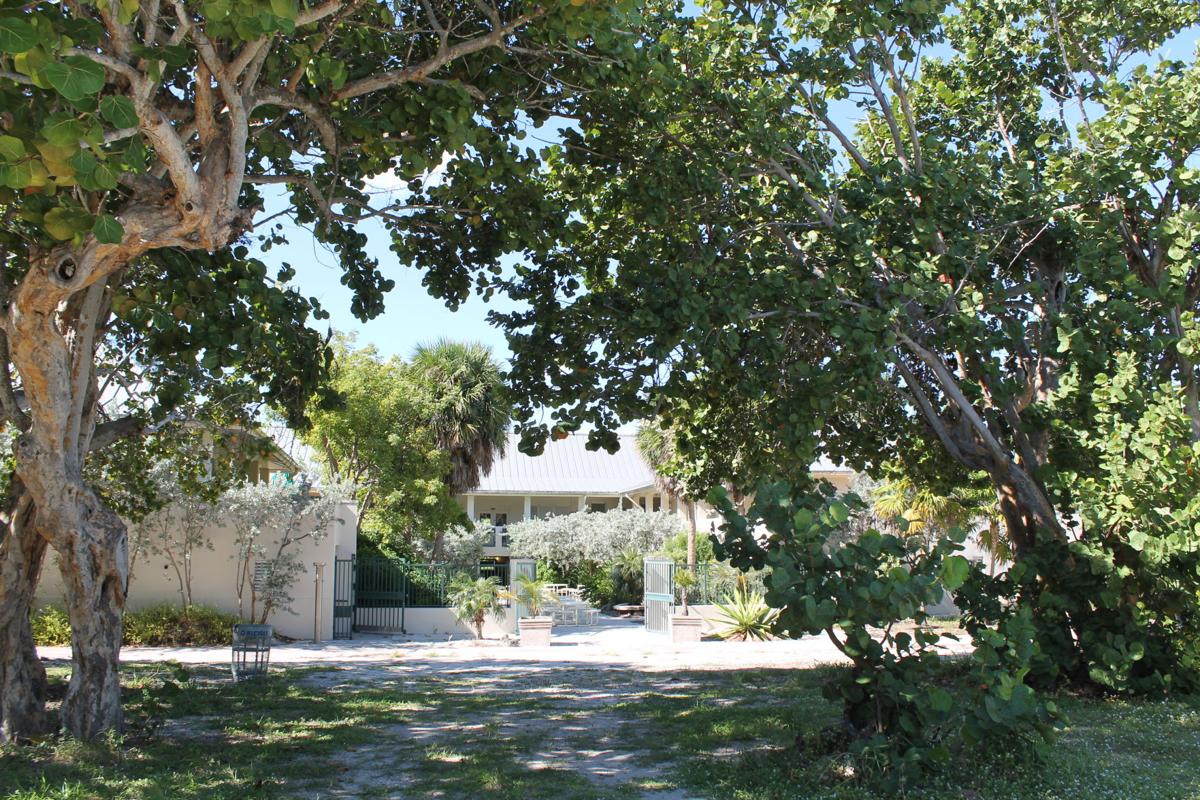 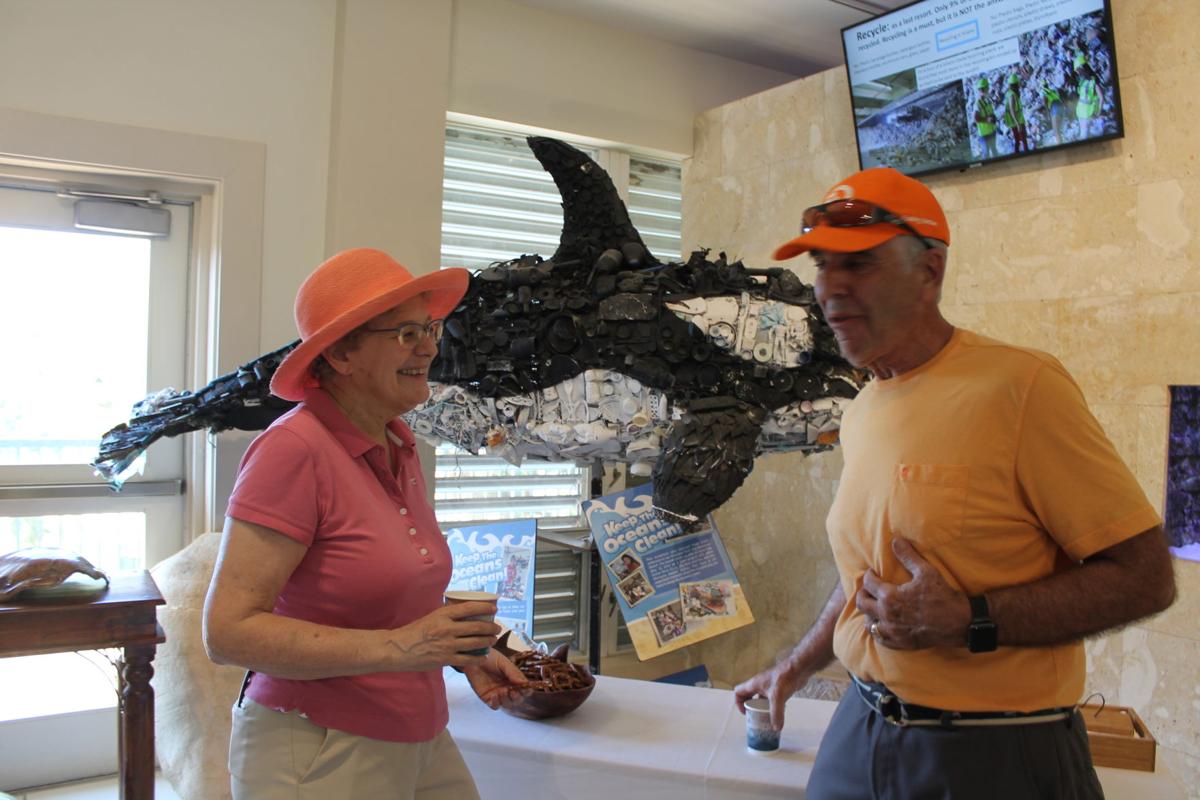 Key Biscayners Joan and Paul Gluck share a laugh at the snack table below the floating Orca sculpture made out of trash recycled from a BNC Beach Clean Up in 2012.  Photo by Raquel Garcia 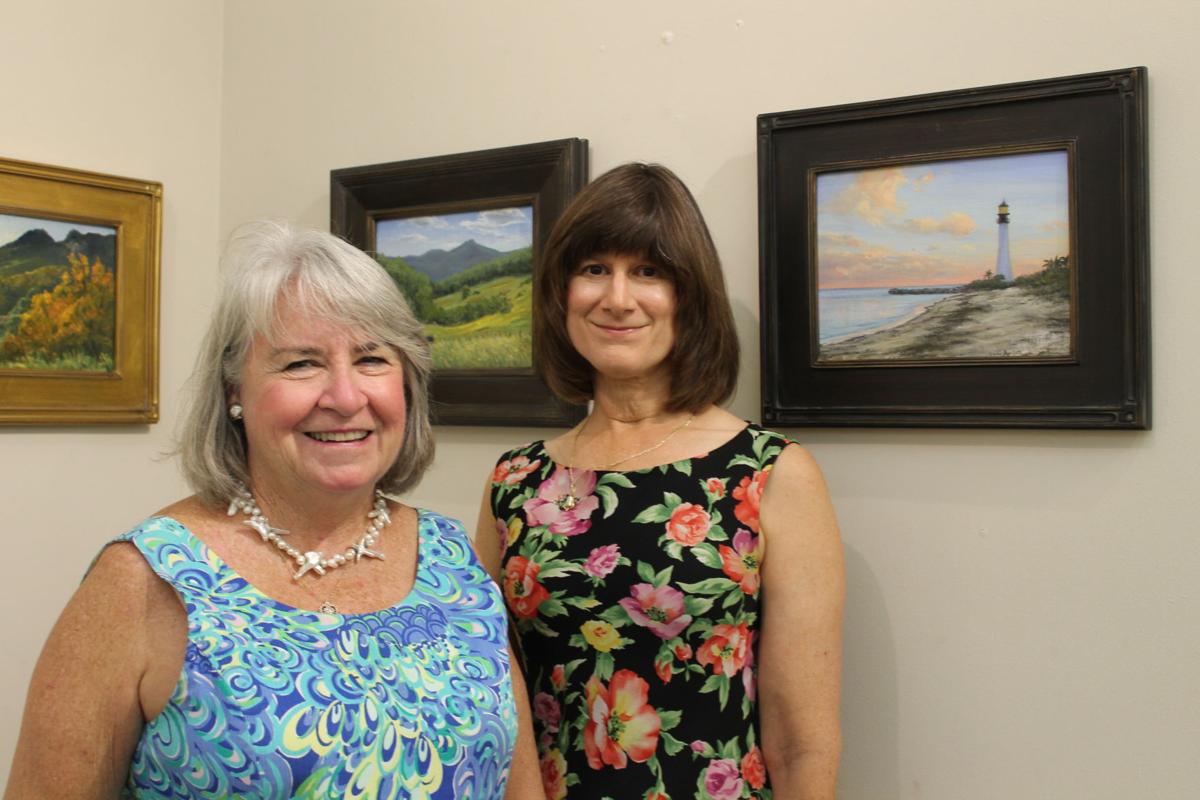 BNC executive director Theodora Long with plein air artist Linda Apriletti whose exhibit “Landscapes: Mountains to the Sea” oil paintings preceded the current “Outpost Artist” Lary exhibit in a proud tradition of over 100 artists displaying nature-themed work at the center dating back to their 2000 grand opening. Photo by Raquel Garcia 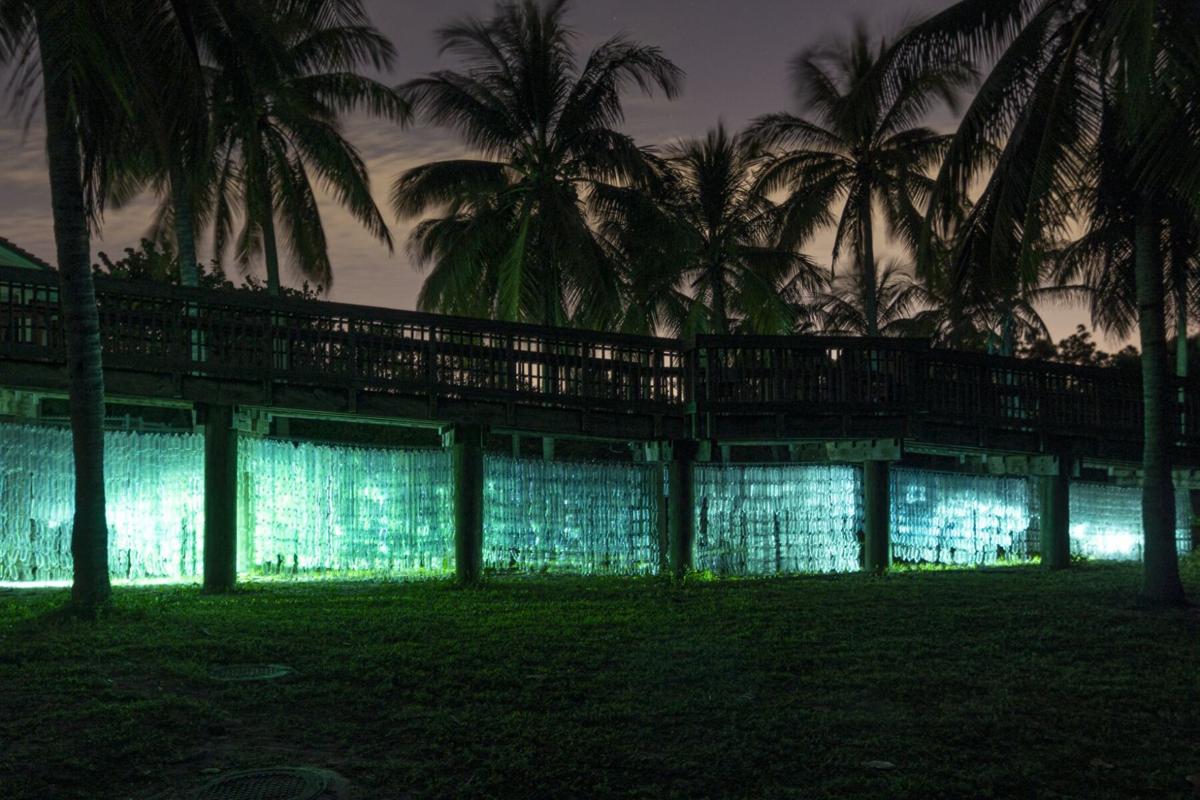 An evening view of “Waterway” shot using reflections of color projected onto the bottles. According to the artists: “Moving through the piece is a palpable, dynamic sense of the beauty of the ocean environment contrasted with a suffocating amount of plastic.”  Photo Courtesy Christin Paige Minnotte 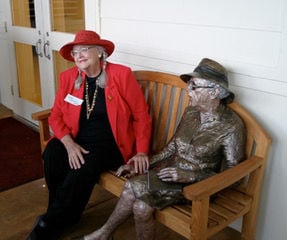 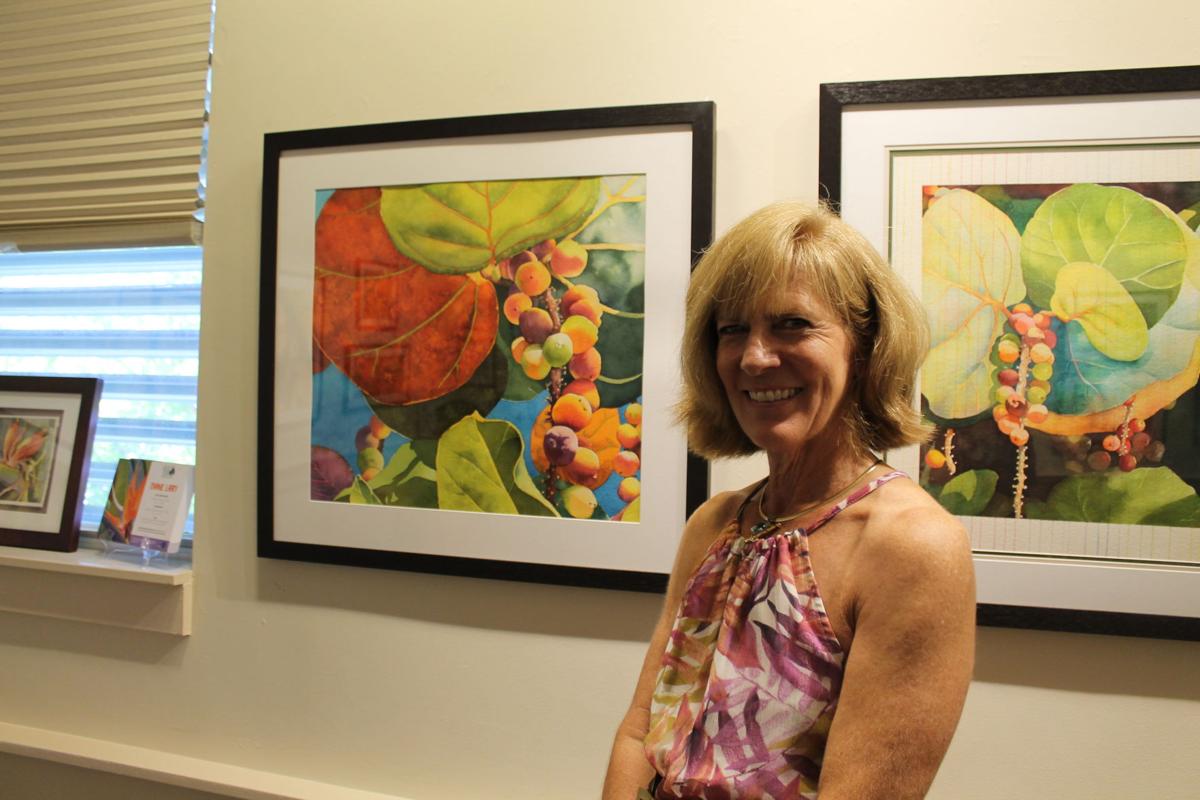 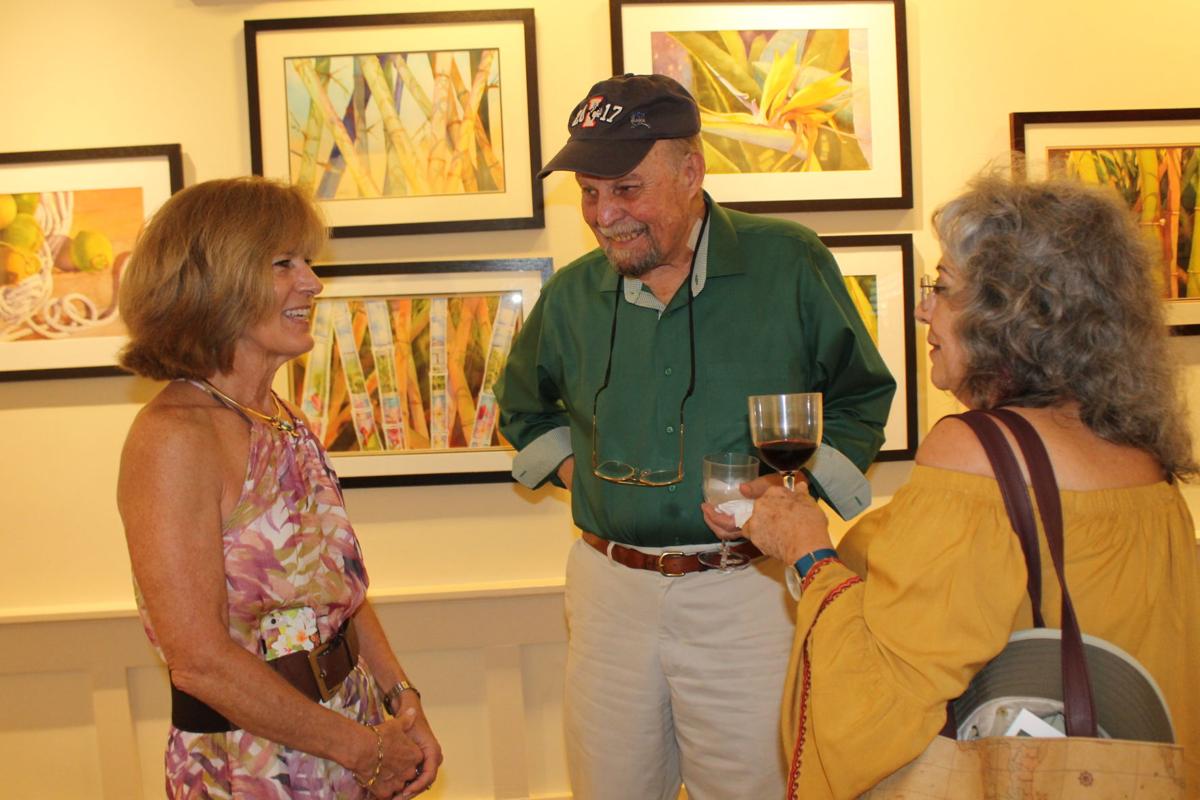 BNC volunteer Amel Saied shows Abby and Garrett Coleman a sea urchin from the hands-on aquarium while mom India enjoys the art show in the next room.   Photo by Raquel Garcia

Bikers appear to be riding on a trail of suspended recycled plastic bottles from this perspective view of the “Waterway” sculpture on exhibit outside the BNC.  Photo by Raquel Garcia

Beauty of our environment, and the perils it faces, on artistic display for Nature Centers’ 20th anniversary celebration

It was a bright Sunday recently when Joan and Paul Gluck left their Key Biscayne home and biked against the throngs of cars coming onto the island.

The couple were heading to Crandon’s North Beach for a “Meet the Artist Reception” at the Marjory Stoneman Douglas Biscayne Nature Center.

“We look forward to coming to the openings here,” said Joan, a talented artist herself. She knew the featured exhibitor, Diane Lary, having painted with her at art workshops.

In addition to Lary’s 33 pieces in the gallery, there is an art installation of strung together recycled plastic bottles beneath the walkway leading up to the center: “Waterway” by artists Jenna Efrein and Christin Paige Minnotte.

Twenty years ago, when the Nature Center was being prepared to open, its organizers decided that artistic expression was to be an integral part of the environmental education center.

Over $4 million had been raised to create the center, thanks to the leadership of their founder: author, journalist and environmental activist Marjory Stoneman Douglas, who passed in 1998 at the age of 108.

“We thought it was important to connect art with nature by showcasing artwork that highlights the wonders of the natural world,” said the center’s executive director, Theodora Long. “The center has hosted exhibits for over 100 established and emerging artists, many from South Florida.”

Currently, a collection from artist Diane Lary is on display through March 1. Thirty percent of all gallery sales support the core mission of BNC’s under-served children’s programming.

This is Lary’s first solo exhibit. The Michigan native moved to Miami in 1991 for a research post. Once here, the now-retired biologist, met husband Todd and raised her family.

“As a kid I was always outside,” said Lary. “I rode horses and we had a lake-side summer cottage. I was drawn to nature … so inspirationally there for us to adore. I took some art classes and loved to attend the festivals. Then one Christmas my husband got me a set of watercolors, an easel, and a video camera.”

Lary applies a deft touch using bright colors in tropical scenes, with shadows and reflections highlighting the contours of her subjects.

In 2019 she won “Best in Show” at the St. Stephen’s Art Festival in Coconut Grove. Judging by the animated crowd at her opening, she has built a loyal local following.

The compelling urge to make a statement through art was what drove Jenna Efrein and Christin Paige Minnotte for their “Waterway” sculpture,. Their piece, however, reflect a different type of environmental perspective.

Their joint exhibit, open through Feb. 23, is part of the “Disposable Ethic” series, which is meant to jar the viewer into rethinking our dependency on plastic.

“It’s designed to illustrate aspects of the environmental crisis,” said Efrein, a full-time art lecturer at the University of Miami. “We are mimicking the conditions of the plastic in the water so people can experience (this hardship on nature) via the sculpture.”

The introductory description to the “Immersive Sculptural Experience” asks the observer to swim through the thousands of plastic bottles hanging together so they can see, hear, and feel what it is like to live in today’s oceans.

The statistics cited are also impactful: 50 billion plastic bottles pollute the oceans, and about one million marine animals die each year from the plastic waste.

The contemplative art exhibits now at the Nature Center can be viewed daily from 9 a.m. to 4 p.m.

The center’s artist-in-residence, Jacqueline Roch, will resume her five-week “Ready, Set, Paint!” class for adults (all mediums and all levels) on Tuesday, Feb. 4.

Get to know the Wisconsin Badgers' 2020 basketball scholarship recruits