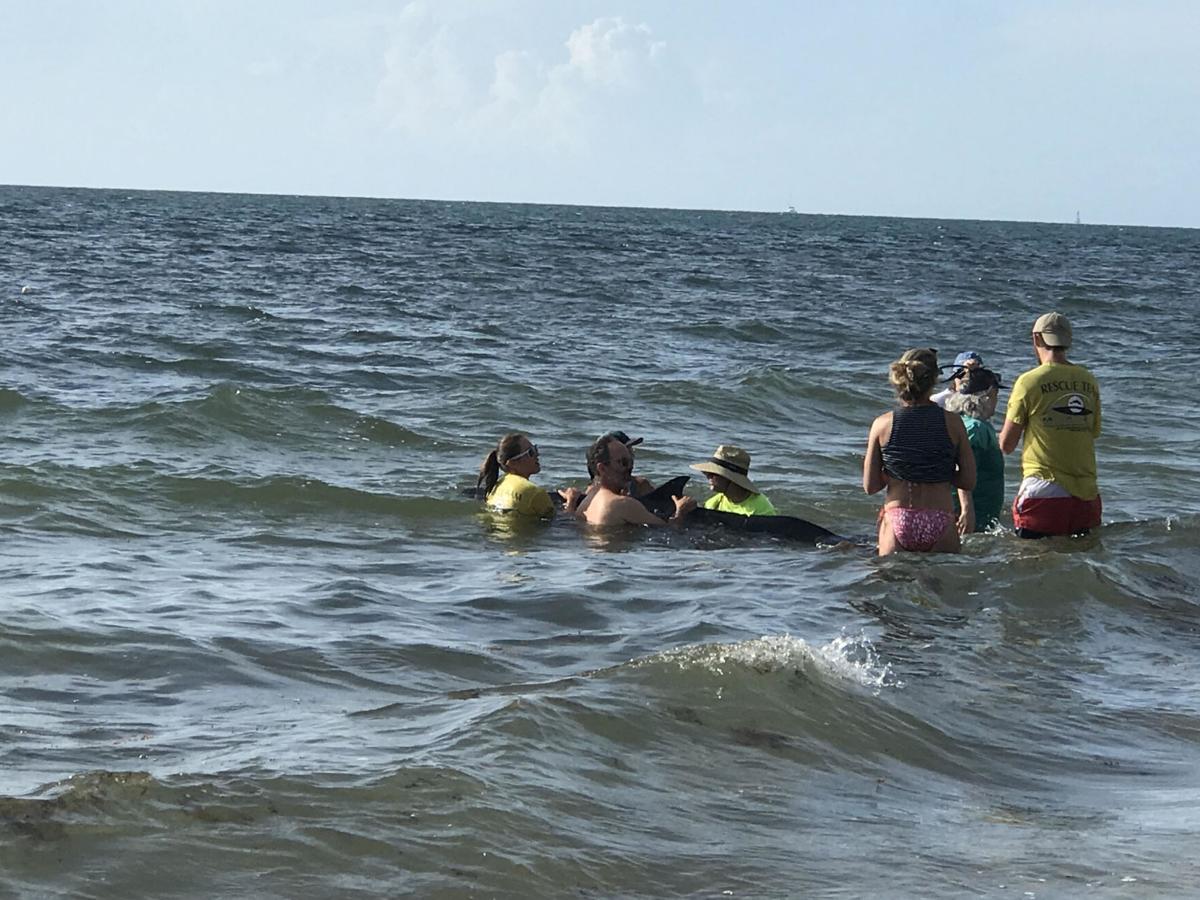 Volunteer Darrell Nicholson (on right in hat) with fellow volunteers

they wait arrival of NOAA biologist and veterinarian. Photo Courtesy 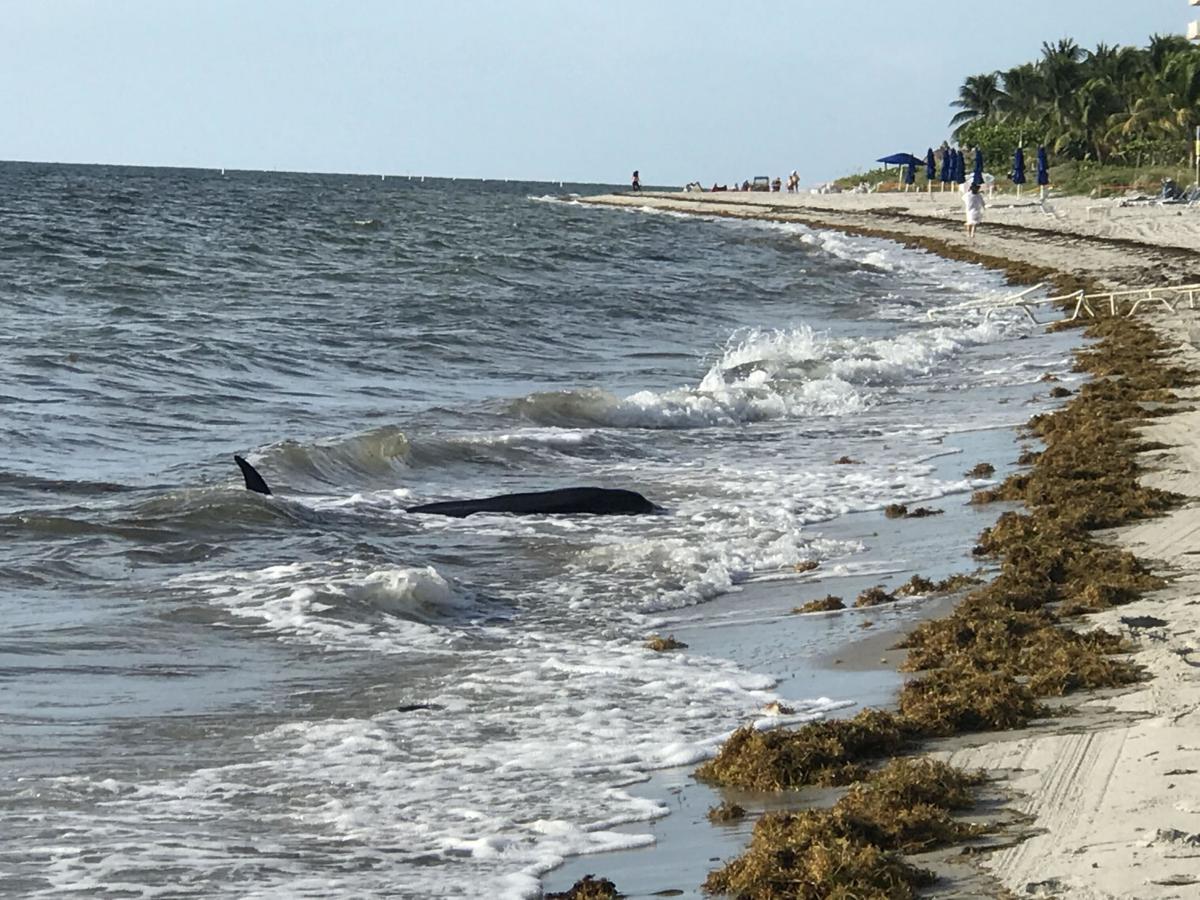 by law enforcement until NOAA stranding network partners from 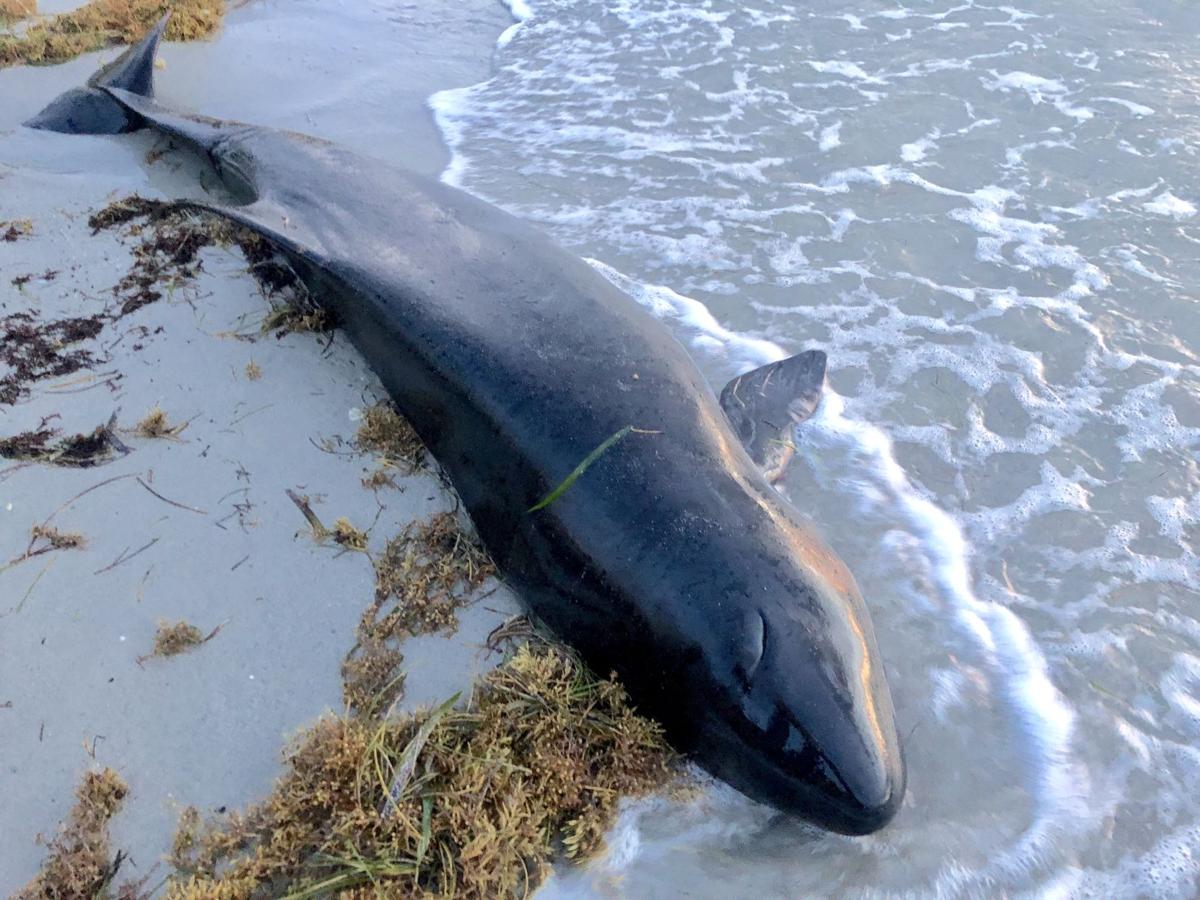 Deceased baby dwarf sperm whale found near The Towers, about a quarter of a mile from her dying mom. 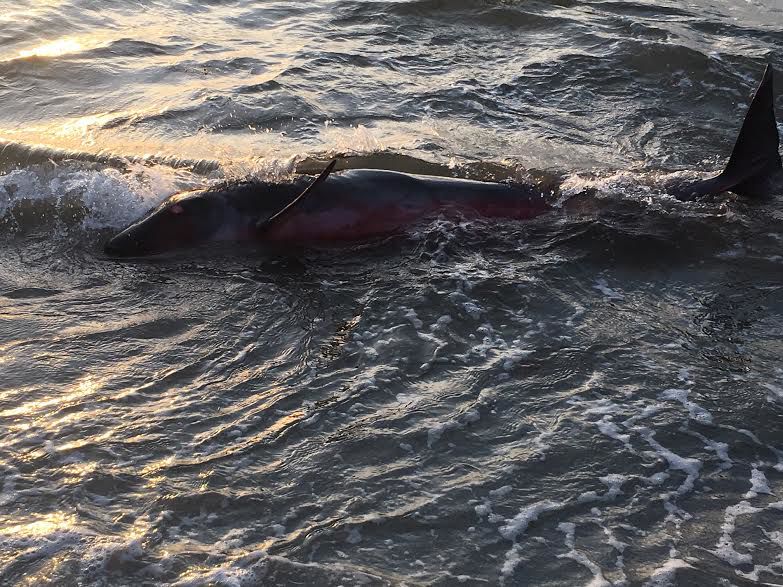 Volunteer Darrell Nicholson (on right in hat) with fellow volunteers

they wait arrival of NOAA biologist and veterinarian. Photo Courtesy

by law enforcement until NOAA stranding network partners from

Deceased baby dwarf sperm whale found near The Towers, about a quarter of a mile from her dying mom.

On the morning after the Fourth of July, the sun had barely risen at 5:50 am when Sonia Elias-Reyes de Rivera was taking her daily 45 minute walk along the beach. She was the first human to come upon a unique discovery; an adult female dwarf sperm whale lie beached along the Ocean Club shoreline about a quarter of a mile away from what was apparently her dead calf.

The sick mammal had a four inch deep gash; a laceration along her dorsal fin of about a day old according to the veterinarian who had to euthanize her later that morning. But before the tragic final outcome, four local agencies were involved, at least five volunteers, as well as various onlookers, including one that ended up in handcuffs.

“I touched her and she lifted her tail up high…it surprised me. I couldn’t move her to put her back in the water.

“I felt helpless and in awe of seeing such a beautiful animal on the beach.”

She first called 911 and said three police officers came out right away.

From there the Florida Fish and Wildlife Commission (FWC) was contacted, then Miami-Dade County DERM, the Marine Animal Rescue Society (MARS) volunteers--the stranding network partner for the National Oceanic and Atmospheric Administration (NOAA) on Virginia Key, and NOAA officials.

MARS volunteers and beachgoers worked together to comfort the whale in the early morning, lifting her to stop from bumping on the hard shore and rest in about three feet of water until NOAA’s biologist Dr. Jenny Litz, and veterinary pathologist Dr. Julia Zaias, arrived on site.

“It’s always very sad for anyone who responds, and difficult to euthanize any animal,” said Dr. Zaias who is a research associate professor on University of Miami’s main campus in Coral Gables, and also teaches Marine Mammal Medicine at RSMAS.

“One of my roles is to take the animal out of pain and suffering. More often than not for these guys its euthanasia. The chances are remote it would survive. It is obviously in distress, out of its habitat, so sick it can’t even swim, and separated from its baby.”

The lactating female was found to be extremely malnourished and expressing an increasingly rapid breathing rate.

“(The rapid breathing) is not a good prognostic sign. I did a physical exam…listened with a stethoscope, she had a one or two day old lesion, and with what we know about this species there was no other option but to euthanize.”

Zaias has been the MARS veterinarian on call for nearly 20 years. She said that in that time she has seen about 20 or 30 beached dwarf sperm whales, about one or two a year.

She explained the result has always been to euthanize because they are such deep sea creatures that if they make it to the shore, having not yet been eaten by a shark in that weakened state, their survival rate is unlikely. Even if there had been a rehabilitation tank resource nearby that could have cared for her; due to the stress of a wild animal being in captivity her prognosis would be similarly grim said Zaias.

“The necropsy preliminary results were sepsis and she was severely impacted in the colon. (Final results are anticipated in about four to six weeks). She was very dehydrated and couldn’t keep feces moist enough so it got stuck and severely impacted. (Sepsis) is the result of an infection that’s spread throughout the body, a multi organ infection,” said Zaias.

The gash may have been caused by a propeller due to her compromised weakened condition but not germane to the cause of death according to the doctor. Volunteer on site Darrel Nicholson got a close up view of the injury as he tried, with at least four others, to keep the whale afloat with MARS volunteers.

Holiday weekenders on the beach try to help

Darrell grew up on the key and is a serious sailor who spent 10 years traveling the world from the water, even helping to successfully rescue a Risso’s dolphin while in Bali. He was visiting from Sarasota and walking along the beach with his mom Allene Nicholson, sister Lara, and son Jake, when they came upon the whale.

“It was sometime before 8, my mom walks the beach pretty regularly in the morning. She has been living on the key since ‘72 so she is a regular fixture on the beach. There was a woman who was very upset (about the whale) rolling in the surf, flopping its tail, and still alive.

“The police had arrived, there was yellow tape on scene, beach chairs formed a barrier, and a person was seated on the sand. A 20 to 30 year old male with hands behind him detained for trying to help the whale,” said Darrell.

Allene said she couldn’t stand to see the whale alone floundering in the water and wanted to leave but then the MARS team arrived and they decided to stay.

“When I saw the MARS people coming I was encouraged but the whale’s tail was flopping very weakly. It was very sad when they put her down. They wrapped her up and put her in the jeep,” said Allene.

“Dwarf sperm whales are very rare and people haven’t been able to see them (alive) in the wild.”

The MARS volunteers asked for help from those gathering around and this is when Allene’s son Darrell, and his 14 year old son Jake helped hold her steady along with a few others present.

“You could feel her heart beat right under the chest…clearly alive and a pretty deep gash in the tail,” said Darrell.

“She was very weak and had trouble staying upright but would lift her head to breathe. It was amazing, holding a marine mammal and being that close to one, a very powerful experience. There is so much anthropomorphizing…but you did feel like you had some sort of connection.

“When I sat down in the water with her I had a moment…she really needs our help…she was looking right at me…she just seemed…like she was thanking you but you could also tell that she was very tired and very weak.”

Lead coordinator for MARS, Pamela Sweeney, said she was placed in the dorsal ventral position.

“The dorsal is facing the sky and belly facing the bottom so they are upright…then they can protect the animal from water entering the blowhole and volunteers learn how to take breath counts and a heartbeat and do an overall physical assessment. (She was determined to be) very emaciated and clearly not in good body condition,” said Sweeney.

NOAA biologist Jenny Litz arrived not long after the 6:59 am stranding call was received.

“This animal had a long term illness and had not been eating…they live in deep waters off the continental shelf,” said Litz.

Litz also determined the calf had not been immediately birthed because she said the umbilica was healed and fairly small.

She wanted to spread the message that when finding a stranded animal along the shore to not touch it until trained volunteers arrive on the scene.

“It is important not to push an animal back out,” said Litz.

“They come in for a reason, and there is a problem, so pushing them out can prolong their suffering.”

KB Police Chief Charles Press said when they are called out about incidents like this they refer it to the FWC and their role on site is crowd control.

He explained why the man was handcuffed during the beaching.

“There was a private citizen who got over excited and disobeyed police orders and tried to rescue the mammal by himself and he was restrained,” said Press.

“After talking to him, calmer heads prevailed. He was saddened by the situation and meant no harm, no harm no foul. We then did the right thing and let him go home.”

Press could not say how long he was detained. When asked if he was subsequently allowed to help with the relief of the whale when MARS asked for volunteers to help move her, he had no comment. He later added that this is the first time a dwarf sperm whale has beached on the key in his experience.

“I don’t recall this happening under my watch, this is rare.”

“In the past 10 years there have been about 20 bottlenose dolphin strandings in Miami-Dade and Broward, for an average of about two per year. There have (additionally) been three pygmy sperm whales, two dwarf sperm whales, four beaked whales, and two sperm whales in the same time frame.”

Sweeney received a call during the interview with Islander News from her stranding coordinator regarding a possible mass stranding off Key West of a school of false killer whales.

The agency representatives said it was unlikely the recent Fourth of July fireworks had any impact on the occurrence.

de Rivera was not so sure.

“After the Fourth there was so much trash on the beach…beer cans, magazines that people had been reading, lamps that glow at night, chairs, flip-flops, tons of beer cans…it was really sad. I don’t understand why people can’t leave the beach as they found it.

“I would hope that this experience raises awareness…we live in a lively ecosystem and whatever we do has repercussions on them. We can go to the parks and raise awareness and help contribute in a positive way.”

Darrell’s son Jake said he wasn’t profoundly moved especially while helping his dad and others calm the whale but it did make an impact.

“I’ve been training in marine biology for about two years now and this just cemented that this is the kind of stuff I want to be doing, saving…”