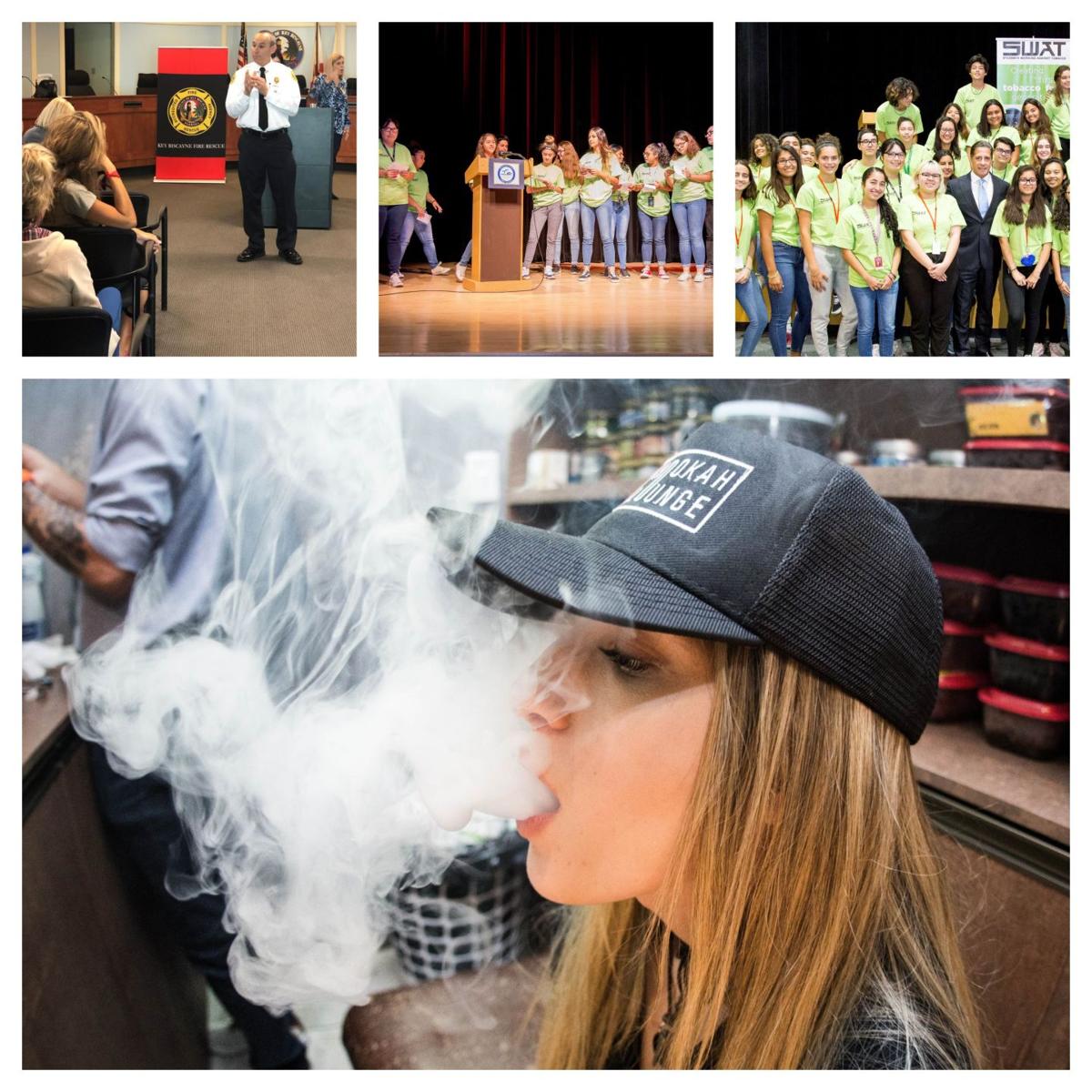 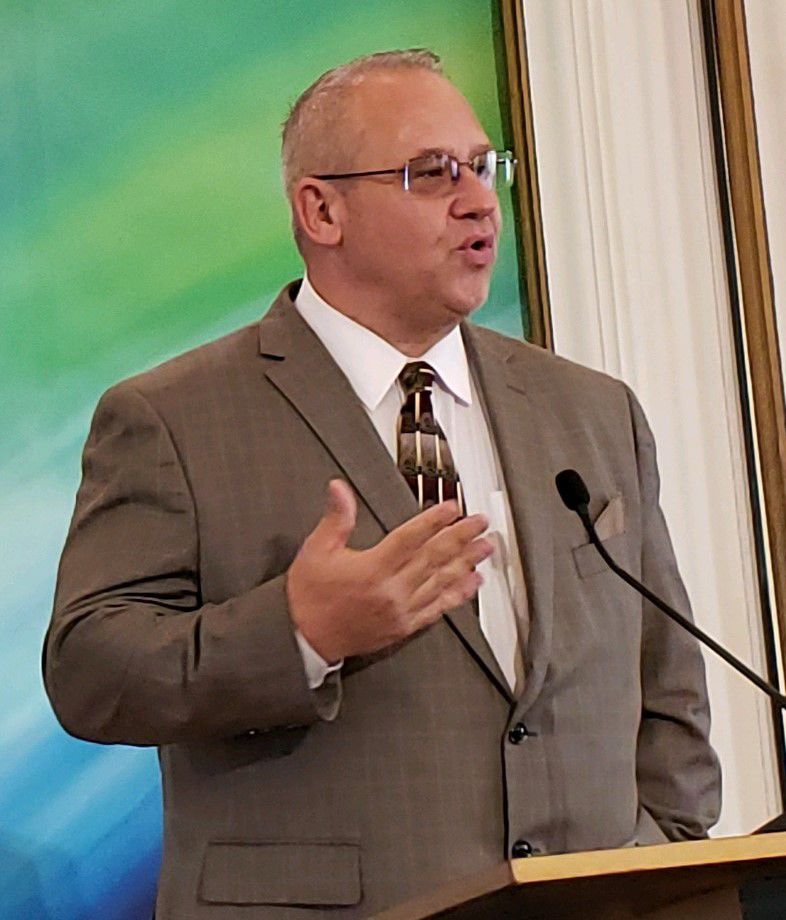 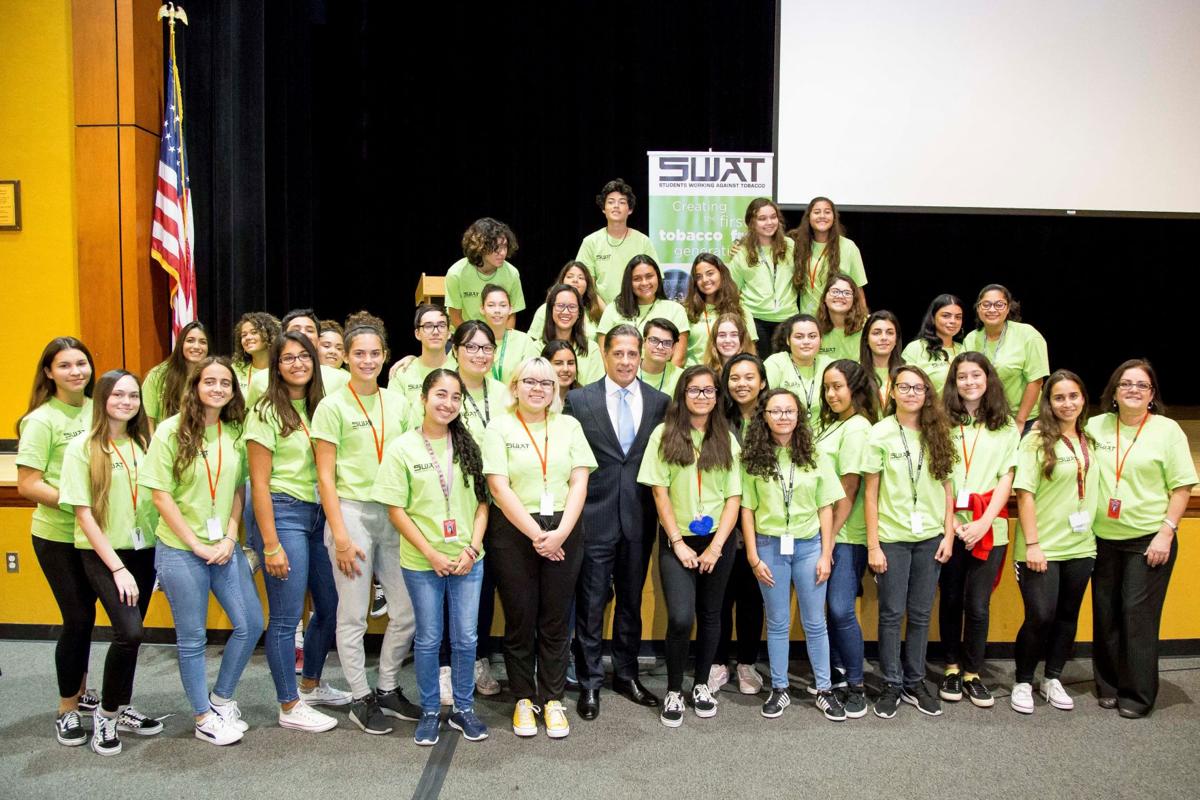 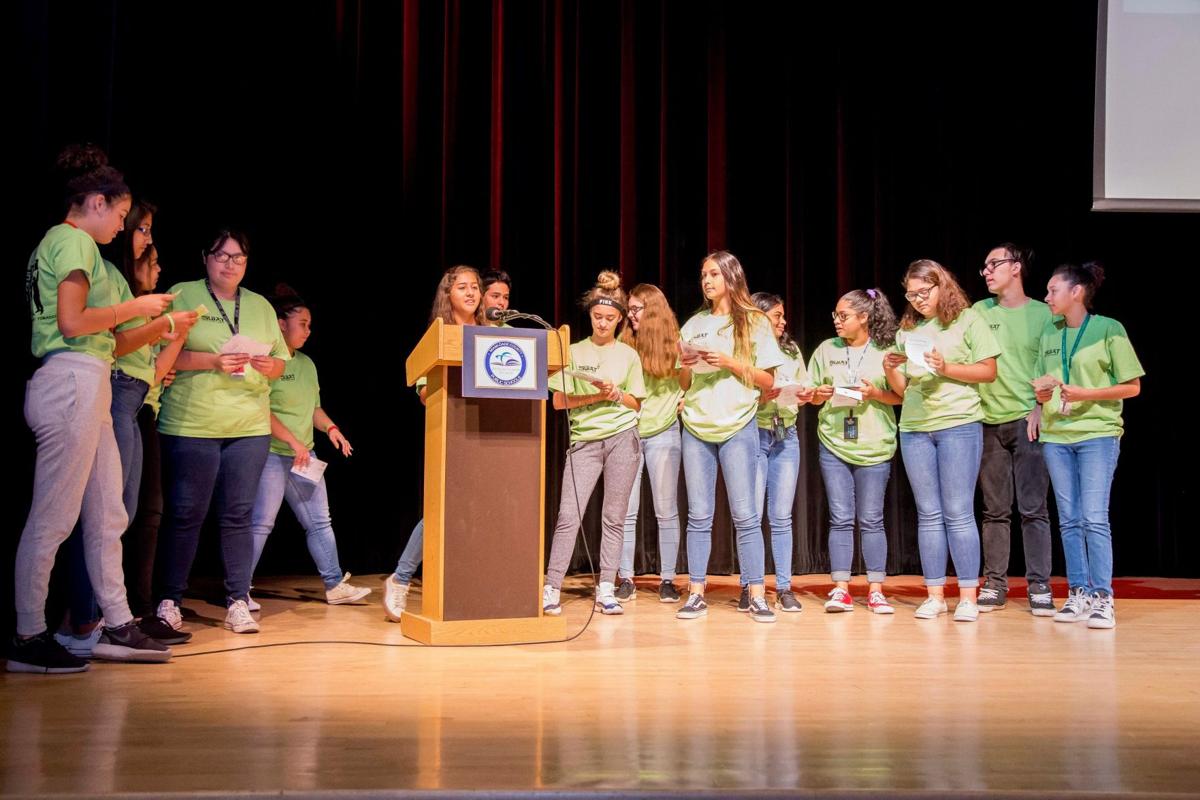 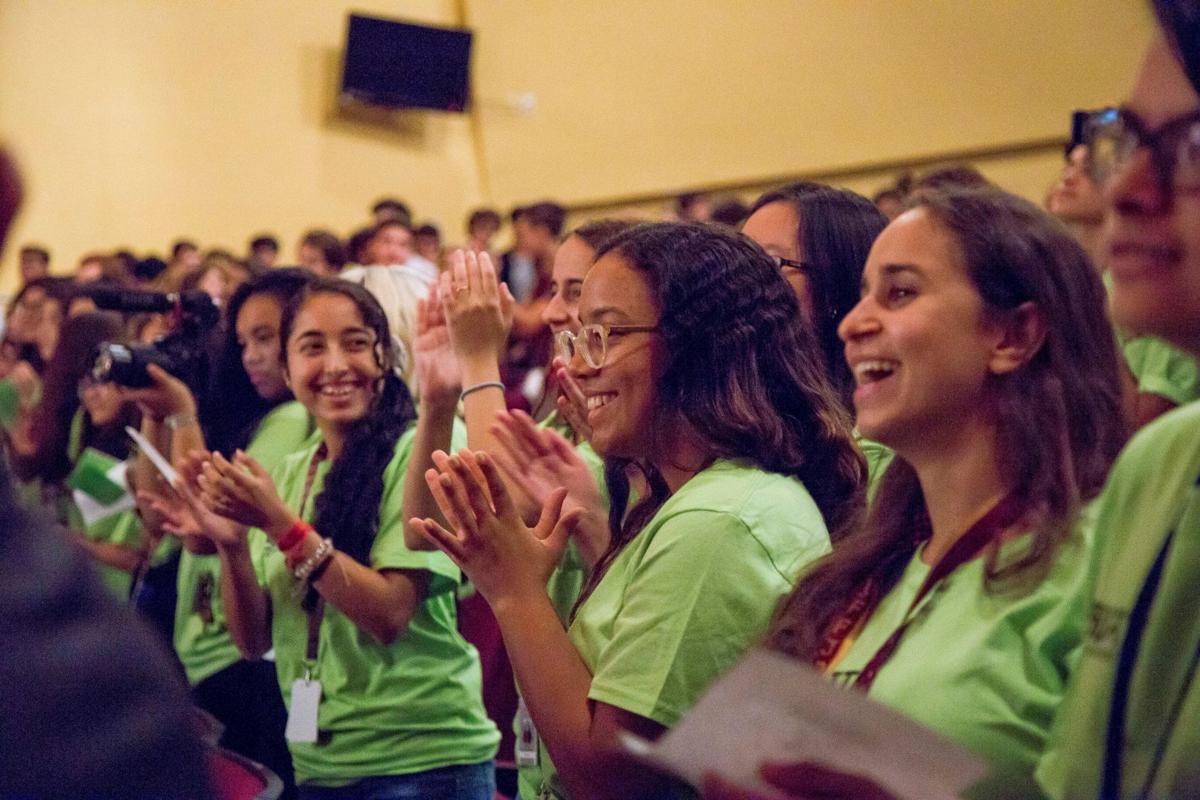 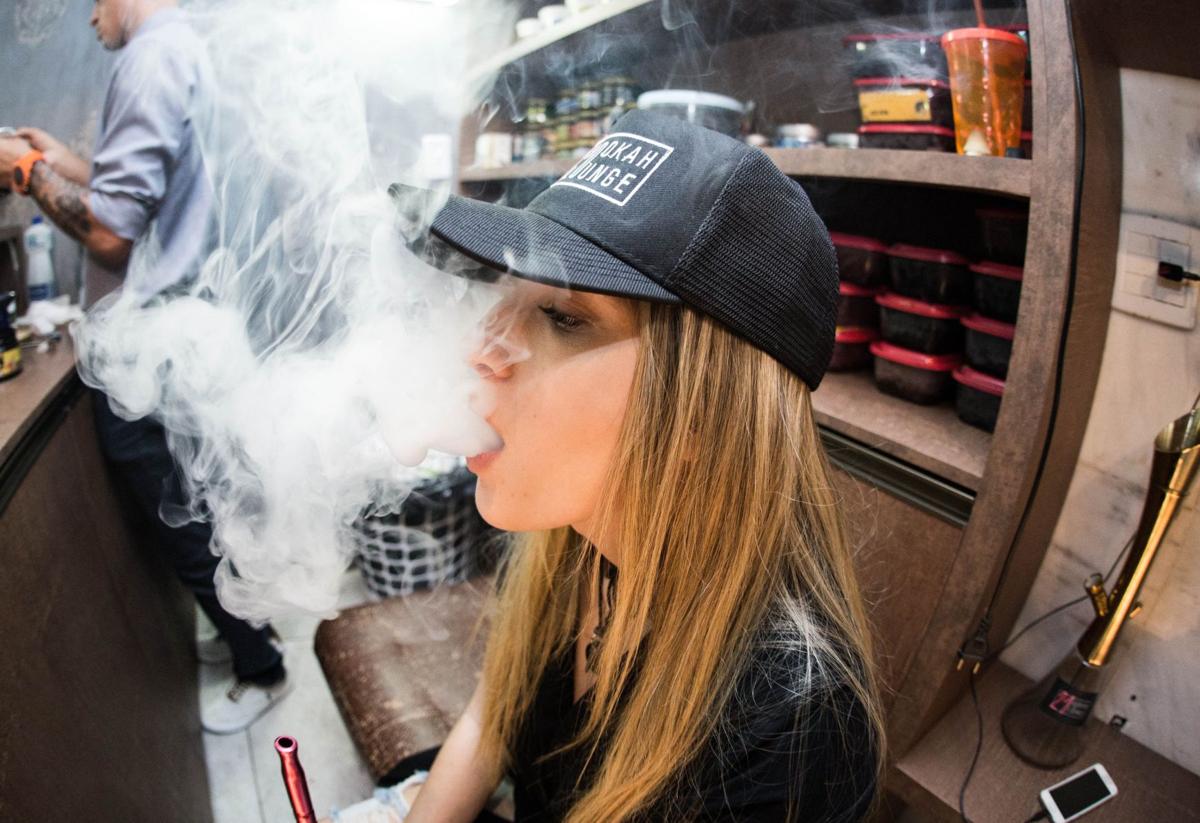 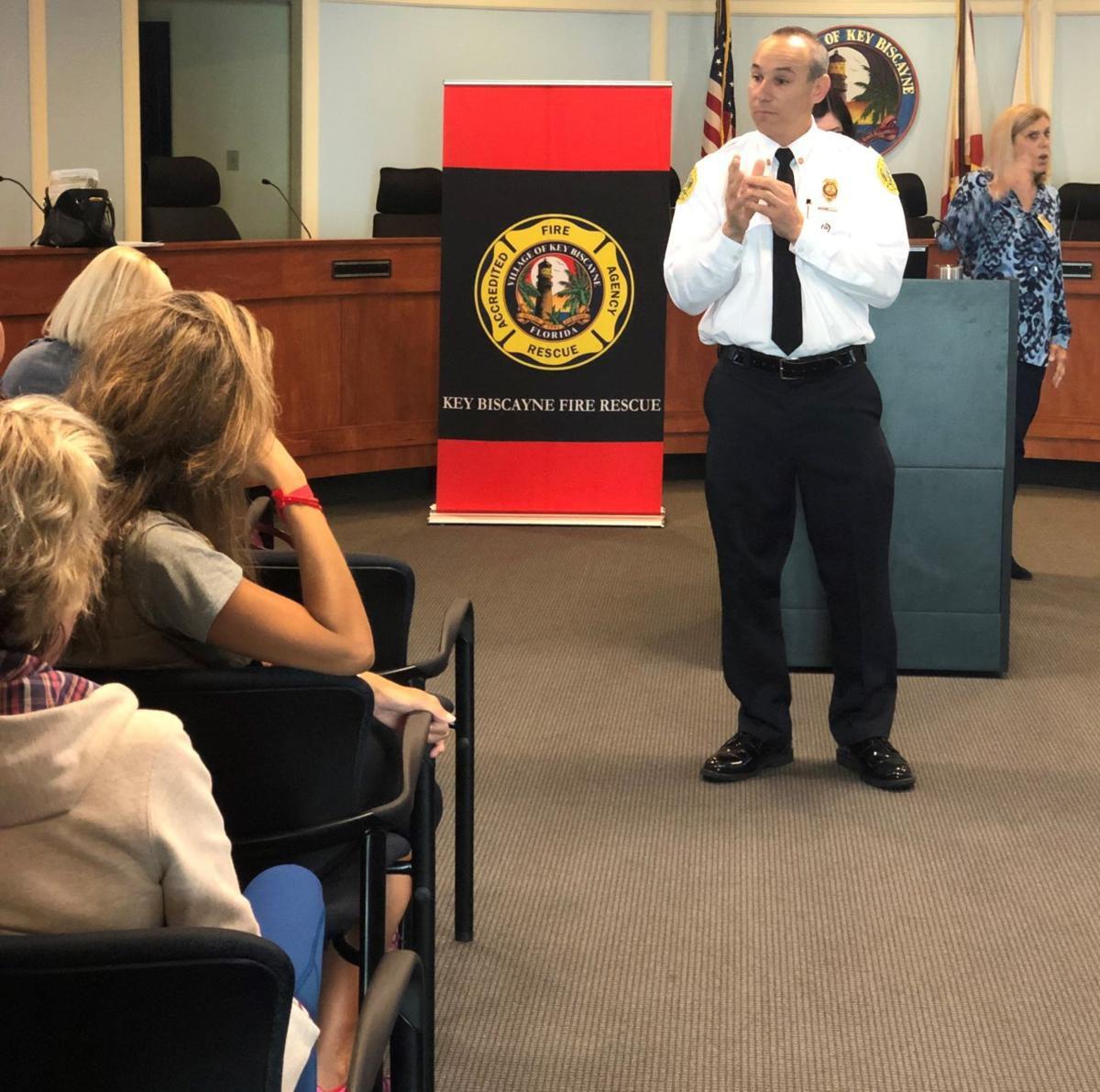 Widespread use of e-cigarettes and vaping a growing concern

As the latest public health crisis sweeps the nation, the Key Biscayne community and beyond grapples with the rise of teenagers hooked on vaping nicotine, CBD and THC-infused liquids.

And now a crisis is billowing nationwide of lung diseases and deaths being attributed to vaping.

Local parents, school administrators and community members are extremely worried about “juuling” and they are banding together to fight the epidemic, said a Key Biscayne parent who requested anonymity. The concerned parent has seen vape devices and pens littering the island. Where cigarette butts were once found, now empty vape cartridges are appearing.

Juul, which looks similar to a USB drive, is the most popular vape manufacturer in the US. The company is being investigated by the Federal Trade Commission, accused of marketing its line of fruit-flavored nicotine juices to teens.

The company issued a statement saying that Juul Labs has never targeted youth, and that it has implemented a series of measures to “combat the issue of youth access, appeal, and use of vapor products.”

Vapes are sold in specialty vape shops, gas stations, convenience stories, kava lounges and online, where a minor can easily lie about their age to make a purchase.

Vape devices also can be used to smoke THC, the principal psychoactive constituent of cannabis, which is illegal in Florida, and substances like CBD. The electronic cigarette, vaping and CBD markets are essentially unregulated.

Now, however, with public outcry over vaping-related deaths and mysterious lung injuries, government officials are increasingly cracking down on the nascent industry that is, for some critics, dubbed Big Tobacco 2.0.

President Donald Trump called for a federal ban on flavored e-cigarettes and flavored vaping liquids. The FDA is requiring e-cigarette makers to submit their products for approval by May 2020. Michigan has already banned them, and New York is set to do the same. Even in San Francisco, where Juul is headquartered, e-cigarettes are now banned.

Some big businesses are following suit. America’s largest retailer, Walmart, said it would cease sales of vape products and e-cigarettes at its U.S. locations. Sam’s Clubs will do the same when the products sell out.

Last week, the Center for Disease Control reported that seven people have died from vaping in the U.S. An eighth vaping-related death was reported in Kansas on Monday, Sept. 23. In addition, more than 530 people have been hospitalized with vaping-related lung injuries, according to the CDC.

A spokesperson for the Miami-Dade County Public School system said the district is unaware of any vaping related medical emergencies involving students. But the district is part of a proactive movement combating the e-cig industry.

In late 2018, the district, the Florida Department of Health in Miami-Dade and the Miami-Dade chapter of Students Working Against Tobacco, which is a Florida statewide youth-led group, hosted “Not A Lab Rat Day.” The event, held on the third Wednesday of October, helps empower youth to stand up against the e-cigarette industry.

At the event -- to be held Oct. 16 at a location to be determined -- participants learn facts about the harm caused by e-cigarettes, which can be highly addictive.

Key Biscayne Fire Chief Eric Lang said he started receiving complaints from concerned parents that their kids were vaping and using e-cigarettes about a year ago.

He says parents should seek help from a mental health professional if they believe their kids are vaping. Lang said he sees more addictive type behavior than ever before among the under 21 population.

In 2015, Lang’s department started seeing a higher volume of drug-related emergency calls. It was three times the usual amount, he says. This led him to take action with Police Chief Charles Press to start Teen Talks, an initiative for the younger generation to get together in small groups to talk about what was bothering them.

“I remember getting this one call,” he said. “It was a 19-year-old that was calling 911 for a 17-year-old kid who was having an overdose on Key Biscayne. I’ve heard thousands of 911 calls and this one rocked me. I knew that I had to do something because we’d already had at least one or two opioid deaths that year.”

While researching for one Teen Talk presentation, Lang realized a slide captured an troubling correlation. The statistic noted that “if you start drinking at the age of 13, you have almost a 50 percent chance of getting addicted to something.”

He continued: “I think that is so important because when you talk about addiction and the developing brain in our youth, it shows that early prevention is so important.”

Involvement in kids’ everyday lives is key to helping combat addiction, he said.

Vaping marijuana and THC is not something to see as benign, said Marie Guma a Teen Talk team volunteer, mental health counselor and substance abuse professional. Parents need to be aware that the concentration of THC is much higher than ever before, she said.

Known as “dabbing,” high-potency THC, smoked in a vape device, can induce psychosis in users, said Guma, noting that she has personally treated minors for THC-induced schizophrenic symptoms.

A former addict, DeLeon has made two documentary films, “Kids are Dying” and “American Epidemic,” detailing the addiction crisis across society. He makes hundreds of school presentations each year across the U.S. Three years ago, he conducted all-day presentations at MAST Academy and the Key Biscayne K-8 Center.

Recounting his presentation, DeLeon said he asks a series of questions a few minutes into his talk.

“I said raise your hand if you know a high school student who drinks alcohol, and about 60 percent of the kids raised their hands.”

Then he asked, “Raise your hand if you know a high school kid that smokes weed. Now, it's funny to them, because it's an adult in a school setting, asking them a question like that. So they think it's funny. Secondly, they think marijuana is cool. Because the country's telling them it’s cool. Hollywood says it is cool, right?

Then DeLeon asks the students to raise their hand if they know a high school student who vapes. “All the hands go up, and they're laughing hysterically.”

While the students laughed, adults in the room shook their heads. “We adults understand. We understand this is Tobacco 2.0. And the kids don't get it,” he said. “Big tobacco invented e-cigarettes.”

Vaporizers are inherently unhealthy. He warns they do not use water to heat up liquid, a misunderstanding he often hears. Instead it contains nicotine salt, volatile chemical compounds and metals. One vape pod is said to be the equivalent of a pack of 20 cigarettes. But DeLeon suspects it’s closer to four packs.

“We're going to see pulmonary disease and respiratory disorders become the number one cause of death in America,” he said. “People don’t understand how bad it really is.”

Cigarette smoking causes more than 480,000 deaths a year, according to the Centers for Disease Control and Prevention

“If we don't get to the origin of addiction. If we don't talk to these kids in high school and middle school. (If) we don't deal with the three drugs that puts them on the path in the first place, we’re never going to solve this problem. And the three drugs . . . are alcohol, marijuana, and nicotine.”

For more information and infographics by the Centers for Disease Control on Youth tobacco usage, click here.

Disney World and SeaWorld get the go ahead to reopen

2020 Mazda CX-30: It makes the case that the world can use yet another small crossover

Still Undecided About College This Fall? Know These 4 Options

Ask an Expert: Is Any Travel Safe?