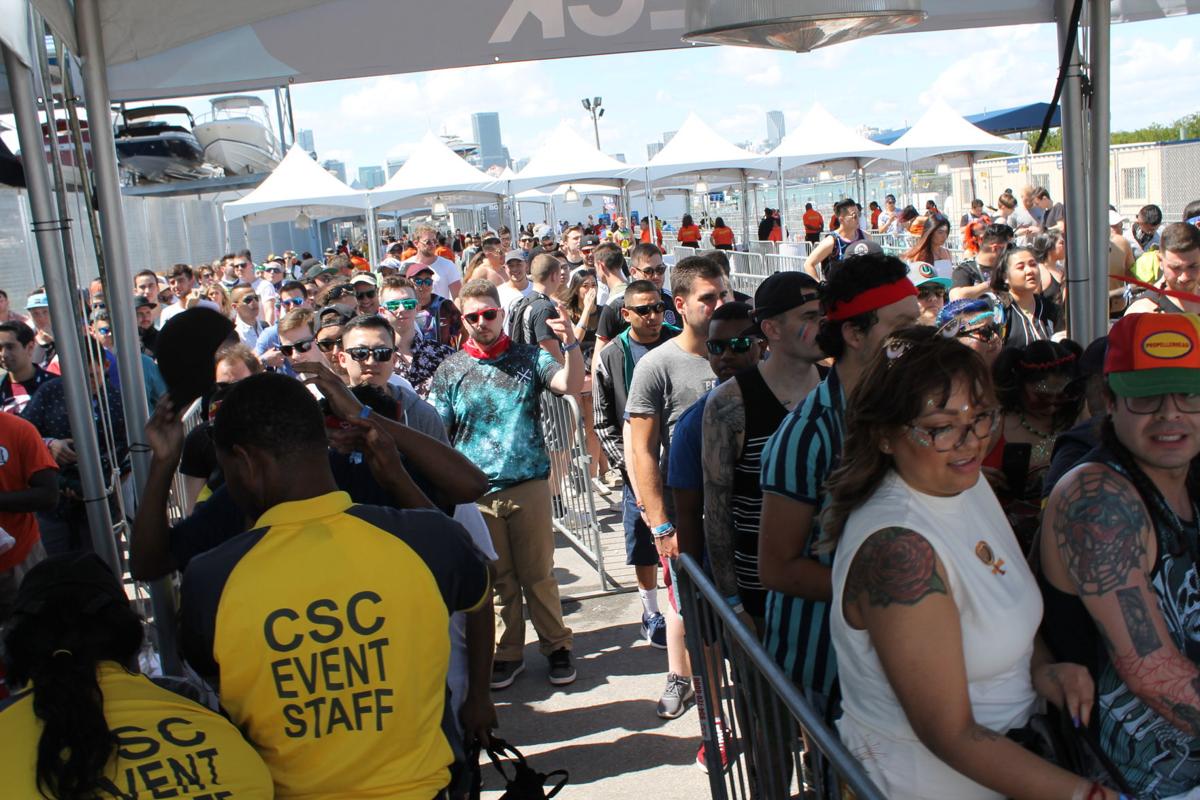 On the first day of the Ultra Electronic Music Festival on Virginia Key March 29, a steady stream of attendees disembark from their water taxi rides over to security for a body search before entering the site. 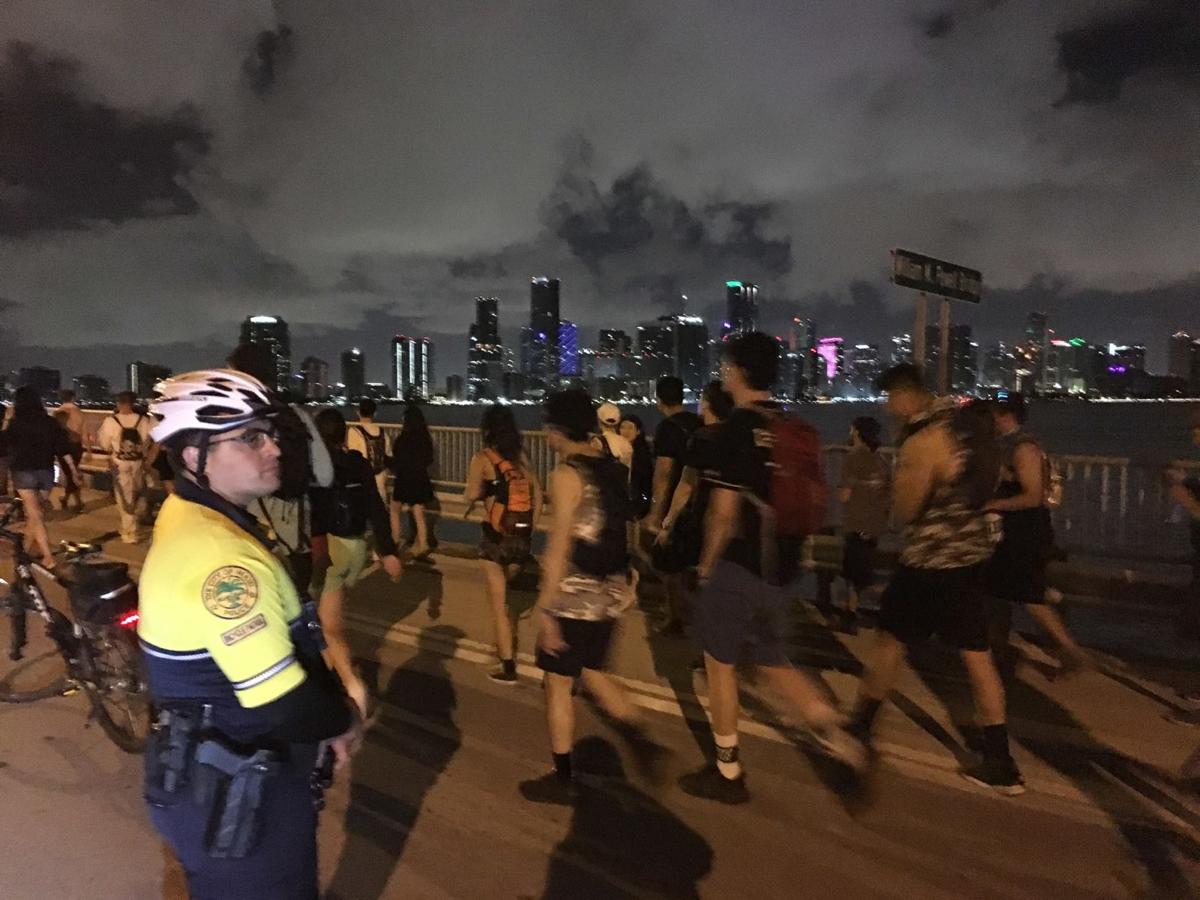 On the second festival night, the William Powell Bridge causeway exodus was more orderly with police officers stationed approximately every 100 yards. The northbound lanes were now completely closed to vehicular traffic for the thousands of walkers opting out of waiting for bus rides.

On the first day of the Ultra Electronic Music Festival on Virginia Key March 29, a steady stream of attendees disembark from their water taxi rides over to security for a body search before entering the site.

On the second festival night, the William Powell Bridge causeway exodus was more orderly with police officers stationed approximately every 100 yards. The northbound lanes were now completely closed to vehicular traffic for the thousands of walkers opting out of waiting for bus rides.

Of the two undecided voters, Commissioner Reyes says give them another try and Gort unresponsive

When the city of Miami Commission met on April 11 to discuss the renewal of the Ultra Electronic Music Festival license agreement on Virginia Key, Commissioners Joe Carollo and Ken Russell said they were against it. They cited a failed transportation plan that led to thousands of attendees overwhelming the Rickenbacker Causeway on foot all three nights of the festival close, city-wide noise complaints due to the thumping bass sounds, risky potential environmental consequences, and precarious public safety assurances.

Commissioner Keon Hardomon was enthusiastically ready to renew the contract right there and then, calling it the new Studio 54 style American gathering. Commissioners Manolo Reyes and Willy Gort appeared undecided after listening to over a dozen speakers against it and two in favor. Although he does not vote, city of Miami Mayor Francis Suarez has been an enthusiastic supporter all along.

On May 9 the city is set to re-visit the discussion, and although, per the city attorney, they have until May 27 to officially decide whether or not to renew Ultra’s revocable contract for another year at Virginia Key; they will likely decide Thursday.

Based on the following Islander News interview with Commissioner Reyes, the declines from Commissioner Gort and his office staff to address reporter questions from Key Biscayne, the city manager’s advance memo assuming Ultra’s return to Virginia Key before the commissioners took up the discussion item, and the multi-millions of dollars at stake; it looks like a sure-thing for Ultra fans to go ahead and buy those tickets now advertised online for the posted 2020 dates on the barrier island.

“I don’t beat around the bushes,” said Reyes in a recent telephone interview.

“I am very straight forward. I told your neighbors and mayor and others, I told them I am in favor of giving them another shot. I want to give them a shot and see if the problems they created could be solved or minimized. You have to understand the city of Miami are receiving funds that are very much needed.”

When the suggestion made by County Commissioner Xavier Suarez was mentioned, that the city is not quite as desperate for revenue as it was back in the day that it’s necessary to risk managing 150,000 people over a weekend at a venue with one way in and out in an environmentally sensitive area like the Bill Sadowski Critical Wildlife Water Basin, Reyes said, “he should come and look at our budget and now that we have unforeseen expenses like the numerous lawsuits that we have.”

One of those was launched by attorney David Winker on behalf of the Brickell Homeowner’s Association based on what they believe is an agreement that violates city laws in how the Ultra contract was arranged without a request for proposal process that they say is in fact a lease and not a license.

According to President of the Brickell Homeowners Association board of directors Ernesto Cuesta, the association has decided to “not waste any further time on the lawsuit” after Judge Rodolfo Ruiz ruled against the emergency injunction preceding the concert.

“The decision was made not to appeal,” said Cuesta. “We are waiting for the decision of the commissioners (May 9). From there we are going to convince the voters to go to the polls to make sure that the commissioners that voted (to renew the Ultra contract for 2020) are not re-elected.”

Reyes said the revocable agreement to Ultra was for two years and he wants to see it through.

“We voted to grant them a license for two years,” said Reyes. “It is a revocable license and in two years we can revoke it or not but since we spoke about two years I want to give them a shot and see if the problems they created could be solved or minimized.”

Reyes said he is trusting what “the experts” say that the festival can be managed and he said he talked to “everybody.” When asked who those experts were and if they included Ultra folks, he mentioned the police chief, fire chief, and city manager and that he had not spoken with “Ultra folks.”

Upon further questioning that referenced: the police chief’s admission in an interview with Islander News that “any way you slice it, it’s 50,000 people on the key” each day for three days and thus inherently dangerous; that the assistant fire chief admitted in the April 11 discussion review meeting their resources were strained in dealing with Ultra; and that the city manager assumed it was coming back to Virginia Key in a report before the problems were reviewed and environmental data on effects analyzed; he did not directly respond.

Balance of commentary from the Q & A between Islander News and City of Miami Commissioner Manolo Reyes:

IN: How do you respond to the preliminary scientific evaluations reported in the Miami Herald by Joey Fletchas (from a Virginia Key Advisory Board meeting presentation) that the Rosenstiel School fish hatcheries on Virginia Key were detrimentally affected by Ultra?

I want to be convinced and I want to see proof and that analysis of those saying the same. I can tell you the sky is not blue….but being my discipline requires me to prove many experiments to prove any hypothesis. I haven’t heard of any scientific proof of that….and that it has a long lasting effect on the fish…it could be only temporary.

IN: How do you respond to Village Council Member Ignacio Segurola’s contention (at the April 11 city meeting citizen comment) that renewing Ultra for next year would be like flirting with disaster in terms of public safety considering over 200 (281) emergencies were reported from the fire department?

IN: How do you respond to Council Member Katie Petros’ concern (April 11 citizen comment remarks) that allowing Ultra to return is going to possibly lead the way to more and more of these Ultra-sized concerts and with greater frequency?

MR: We have a venue there that is Virginia Key. I don’t think we are going to have (another) event that is going to bring so many people either. Yes there are going to be events there, it is a source for the city.

We want to work together with Key Biscayne and county, and parks, and transportation…that we can go into Virginia Key without having so many inconveniences. I don’t believe we should close Virginia Key when we as the city of Miami we need the revenues.

I am willing to work with the government of Key Biscayne and I have met with the mayor and been very honest with him and we have to find common ground.

You know that traffic out of Key Biscayne it doesn’t take Ultra to have a jam…any Sunday if you leave Crandon at 5 o’clock and it takes 45 minutes to get to Miami.

IN: How do you respond to the numerous city of Miami resident complaints of thumping bass preventing area residents and working people around Brickell from sleeping that were read aloud by Commissioner Carollo in the last meeting, the reported sirens wailing all night (Brickell Townhouse resident complaint reported in Islander News and possible building damage post Ultra on property), even the city of Miami mayor said it was too many people per day on the site…

MR: That is another concern that I have, the resident’s complaints…that the boom, boom, boom, is unbearable and if they can eliminate that or reduce the bass, particularly the bass I will see if it works.

(As far as the wailing sirens all night) I believe (the 281 reported emergency medical treatment responses) they were treated on site.

I do have concerns on all of that, I do have questions and this is how I feel…and that’s, it doesn’t mean I don’t have any regards for people on Brickell or Biscayne Boulevard, and on the key…based on what I’m hearing and the assertion it can be improved, I am leaning on giving them another shot.