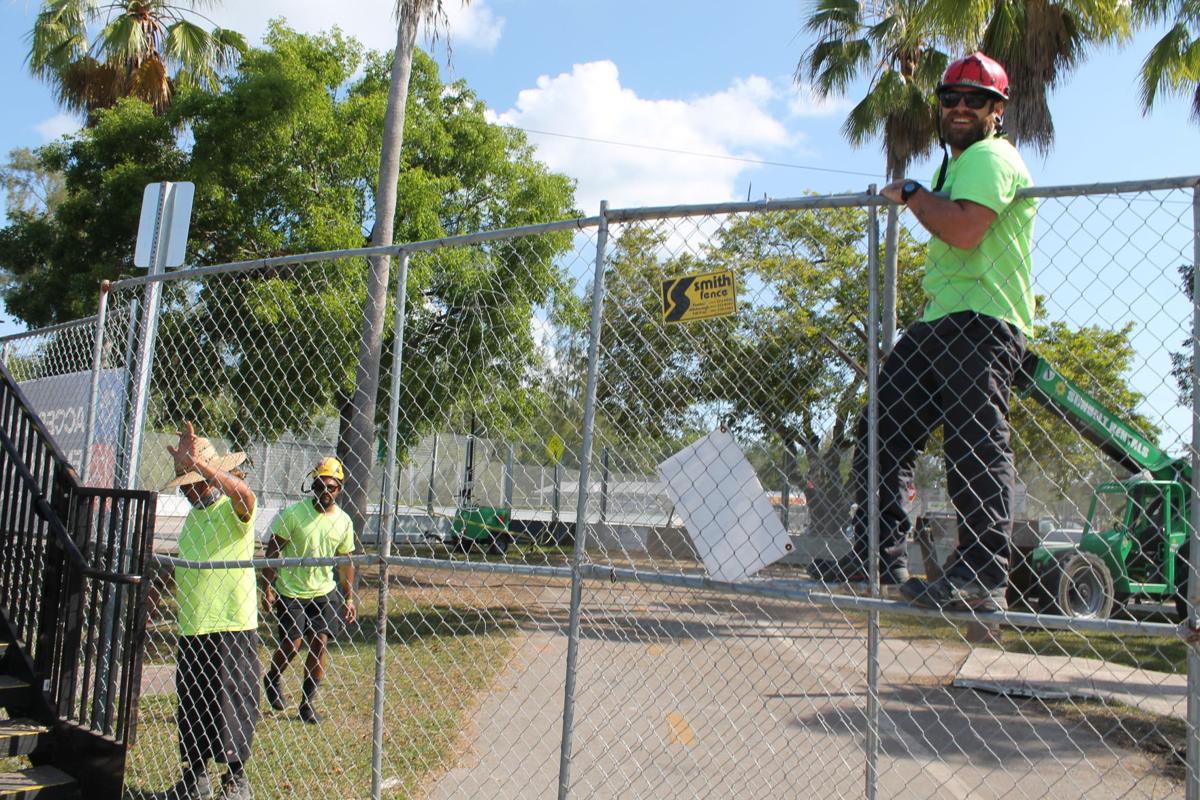 Dane Decaiare (far right) from James Thomas Productions begin to strike. He estimates the stage will be down by the end of the weekend. 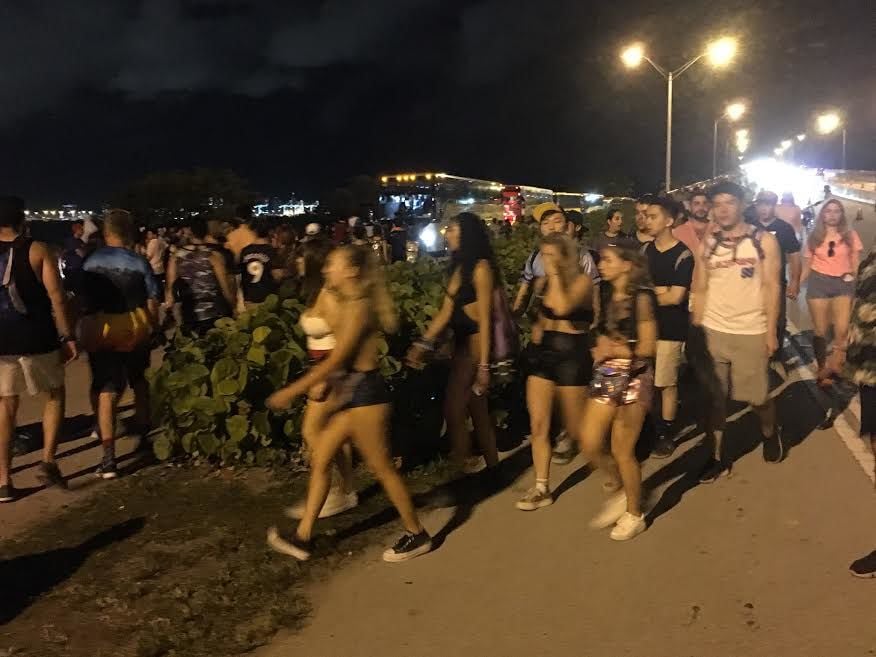 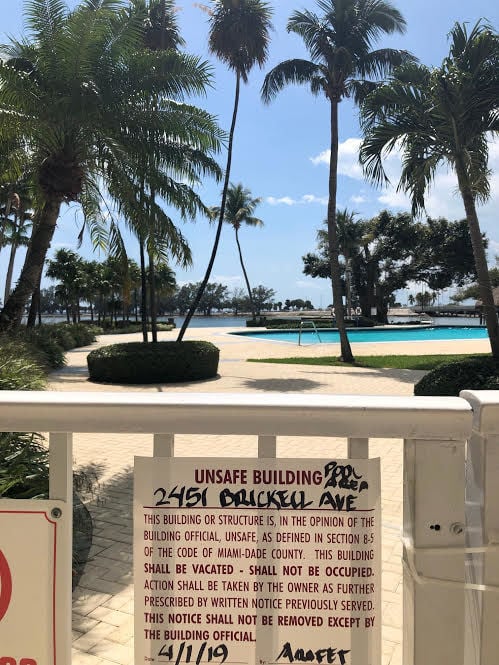 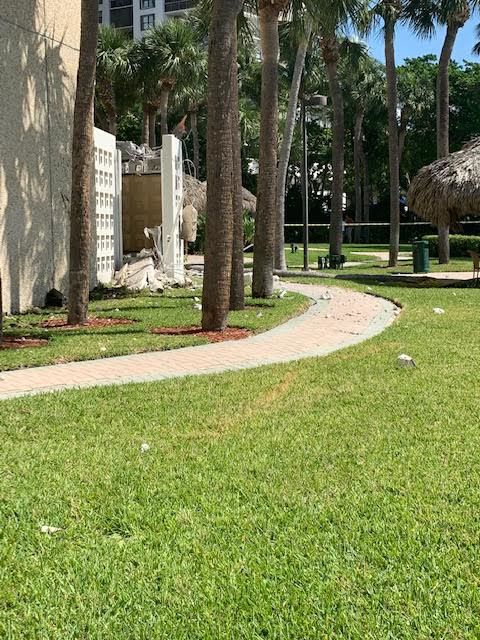 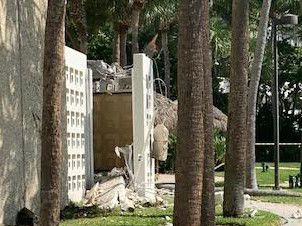 Dane Decaiare (far right) from James Thomas Productions begin to strike. He estimates the stage will be down by the end of the weekend.

Key Biscayne was a reported ghost town with many businesses and islanders gone or hunkered down over Ultra weekend. The tricky transportation post event departure was mollified from the Friday night chaos but still questionably efficient by Sunday night. Brickell residents were affected in varying degrees and total City of Miami Police arrests were 35.

Day three of Ultra was the most expeditious post party mass island exodus of the three day event according to an on-site staff source who said that the last bus departed at 4am. The causeway was still overwhelmed with what appeared to be thousands of walkers hoofing it to the mainland in the wee hours as was the case at the end of each Ultra night.

The ultimate determination of whether Ultra will stay on Virginia Key or move to a perhaps more practical off-urban-core location may come from the attendees themselves.

Twitter was exploding with comments of disgruntled fans all weekend long who were frustrated with the bus boarding delays and faulty transportation plan. Some snarky comments included suggestions that Billy McFarland, promoter of “Fyre Festival” infamy was in charge, and references to the “Ultra 5K Run and Walk.”

There were also blissfully happy party goers quoted on local television who had a splendid time and were empathetic with the first year transportation kinks.

Rosa Legcevic lives on the 17th floor of Brickell Harbor on 15th Road and said the noise was no big deal.

“I thought it was going to be worse,” said Legcevic.

“You could hear the thump but not much from inside although I do have hurricane impact windows. It wasn’t as bad as when the Four Seasons Hotel across the street throws a big party.”

Lina Mesa who resides at Brickell Bay Club Condominiums just off the causeway said although her family works as food vendors for Ultra, she would rather see it back at Bayfront.

“When I woke up on Saturday morning to walk my dog I was wondering why there was trash everywhere….mostly plastic water bottles. In front of our building is the first bus stop and then I realized where it came from but other than that we weren’t really affected,” said Mesa.

“We could see it from our balcony on the 22nd floor and hear it from upstairs outside but not really on the ground level. Full disclosure I am very pro-Ultra because my family works with them. It’s a great event but all of those people leaving on the causeway at night is dangerous. It belongs back at Bayfront near hotels and by the Metrorail.”

Tere Sosa who lives next door to Mesa at Brickell Townhouse, and is directly across the bay from Virginia Key on the third floor had an if-you-can’t-beat-them-join-them attitude.

“We sat down by the pool and we took prosecco and cheese and it wasn’t as horrible as people say. We couldn’t hear the music, the only thing we could here was the boom-boom-boom,” said Sosa.

According to her building security staff, that boom-boom-boom caused an exterior building tile panel to fall away.

“The vibration loosened up a part of the wall in the building…in the apartment building. Today the security staff told me that on one side of the building, a wall panel, a big tile six foot piece had fallen off and they said it must have been from the boom-boom-boom,” said Sosa.

Editor’s Note: One of the managers of Brickell Townhouse who spoke to Islander News said he could not confirm or deny the source of the broken tiles but it was discovered Monday morning. Over 15 residents complained, many of whom believed it was caused by the concert. The building was built in 1963. The City of Miami inspectors and Fire Marshal have been out to the property and engineers are investigating the damage.

Sosa said for her it was all about the sirens not the bass. “What bothered me the most was the sirens all through the night because that was very loud…you could hear the police, the fire…it was all night long and that did wake me up because I am very close to the bridge.”

Sosa was a fifteen year resident of Key Biscayne who left two years ago to be closer to her daughter and grandkids in the Roads, enjoy improved amenities in her new building, and also because of the increased traffic on the key.

Both County Commissioner Xavier Suarez and City of Miami Mayor Francis Suarez complained about the noise levels and said they were subsequently reduced over the course of the weekend.

“I really want to find another venue this is just not the right place,” Commissioner Suarez told Islander News on Monday.

The Miami Dade County Police Department spokesperson Carlos Rosario said there were two arrests, one for narcotics and one for resisting arrest without violence.

6 for operating business w/o license

3 for poss w/ intent to sell

6 for operating business w/o license

1 for poss w/intent to sell

2 for disorderly / 1 for trespassing

4 for poss w/intent to sell