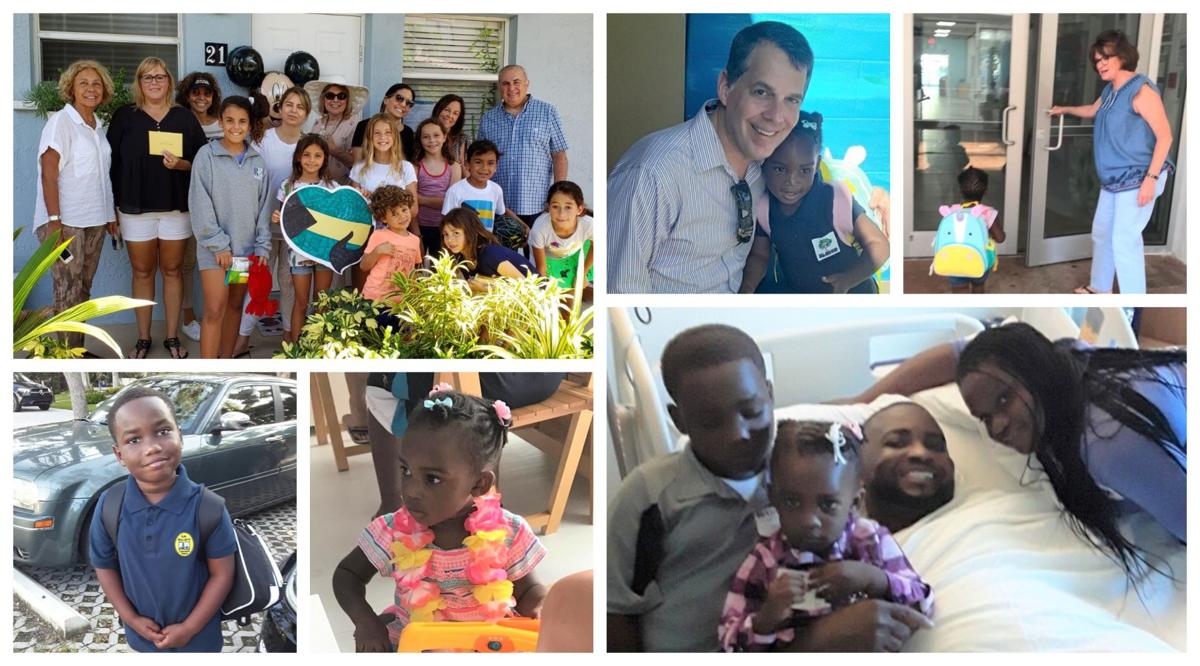 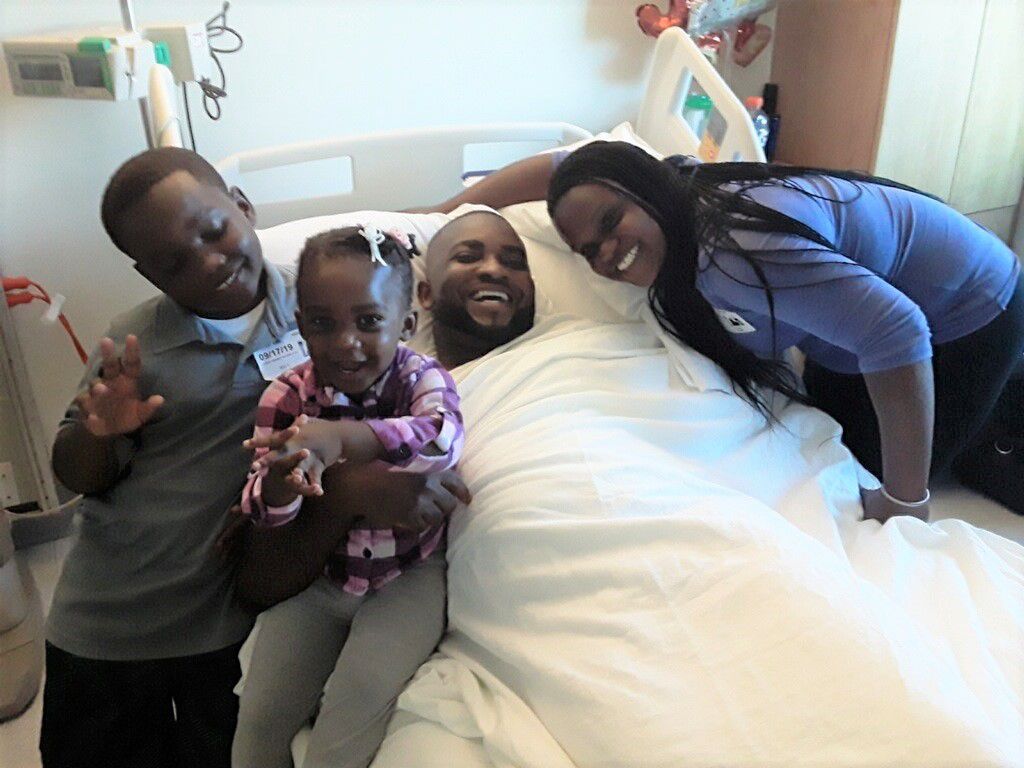 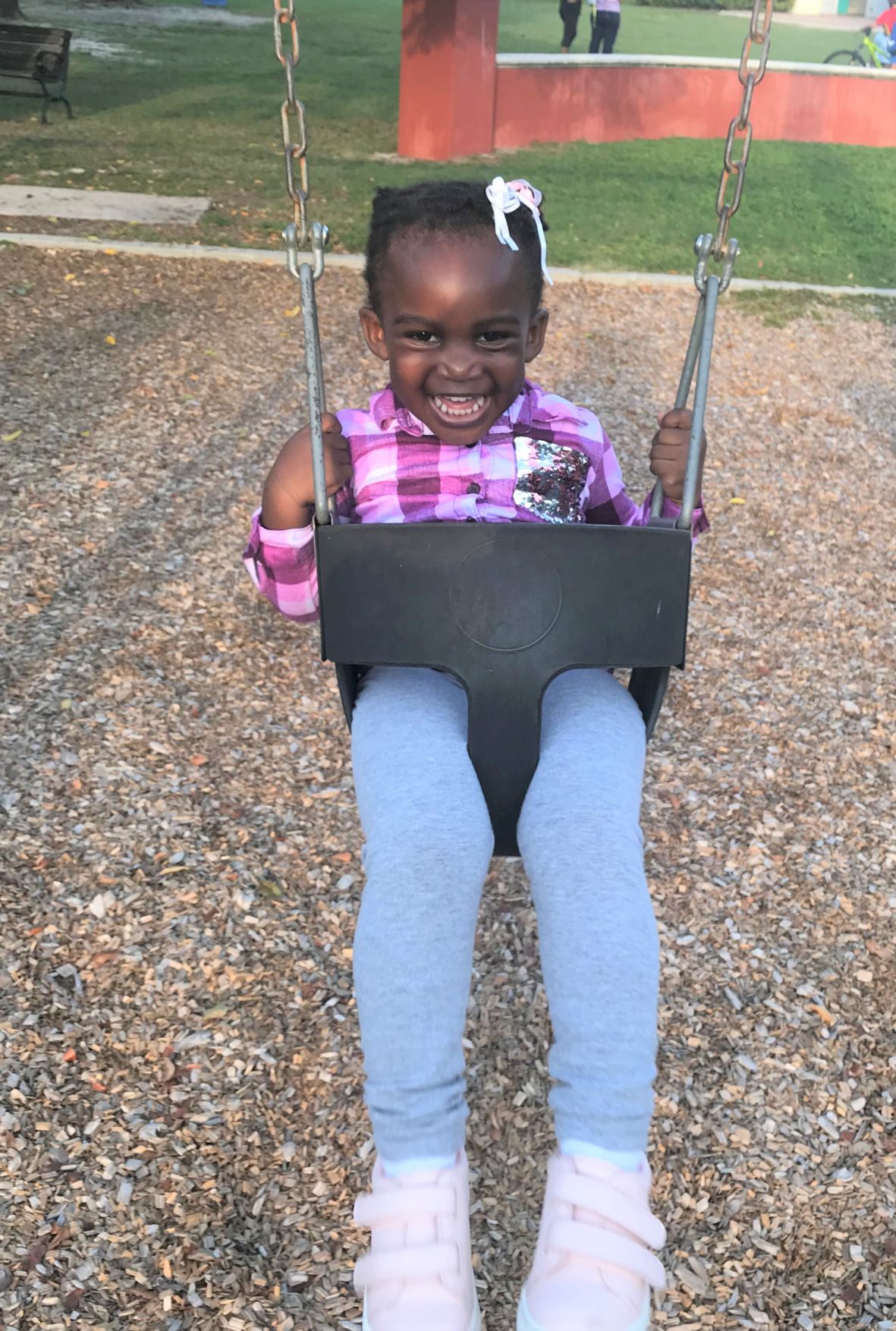 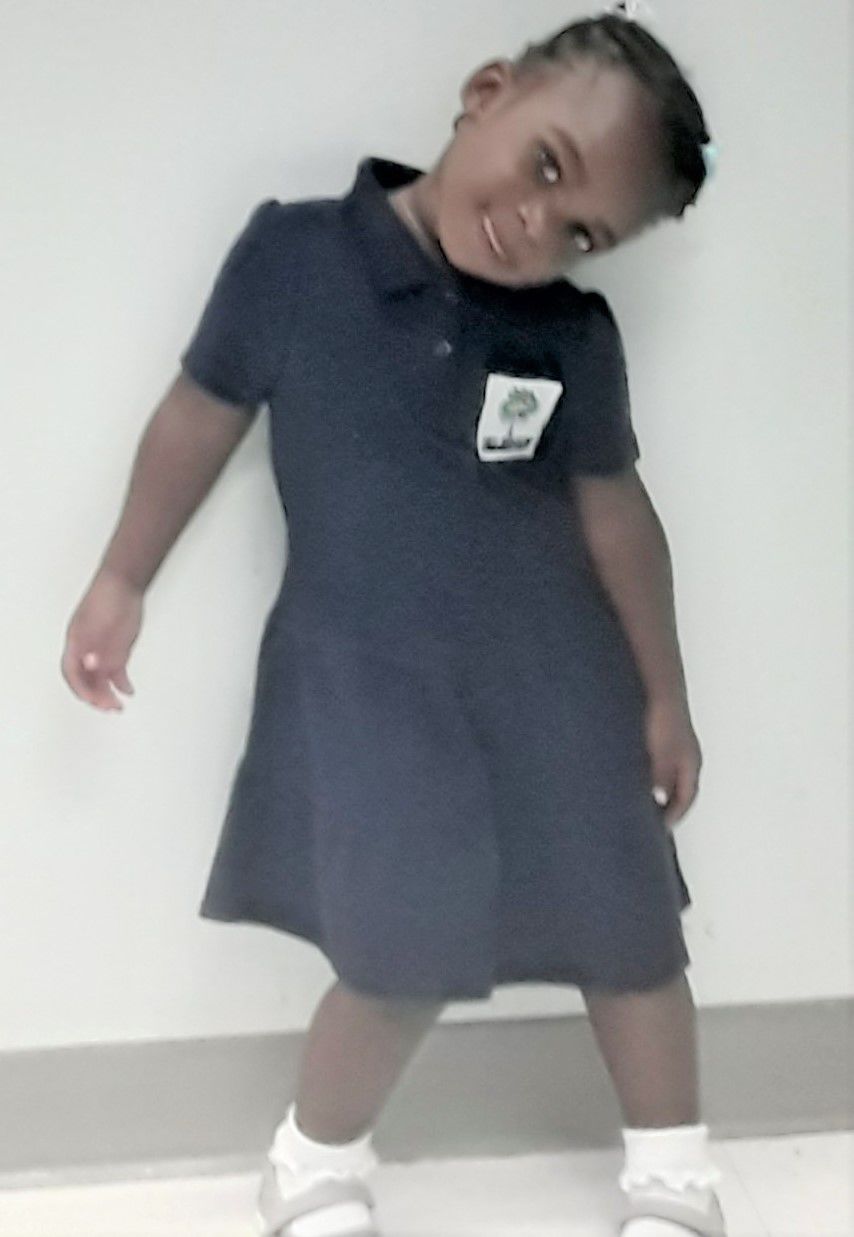 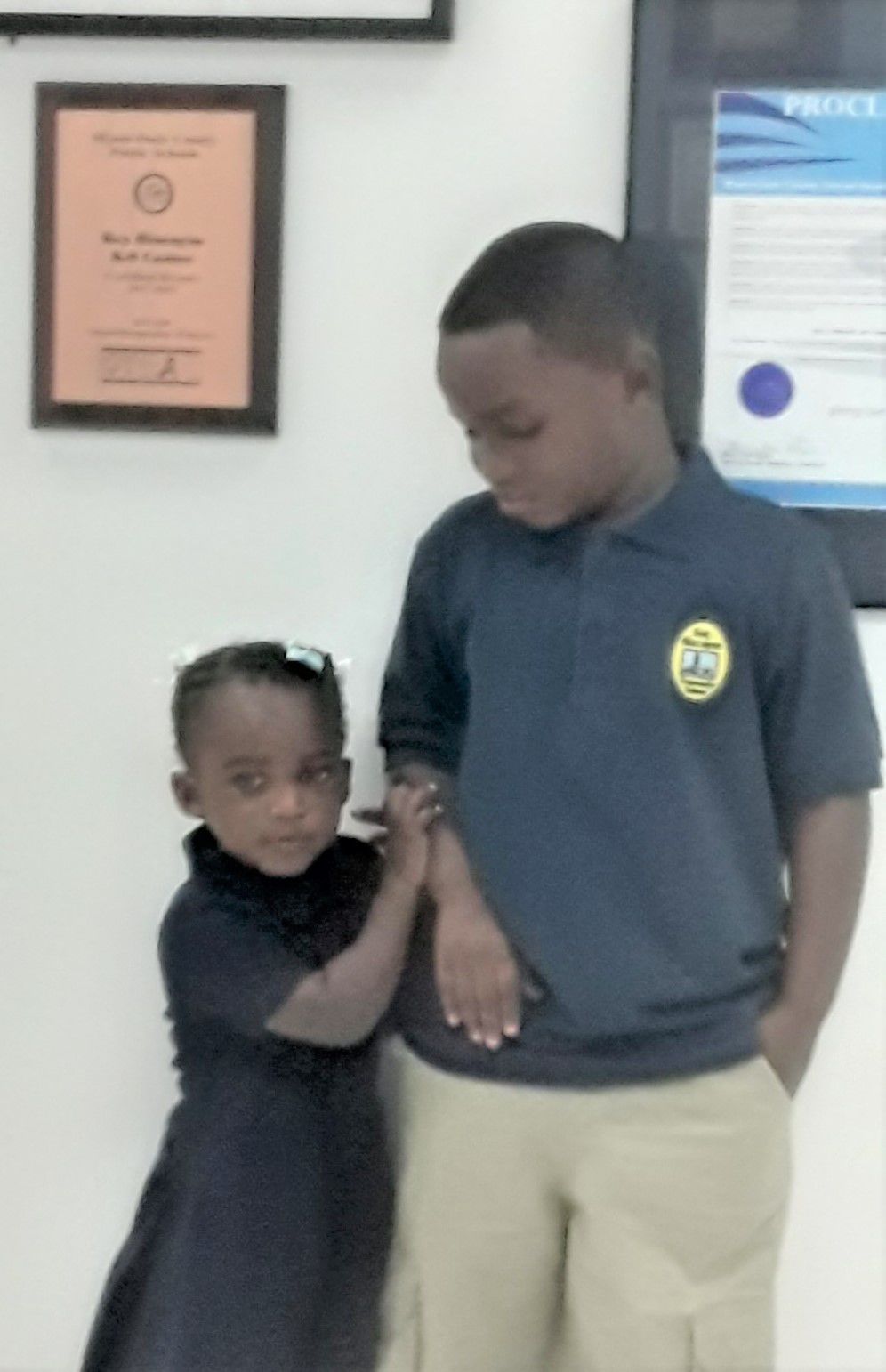 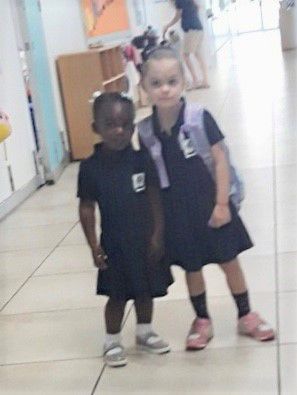 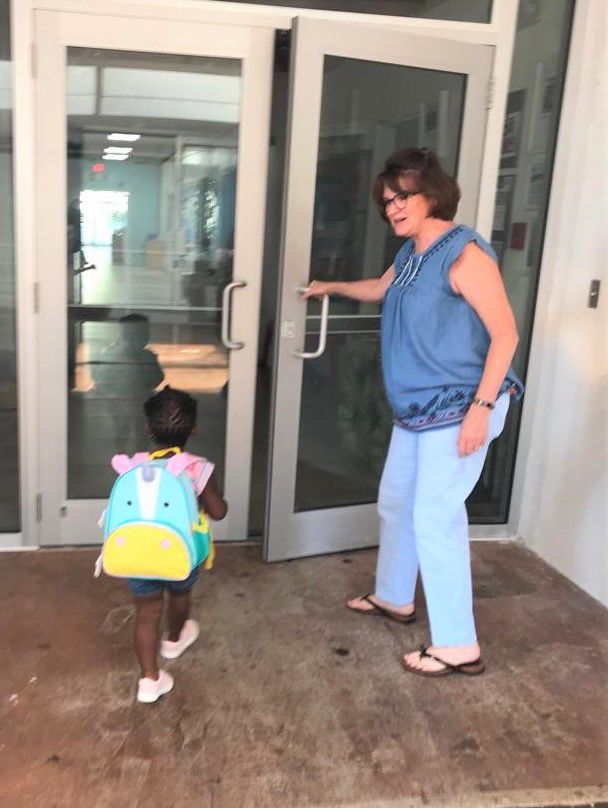 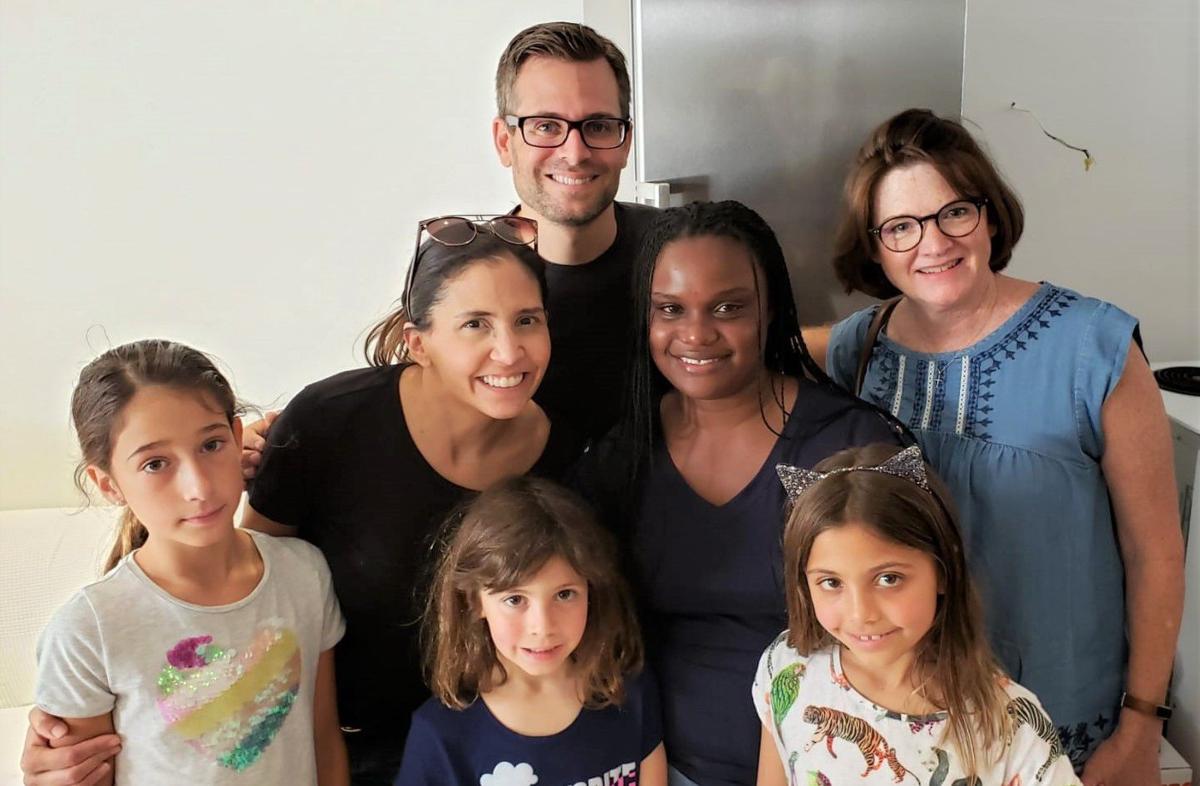 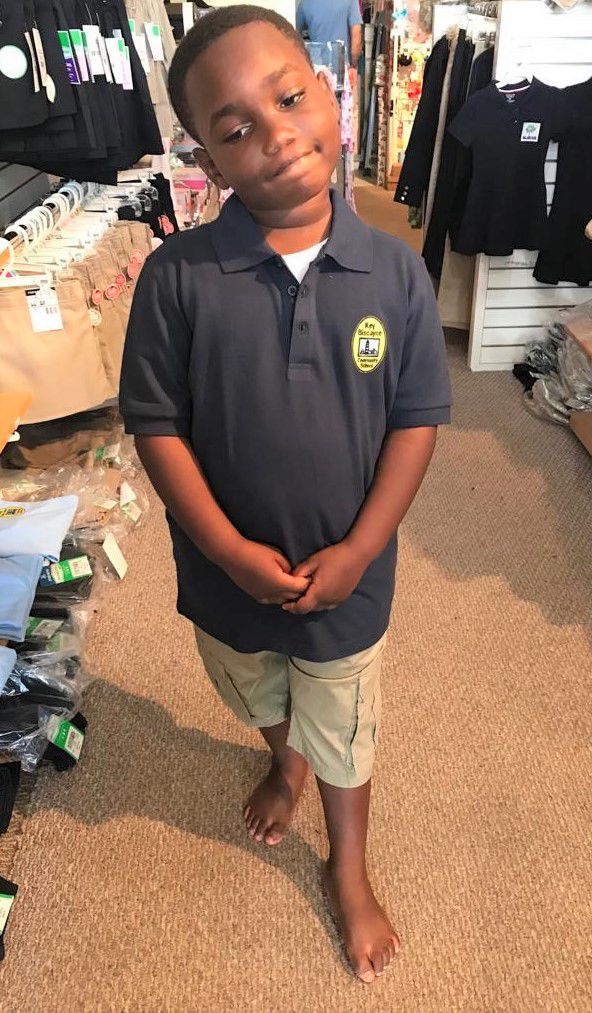 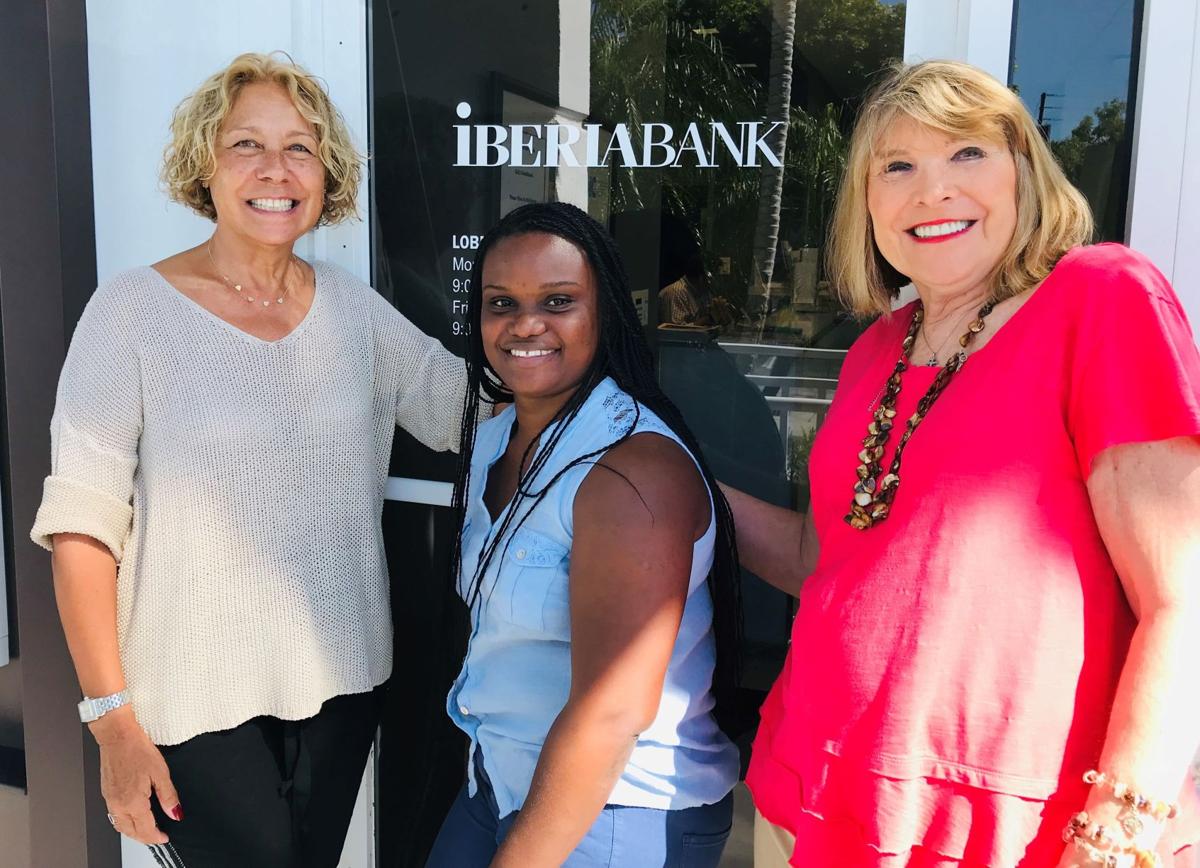 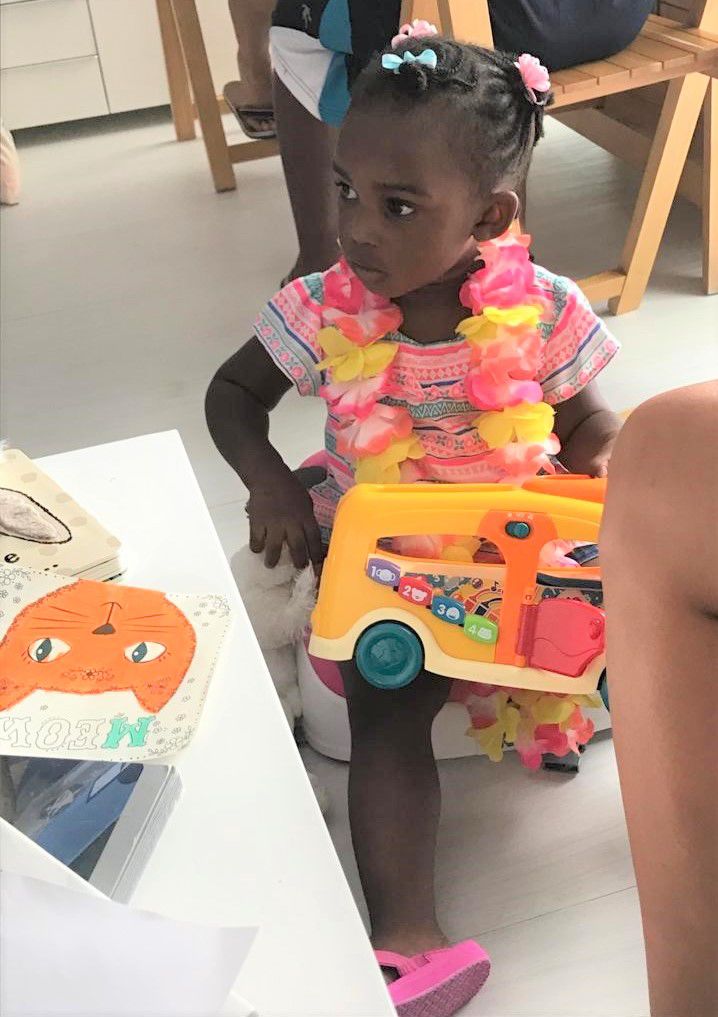 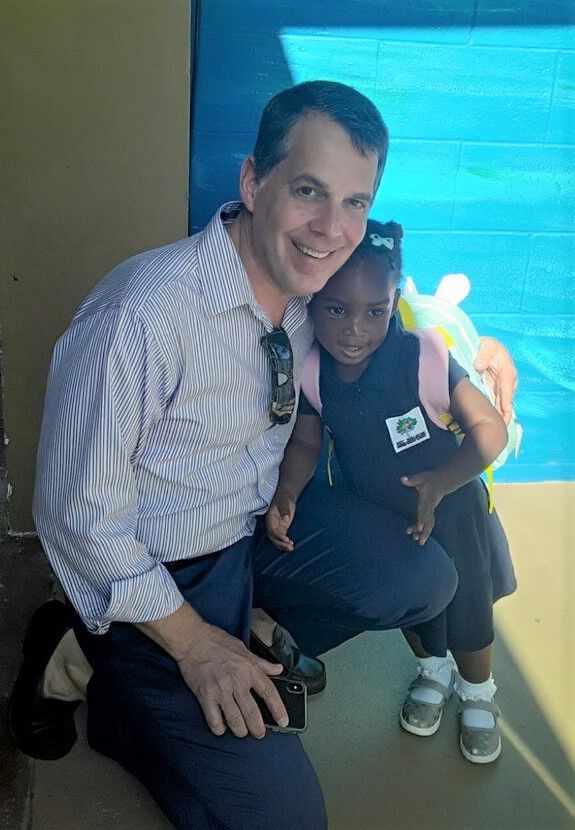 Juan C. Gutierrez Direcot of HR at Village of Key biscayne with Chloe on her first day of school  (2).jpg 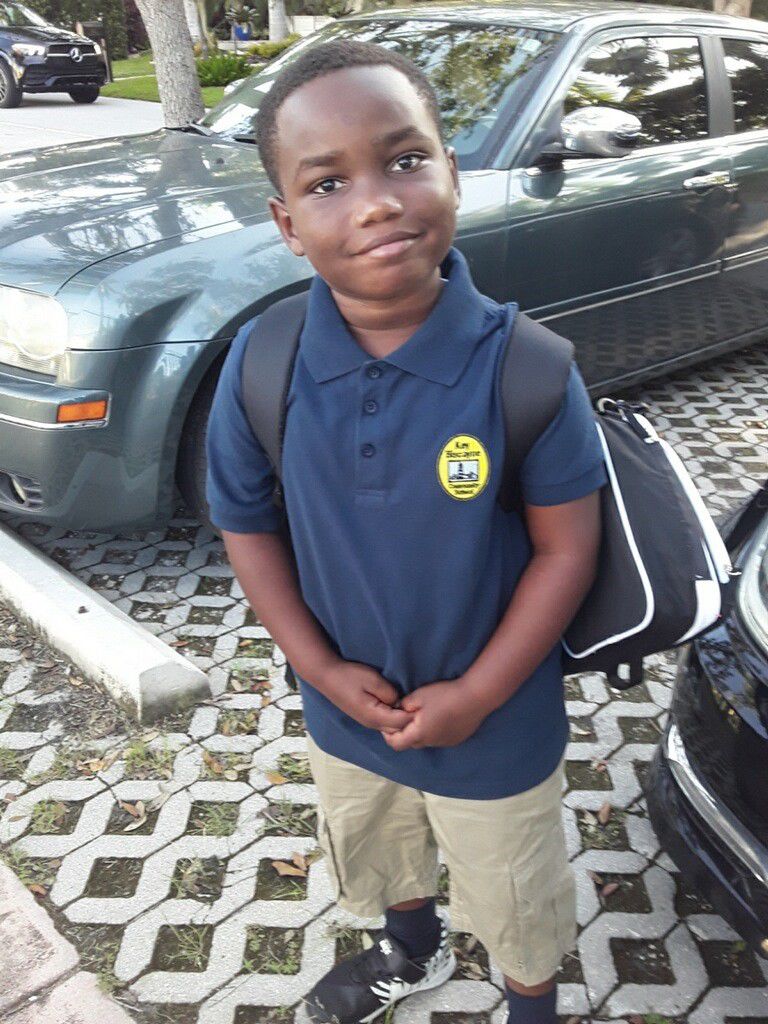 Erynn ready for his first day of school at KB-K8 Center on Monday, September 15 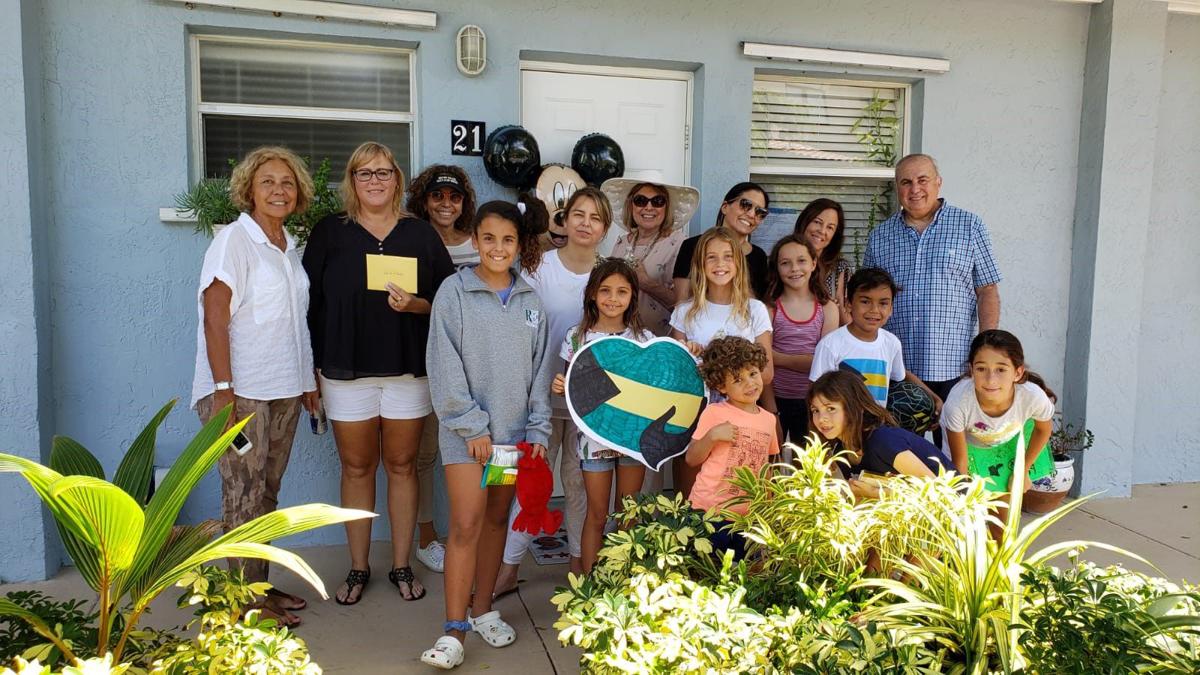 Residents gather to welcome Elsie, Erynn and Chloe to their new home, provided by Michele Estevez, on Sunday, September 14

“When I see the love (Key Biscayne) showed them, I couldn’t stop crying. There are no tears of sadness, but tears of joy. They don’t even know us to show us that love; it means a lot to me.”

After losing his left arm, his mother and his home to Hurricane Dorian, Erick Auguste is finding refuge within the community of Key Biscayne, roughly 190 miles from his home in the Bahamas.

And he sees his story as one of hope.

It has only been two weeks since the devastation, and as the Auguste family settle into a life that includes a long-term hospital stay, new schools, and as of Friday, a new-to-them home, they are grateful.

“It’s like you’re in the desert, and someone gives you a glass of water,” Erick Auguste said of the support his family has embraced, and while he receives continued care at Jackson Memorial Hospital in Miami. “When people show you love, it gives you energy.”

While he receives medical treatment, the rest of the Auguste family – wife, Elsie, and their children: son Erynn, 8; and daughter Chloe, 2 – live in the home of Michele Estevez, who was forwarded a story from the Palm Beach Post about Erick Auguste and his family’s plight. She knew she couldn’t resist helping.

“All I ask is to not thank me,” she said. “After you read that story, you can’t leave them. It’s not about me giving them the house; it’s about them and the community. I don’t want recognition. I want to give them the best home we can in the community."

“All I did was open the door.”

The most urgent crisis left by the Category 5 hurricane, which battered the northwestern Bahamas for 40 hours and killed at least 50 people, is over, according to an article in The Washington Post. The Bahamian National Emergency Management Agency reported Sept. 11 that 2,500 remain missing.

Many residents left Grand Bahama, where flooding and wind damage was widespread, according to news reports. Nearly everyone has been evacuated from Great Abaco, where most structures were obliterated, and where the Auguste home once stood in Treasure Cay.

Loss, and fitting in

Auguste lost his mother, Matinise Elysee, to Hurricane Dorian. In his interview with the Palm Beach Post, Auguste said he was holding his mother in the wind-swept waters when a sheet of plywood sliced off his arm, and she floated away with his severed arm.

Asked to describe her, Auguste, a barber and an electrician, immediately breathed two words: “the love.”

“She loved the entire community,” he said. “Wherever she goes. She gave to the less fortunate. She had a strong energy. Living with her, it’s like breathtaking. Every day … she had so much energy. She loved to play games with the kids, especially my son Erin. My mom, the last game they played together, he won, and she wouldn’t let him sleep until she beat him back.”

His children have been at the center of his mind – how they’re adjusting, how they’re fitting in. What kind of support they’re receiving. And whether they’ll be comfortable in Key Biscayne.

“Chloe was my biggest concern,” said Auguste. “Erynn, he can fit into any environment. He’s flexible like that. My baby girl is shy, and to see (a video of) her playing with all the kids, brings tears to my eyes.”

“Everyone is warm and welcoming,” Elsie Bain-Auguste said. Monday “was their first day at school. Erin adjusted pretty well. I thought by him seeing everything that has happened … to my surprise, he talks about it. It doesn’t affect him."

“Chloe is just jolly and happy. The blessing of being 2 years old.”

“There’s no way you can leave people in this tragedy,” Estevez said. “The community … overwhelmed with the community’s support. And somebody on the island … they have committed to do the prosthesis for him.”

But there continue to be everyday needs.

The family could use a laptop and a printer. And 2-year-old Chloe could use size 5 or size 6 diapers.

“They do have plenty of clothes,” Estevez said. “But maybe Winn Dixie gift cards. And Erin is very mature for his age, so maybe if any kids are 12 or 13 or 14 years old, they might want to come and take him to the park. He loves soccer, baseball, basketball. That would be a great help.”

Much of the help for the family has come through the Key Biscayne Community Foundation’s KB for Bahamas committee, which Estevez is a part of. Other members include: Maria Claudia Davey, Carolyn Koslen, Anne Rothe, George Mendia and Silvia Tarafa.

“We reached out to our committee, and they either themselves donated something or had their own connection to help reach that need,” said Melissa White, Key Biscayne Community Foundation executive director. “Some donated Winn Dixie cards, uniforms for the children. Housing, food and school is a lot. The schools took the children with open arms.”

But before KB for Bahamas stepped up, Juan C. Gutierrez did.

The director of human resources for Village of Key Biscayne had connections with Erick Auguste’s brother, Johnny, and offered help before the storm hit.

“I told them that if they needed anything, to let me know,” he said.

When Erick Auguste was transported to the Miami hospital, Elsie and her children needed a place to stay, and Gutierrez offered a bedroom in his house for a few days. Then they learned Estevez’s house was available for them.

“I had not met Erick before,” said Gutierrez. “I have known the family for about 15 years … my connection was with Erick’s brother"

“I was interested in helping out the people of Treasure Cay specifically. They are wonderful people, and I guess this is my way of helping. We’re not letting go. We’re still going to be involved with them whether they like it or not.”

Beyond the immediate concerns, Elsie Bain-Auguste said she is “holding in there.”

“I have to be the support right now,” she said, adding the family does not know how long Auguste will be in the hospital. “There’s a lot of healing that needs to take place.”

“The community, the town, it looks so peaceful and lovely,” Erick Auguste said, explaining that his wife takes videos for him. “It makes me cry.”

Only two weeks since the hurricane, Auguste said his mind jumps from one thing to the next.

“I have no feeling,” he said. “My mom passed. We prayed together. Knowing I will never have that again, it’s terrifying. Honestly, sometimes I feel like giving up, but my family is my strength right now. And the support I get from friends and family keeps me strong. I can’t let them down.”

A Seventh-day Adventist, Auguste said he is an elder in his church, and credits faith and God for getting his family through the storm.

“Today, God is good,” he said. “It is better than yesterday. We ask that the churches and the community, pray for us. We are prayer warriors. We strongly need them. We prayed before everything started. And when the winds carried me away from my family, I still prayed. It’s just amazing I’m alive, but I’m alive for a purpose".

“People need to hear the story. Some people get discouraged and give up on life, and see me, and know that there is hope. Yes, there is a message of hope in my story.”

Today, the Auguste family doesn’t focus on the storm, the losses, or the heartache. They focus instead on the community that has enveloped them.

“Such a warm welcome,” Auguste said of Key Biscayne. “My wife broke down in tears. When I see the love they showed them, I couldn’t stop crying. There are no tears of sadness, but tears of joy. They don’t even know us to show us that love; it means a lot to me.”

From beginning to end, Estevez said, the family has endured much.

“When you read that this happened to one family, you might only see this in a movie,” she said. “It just struck me, everything. Imagine your own mother taken away from your own arm that you just lost. And your sister, wondering ‘Do I go to my brother, or hang on to my nephew?’

“It was too much. I couldn’t resist (helping). Why not? I hope that somebody can do the same thing to me. Do unto others as you want done unto you. Just the thought that could have been us. We were very lucky.”