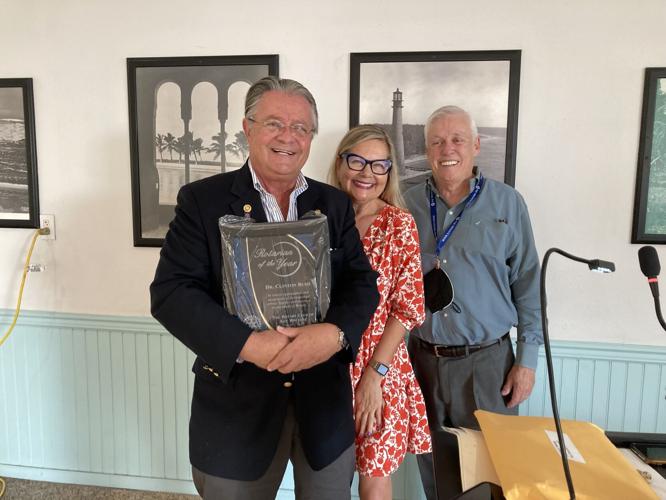 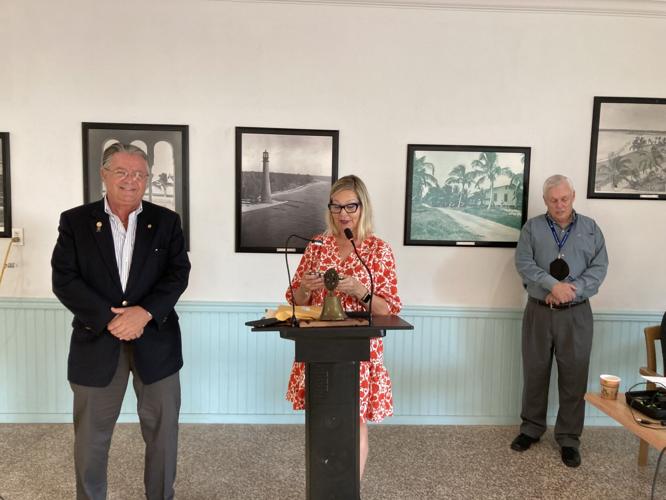 On Friday December 10th the Rotary Club of Key Biscayne named the 2021 Rotarian of the Year.

This honor is selected by previous recipients of the award. Patricia Amat y Leon, 2020 Rotarian of the Year, led the committee in the difficult task of selecting one member among so many hardworking, dedicated, and generous club members.

The Rotary Club of Key Biscayne, despite nearly two years of pandemic, has not stood still in its mission of Service Above Self to the community and humanity at large. Several local and international projects were launched in 2020-21 to address needs ranging from earthquake relief in Haiti to a school for children in Ghana to school supplies in Liberty City.

Patricia Amat y Leon shared that Dr. Clint Bush was selected unanimously due to his quiet and gentle leadership throughout the pandemic, his unwavering dedication to Rotary through his willingness to serve as Assistant District Governor and District 6990 chair of the Paul Harris Society in addition to his duties as a director of the Rotary Club of Key Biscayne Foundation. Past service to our club has been as President, Director and chair of countless committees. His focus on our club and Rotary in general has translated to successful projects throughout the years.

Dr. Clint Bush served as the club’s unofficial “medical director” by keeping members abreast of the myriad health issues caused by the pandemic. We navigated the crisis safely in great part due to his suggestions. But, his Columbia University College of Physicians and Surgeons medical degree in no way limited his passions. While serving for 31 years in Gainesville, Florida as an orthopedic surgeon and for the last 9 years in private practice locally, he sang, volunteered at his local church, sailed and generally enjoyed life to the fullest! Clint has two sons, twins, one living in Gainesville and one in South Lake Tahoe.

Clint joined the Rotary Club of Key Biscayne in 2013 sponsored by Reverend Bob Libby. Clint had returned to Key Biscayne after a 7-year 50,000-mile circumnavigation of the globe aboard the sailboat Emmanuel with his late wife, Dr. Adair Alspach Bush.

Wanting to stay on terra firma, he joined St. Christopher’s-by-the-Sea and quickly rose in that church by singing in the choir and currently serving as Sr. Warden. Reverend Bob Libby and Clint became fast friends.

Reverend Bob saw that Clint was a Rotarian who didn’t know he was a Rotarian. He encouraged Clint to try it out, and the rest is history.

“Clint has been an exemplary Rotarian” said Club President Michael Nearing at the award ceremony on Friday. He shared that Clint is a willing volunteer for various projects and consistently shows balanced leadership in all he does for the club.

While his dedication to Rotary is significant, this busy orthopedic surgeon finds the time to indulge his passion for singing in many ways. He sings in the St. Christopher’s-by-the-Sea choir, participates with the Master Chorale of South Florida and, is one of the Rotary Three Tenors! He also serves in a leadership position in Cruising Club of America now that he replaced his beloved Emmanuel, destroyed by hurricane Irma, with a 35-year-old 33-foot sloop, Imagine.

Dr. Clint’s choice of name for both vessel reveals his deep spirituality and his outlook on life. Clint is truly a “Renaissance Man” for whom life is a continuing and fulfilling adventure.

What was making news on the island in 2005

I had a touch-and-go experience with COVID, says Shania Twain