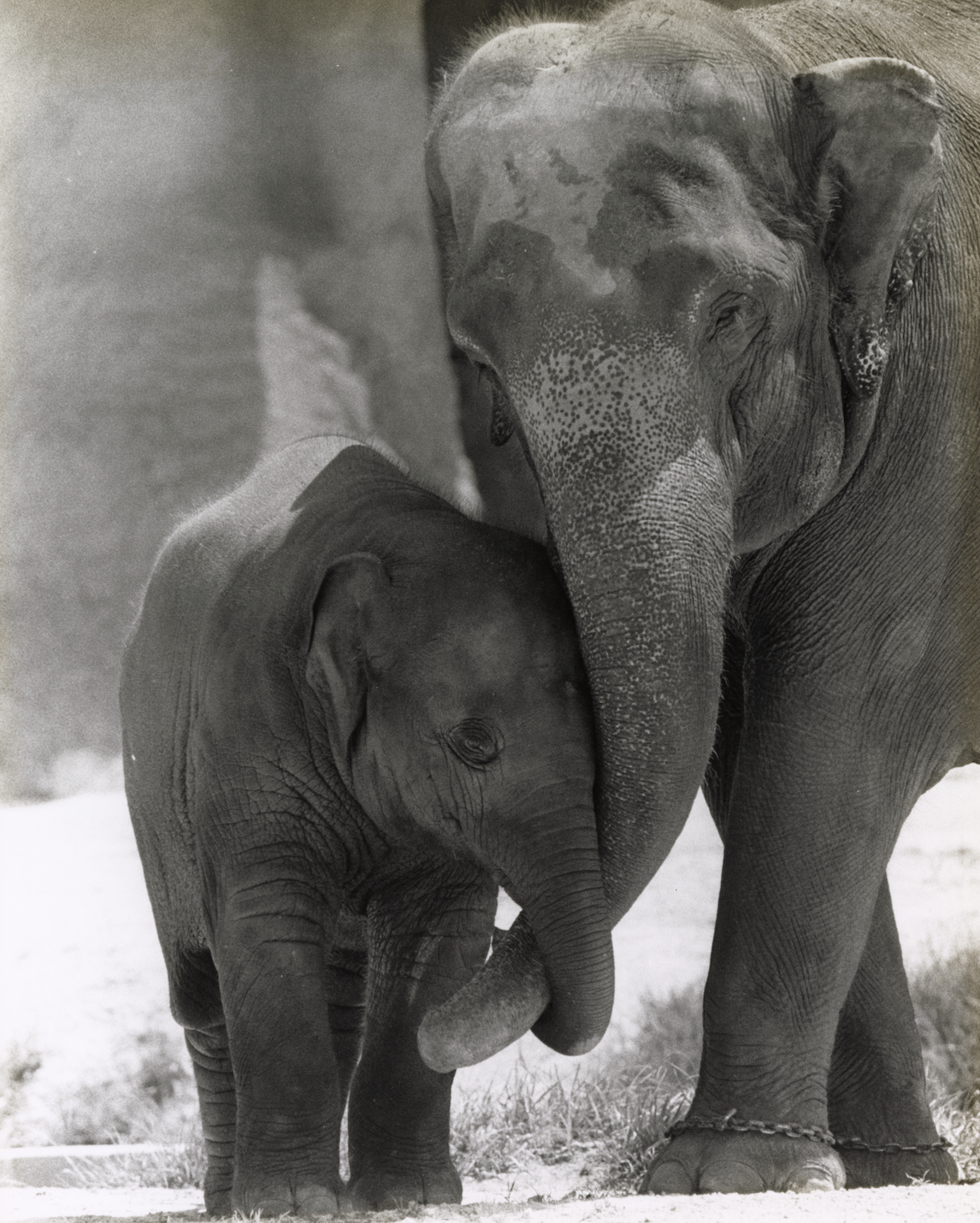 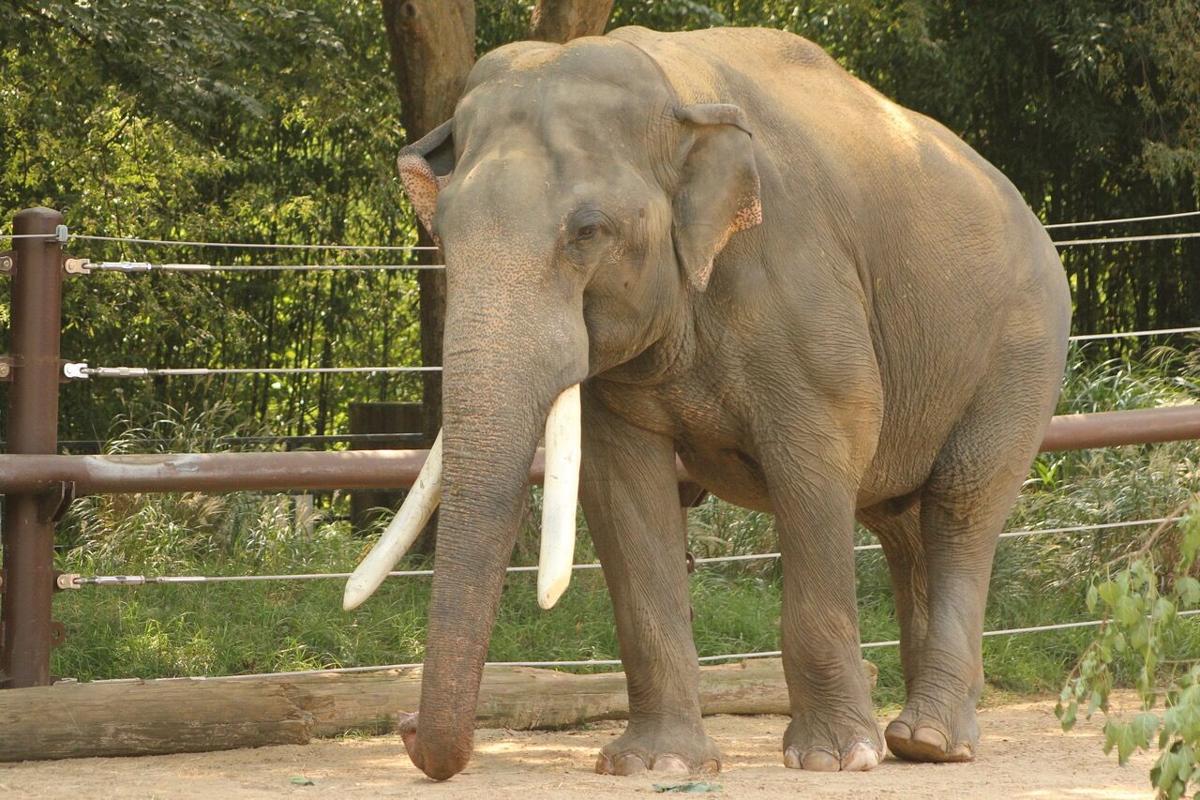 Spike and Rani now live at the Smithsonian National Zoo in Washington, D.C

I read with interest a recent snippet in the Islander’s Throwback section about the birth, in 1981, of an Asian elephant at Crandon Park Zoo. I grew up on the Key in the 1970s and 80s, though I now live outside of Washington D.C., but have no recollection of the birth.

The article piqued my curiosity and I began to wonder what ever happened to that elephant. Thanks to the wonders of the internet, I found him.

The baby was named Ganesha at birth, but his handlers called him Spike from the get-go and the name stuck. Spike’s mother, Seetna, and his father, Dahlip, were brought to the Key in 1967 from their birthplace in Kerala, on the southwest coast of India. A zoo brochure from that era pictures a beaming Miss Miami posing with the two young elephants shortly after they arrived.

Crandon Park Zoo opened in 1948, but by 1981 it was past its prime. At 25 acres, the facility was considered too cramped to safely house the 1,200 birds, mammals, and reptiles that lived there, many confined in cages much too small. And the county had wisely concluded that a barrier island was not the best location for a zoo, particularly after Hurricane Betsy circled back and struck the Key hard in 1965, flooding many enclosures and killing a number of zoo animals. So a 750-acre parcel in southwest Miami was acquired and developed as the Miami MetroZoo, later renamed “Zoo Miami.” At the time of Spike’s birth, zoo staff had already begun the complicated process of transporting their animals across the causeway to a new home 20 miles to the south.

The professionals and volunteers had taken great care of the zoo animals on Key Biscayne for over 30 years, but it was time to go.

Were it not for Crandon Park Zoo’s impending closure, Spike’s arrival might have generated more attention on the island. But Key resident Pat Kelly, who has fond memories of working at the zoo and serving as President of the Docent Council, remembers elation amongst zoo staff and volunteers when Seetna gave birth.

“The birth of an elephant was a big deal and a very momentous occasion,” Kelly said. “I even remember the dress I was wearing the day I first met him up close. It was pretty exciting.”

Ron Magill, formerly on staff at Crandon and now communications director for ZooMiami, was on duty the night Spike was born. “He came out with a big ‘splat’ on the barn floor,” he said. “Seetna remained standing the entire time. She did a great job and we were delighted by the birth of a healthy baby elephant.”

Spike, Dahlip, and Seetna were among the last animals to be transferred to the new zoo, just in time for its grand opening in December of 1981. The three elephants lived at MetroZoo until 1992, when Hurricane Andrew swept through and pummeled the zoo, causing extensive damage to the elephant enclosure. Fortunately, the staff had taken measures to secure the animals and very few were killed. After the storm, the elephant family was separated. Dahlip and Seetna were sent to the Two Tails Ranch, near Gainesville, Florida, while Spike, by then a full grown bull elephant, travelled further north, to the Calgary Zoo in Alberta, Canada.

Spike was not the only baby elephant born at Crandon, but he is the only one to survive. In 1977, Seetna had given birth to a female calf named Rocky who lived only two weeks. At the Miami MetroZoo, in 1985, she gave birth again, but her calf Pearl died after two days. Ten years later, at the Two Trails Ranch, Seetna conceived again, and this pregnancy would be her last. She developed complications during labor and died in 1996, taking her unborn calf with her.

In 1995, Dahlip — now spelled “Dalip” — returned to Miami, where he lives today. At 55, he is believed to be the oldest bull Asian elephant in North America. The zoo held a festive celebration for his 55th birthday, complete with a giant popsicle and a sheet cake made of flour and carrots.

After leaving Miami, Spike spent 11 years at the Calgary Zoo, where he was paired with the female Maharani, or “Rani” for short. Unfortunately reproductive success has eluded Spike and Rani. They produced female calves in 2004 and 2007, but neither calf survived beyond her second birthday. A third pregnancy in 2012, this one with twins, ended in miscarriage.

The Calgary Zoo eventually closed its elephant exhibit, and the animals were dispersed. In 2013 Spike returned to Florida, this time to Busch Gardens in Tampa.

In 2018, in accordance with the Association of Zoos and Aquariums’ Species Survival Plan, Spike and Rani were reunited. From my perspective, this is the most exciting part of the story, for Spike and Rani now live at the Smithsonian National Zoo in Washington, D.C. — just six miles down the road from my house. So it turns out Spike and I, both displaced Key Rats, are practically neighbors.

I recently paid the National Zoo a visit to see how Spike is doing. In a word: great! He shares a spacious enclosure with a herd of four females, including Rani, two other females from Calgary, and an addition from Baton Rouge. They have a pool to bathe in, a quarter-mile walking trail, plentiful sun and shade, play structures with enrichment activities, and a 4,000 square foot indoor space for shelter.

While visiting Spike, I had the opportunity to speak with one of his keepers, Jason Gue. While some bull elephants can be aggressive and ill-tempered, Gue described Spike as just the opposite. “He is a really sweet-natured elephant who is very laid back and just amazing to have around. He is a great addition to the herd.”

Spike now weighs 13,000 pounds. For such a large animal, he walks gently, seeming to tip-toe around the enclosure, his tail swinging like a pendulum. His tusks have grown eighteen inches since he arrived in D.C. and now measure about four feet long. Gue reports that Spike has a hearty appetite, consuming five bales of hay and fourteen pounds of grain a day. He also enjoys supplemental fruits and vegetables, especially apples, carrots, broccoli, celery and sweet potatoes. For extra hydration, he gets gatorade.

Perhaps because of his time in Canada, Spike is relatively tolerant of cold weather, choosing to stay outside at night until the temperature dips well into the forties. The more sensitive females—might I suggest, wiser?—retreat inside during cooler weather. But more in line with Spike’s Florida background are his sleep habits. While some elephants sleep standing up, Spike prefers to sleep lying down. And Spike takes to the water, too, enjoying evening dips in his pool. Like all Key Rats, he knows how to relax!

And now for the sad part of the story: Spike and Rani have yet to reproduce. While that may still happen, Rani’s fertility appears to be waning and her keepers are not optimistic. Because Spike is the only surviving offspring from Seetna and Dahlip, he is genetically valuable and a new mate for him may be sought.

Asian elephants are native to 13 countries throughout India and Southeast Asia, and their dwindling population in the wild is estimated to be between 30,000 to 50,000 individuals. Although habitat conservation is the real key to the species’ long-term survival, given the uncertain future for Asian elephants, captive breeding programs are considered essential to maintain genetic diversity. Let’s hope for the best.

As for his future, Spike seems unconcerned. He spends much of his time munching hay, slurping gatorade, taking dust baths, and basking in the sun with the females from Calgary.

If you would like to see live footage of Spike, Rani, and the other elephants at the Smithsonian National Zoo, visit the elephant cam here

Miami voters face critical referendum Nov.2 on future of Virginia Key development; KB voters not in on the action

Not a washout, but slow-moving showers could cause more flooding