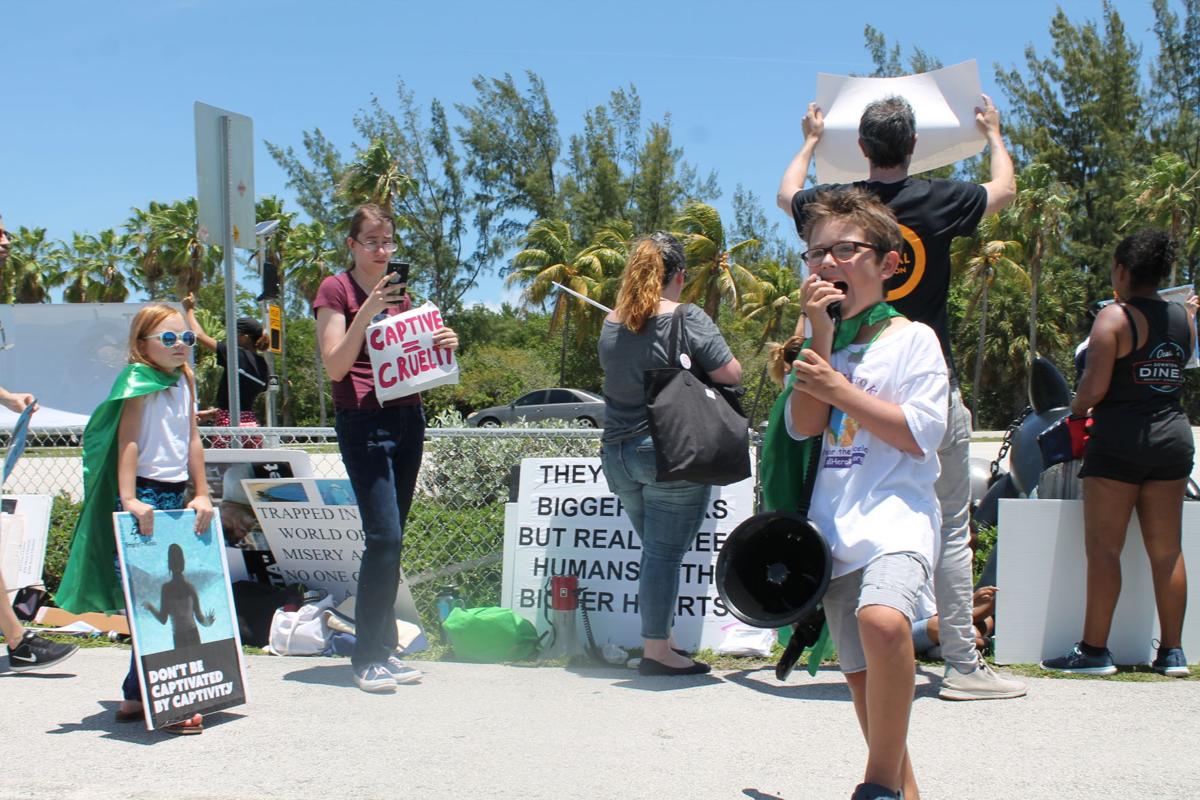 Animal Hero Kids President Evan asks Miami Seaquarium arriving visitors to reconsider attending and instead choose a family day on the beach at an “Empty the Tanks” and Dolphin Project protest event Mother’s Day weekend outside the park gate. 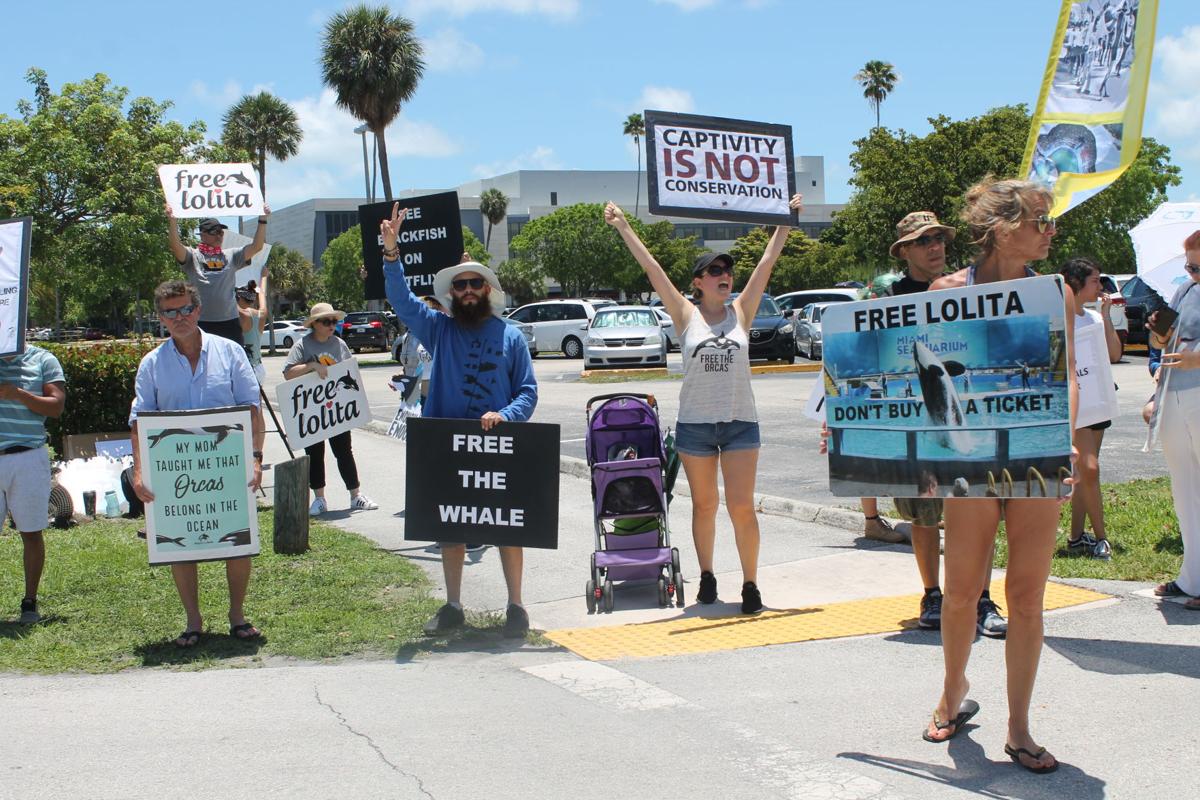 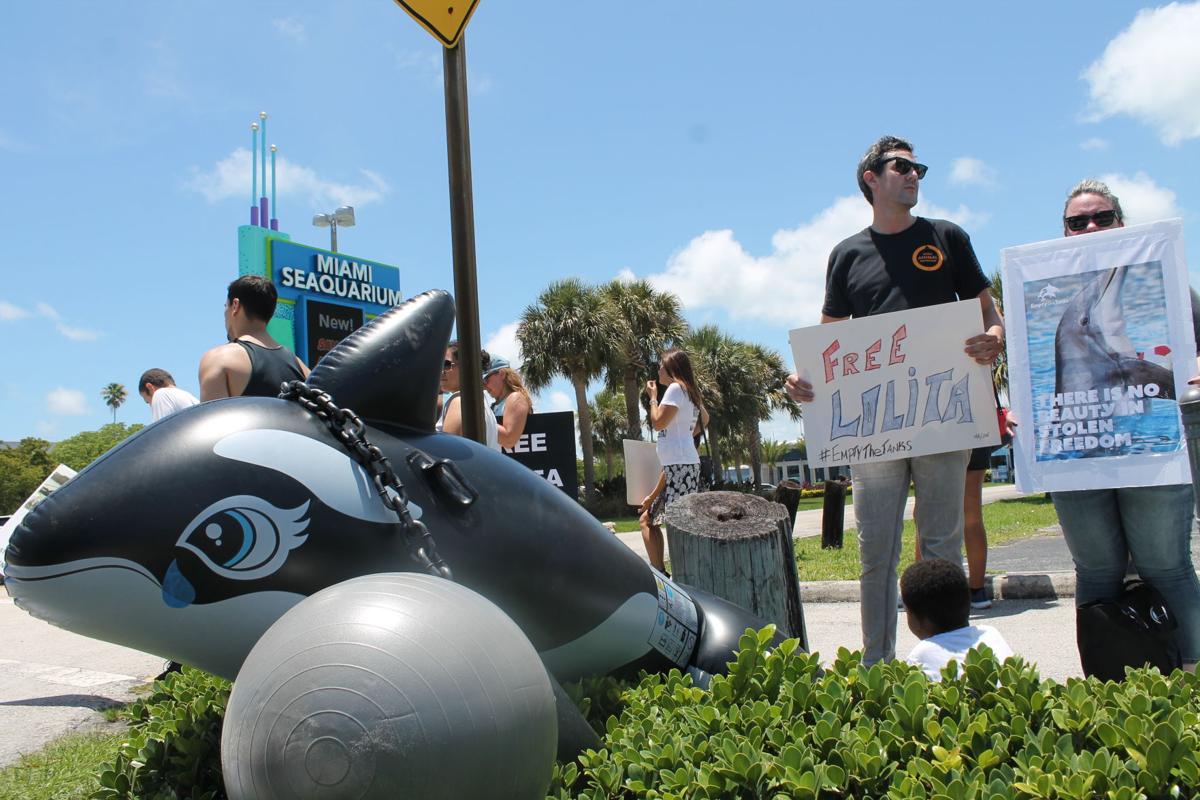 Ben Carlson Williamson and Julia Cappiello of World Animal Protection US (right) flew in from New York City for the day to join the protestors.

Animal Hero Kids President Evan asks Miami Seaquarium arriving visitors to reconsider attending and instead choose a family day on the beach at an “Empty the Tanks” and Dolphin Project protest event Mother’s Day weekend outside the park gate.

Ben Carlson Williamson and Julia Cappiello of World Animal Protection US (right) flew in from New York City for the day to join the protestors.

Approximately 100 protestors set out in a walk from Virginia Key Beach to the Miami Seaquarium Saturday May 11 starting at 10am Mother’s Day weekend for an “Empty the Tanks” and Dolphin Protection Project international event that slowed traffic along Rickenbacker Causeway.

Activists held signs for hours on a steamy hot afternoon and received frequent honks from cars passing by in an aim to “Free Lolita” the killer whale orca who has been held in a tank at that facility for 49 years, as well as dolphins, seals, and other animals at the sea park entertaining visitors with water show performances led by animal trainers.

Cars entering the seaquarium property were encouraged to turn around and go to the beach rather than pay the admission fee and stay.

“Your job as a parent is to teach your kids right from wrong,” said Don Anthony of the Animal Rights Foundation of Florida into a loudspeaker; one of many environmental and animal advocacy groups represented.

“Forced captive animals kept in a cement box with no relief from the hot sun until they’re dead is wrong,” he said.

According to Anthony about 10 to 12 cars had turned around by about 2pm as a result of their presence just outside the property along the pedestrian and bike trail.

Miami Seaquarium security on a golf cart patrolled the perimeter entrance making sure no protestors stepped onto their property. Loud music bellowed from the ticket gate in a possible effort to drown out the objecting picketers who were made up of mostly young adults, middle age men and women, and parents who brought along their children.

“Lolita was captured in 1970 when they put mini explosions along the boats to confuse the pod with loud noise and separate the mothers from their babies,” said Susan Hargreaves of Animal Hero Kids. She said her efforts over the past 25 years contributed to the closing of Ocean World in 1988 and similar facilities.

“Her mother screamed. She is still alive and with her pod according to researchers who follow the whales in their natural habitat of the ocean. Every orca taken that day is dead now except for Lolita.”

Julie Cappiello held a sign that read “There is no beauty in stolen freedom.” She and Ben Carlson Williamson of World Animal Protection US flew in from New York City for the event and were to depart that night.

“It is a simple concept to get and realize what is right and wrong here,” said Williamson. “Lolita is the world’s loneliest orca.”

Protests at the Miami Seaquarium is nothing new but Saturday’s turn-out was remarkable compared to the usual weekend stalwarts holding the classic sign “Watch Blackfish on Netflix” made famous by a sole protestor who stayed on the site longer than most.

The documentary film shows at times violent footage documenting the mauling and killing of trainers by killer whale orca Tilikum from Seaworld, and other orca related injuries and fatalities to their trainers. The central story is about the death of trainer Dawn Brancheau on January 6, 2017.

The incident launched the Department of Labor’s Occupational Safety and Health Administration to sue the park in lawsuits demanding barrier net protections for trainers. Tilikum died that same year by a reported bacterial infection.

Editor’s Note: The Miami Seaquarium is a frequent advertiser with the marketing department at Islander News. Park general manager Eric Eimstad declined to be interviewed for this news story, nor would he confirm or deny conversations Susan Hargreaves of Animal Hero Kids claimed she had with him on the same day we attempted to reach him for comment.

Hargreaves is hoping he might consider working with their group and others to transition the seaquarium, as have other similarly themed parks (now banned in Europe and other areas of the world) into a water park. They are lobbying for a gradual change in Lolita’s holding pool situation to a sea pen, and then ultimate release back into the wild to be reunited with her family pod.

Miami Seaquarium statement regarding Empty the Tanks Day (issued May 13)

The “Empty the Tanks” annual campaign by animal rights activists paints a distorted picture of what marine mammal park and aquariums offer and ignores the value of the high-quality educational programs and conservation efforts of accredited institutions and the quality of care they provide for marine mammals.

Miami Seaquarium is accredited by the Alliance of Marine Mammal Parks and Aquariums (AMMPA) and is Humane Certified TM for the care and welfare of the animals at the park by meeting the American Humane Association’s rigorous certification standards. Not only do marine mammals receive the highest quality of care and thrive at accredited member institutions,

but certified member facilities also connect millions of people each year with the chance to see and learn from these amazing animals up close and in person.

For over 63 years, Miami Seaquarium has been committed to providing the highest quality care to all the animals at the park. To underscore the excellent care that our animals receive, Miami Seaquarium received in 2018 certification by American Humane, the country’s first national humane organization and the world’s largest certifier of animal welfare and well-being, through the American Humane Conservation program.

As a result of meeting the many welfare requirements involved by the “Humane Certified” program, Miami Seaquarium joined a select group of fewer than two dozen leading zoos and aquariums in the United States and less than one-half of one percent of all zoological institutions in the world to have earned this certification. This recognition, which is based on rigorous, science-based and comprehensive criteria for animal welfare, pertains to all the animals at Miami Seaquarium.

Miami Seaquarium cares for marine animals. It is what we do. Institutions like Miami Seaquarium play a vital role not only in our society’s understanding and appreciation of animals, but also in the preservation and conservation of marine wildlife.

The educational and inspirational experiences children and adults have when they see marine mammals up close and in person at our facility provides a positive and lasting impact on visitors.

These important interactions help visitors better understand ocean conservation, how their actions affect the health of our oceans and what they can do to help improve it.

Incorporation has made all things better on Key Biscayne

While Matt LaFleur has ‘one plan’ for Packers’ training camp, the coach knows one guy — Aaron Rodgers — remains vital