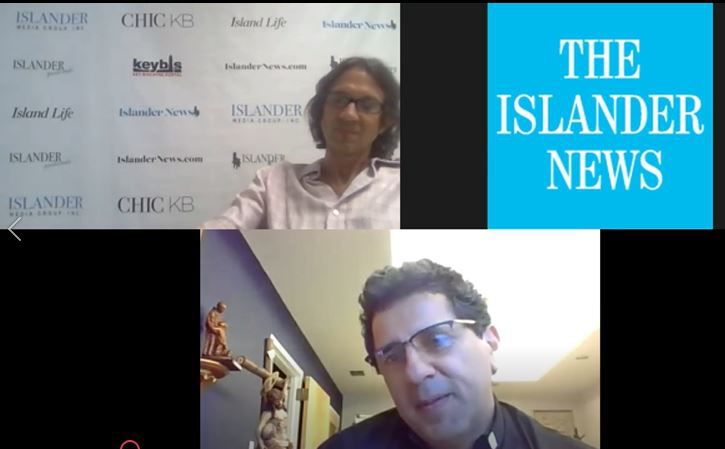 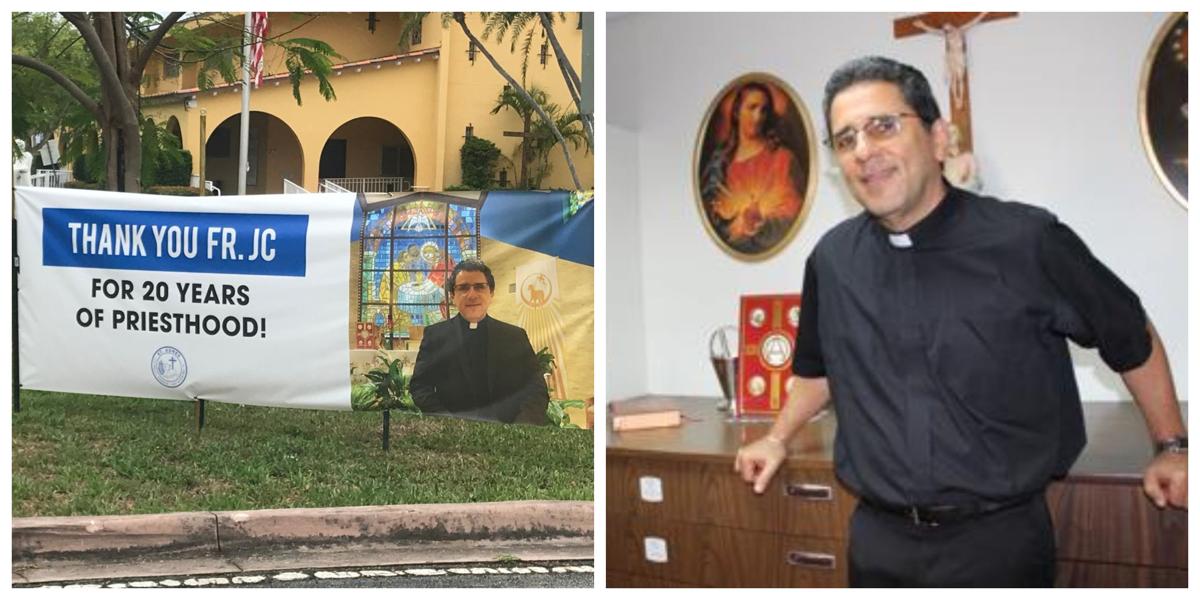 He was an undocumented immigrant who walked along the dangerous border of Mexico for a month to enter the US. Like so many newcomers, he worked in construction. He didn’t know any English. He came to Miami and for years lived here in the margins of poverty. He became a priest. And today, Father Juan Carlos Paguaga works in a community that has raised about $18 million for a new church and academic center, at St. Agnes. Father Paguaga just celebrated 20 years as a priest, in strange times of confinement and pandemic. He recently sat with the Islander News to tell us some of his story.

IN. How do you feel about your 20-year anniversary of priesthood?

FJCP. I woke up one day and realized that 20 years had passed. And the feeling I have is of peace. It has been a life of dedication. I have been able to walk 20 years serving God. It has been a privilege to be a priest. People’s trust when confession comes. Knowing the most intimate pains of people in the midst of their despair and anguish. And (knowing) that people trust us with the advice and peace that we can give. To be able to give comfort, or baptize in the name of the church, to give communion and bring Christ -- all of this is a very great privilege.

IN. What are the memories that are always with you and have marked you in these 20 years?

FJCP. Every time I come to a parish it is a strong moment that marks me. It is a new beginning, a community that you do not know, being able to earn the trust of the people. The love that people give you strongly marks you. Another thing that marks me a lot is working with the poor. I have worked a lot with the poor in Little Havana. Prostitutes, people who lived in cars and didn’t have food to eat.

IN. How do you feel on a day to day basis in Key Biscayne, with such a different reality? Here there is no poverty, no marginality. How has that enormous contrast of realities traveled?

FJCP. When I came here I saw that poverty was not like elsewhere and hunger was different. Many times I see a poverty that is different, because when we have everything and we don't need anything materially we can be spiritually poor. Even if you have nowhere to sleep and what to eat one day, if there is faith and hope you can live with joy. The basis of holiness, Don Bosco said, is a happy heart.

IN. Long before becoming a priest you were an immigrant without papers. Tell us about your arrival in this country.

FJCP. I walked the border for almost a month, from Mexico. We were hungry. We walked with a group of seven people, and often among dead people. We were shot a couple of times. I was barely 20 years old and had been escaping from a very sad reality. I had lost everything in Nicaragua, after the devaluation of money and the death of my father. My father was killed at the age of 41 as a result of the political situation in Nicaragua, and we had to go to Guatemala with my mother. I was looking for a political asylum. Thank God I was able to get here alive. Upon arrival I worked in construction for a long time. I didn't know any English.

IN. Coming to the United States must have changed the perspective of many things. A world so different, with so many opportunities. How did your religious vocation awaken?

FJCP. It was something I brought from childhood, a vocation that was always there. When I got here, the party started, the night owls. There were several girlfriends. I like to dance a lot. We went to Stefano’s nightclub, which was previously in Miami Beach. At the time, I did not want anything with the church. I got far away. But one day, I felt that I had strayed so far, so far. They called me to invite me to a group of young people. I started going and one day some seminarians were talking about their vocation. I realized that this was my thing, what I needed. And I contacted the Archdiocese. So, the weekends were no longer partying. Everything changed

IN. What are moments of your religious life that you enjoy the most?

FJCP. I really enjoy giving mass, but confessing is what I enjoy the most. Listening to people who come loaded with pain and being able to be a means of healing is one of the most beautiful moments there is.

IN. How do you face critics of the construction of a new church and other works in St. Agnes, for an estimated cost of $18 million?

FJCP. The initial plan was not to make a new church, but teams were formed to study these works. Three focus groups were made with people from the parish, and a majority recommended doing this. The church itself is not going to cost $18 million. There will be a gymnasium that will serve for acts, sports and community events. There will also be a ring road, which will facilitate traffic that is quite complicated within the academy. The work of the church is also complicated because it must be raised to a certain number of feet above sea level.

IN. How have you been during these times of confinement and Coronavirus?

FJCP. We have not stopped working. The offices were never closed and we have been providing care to all the people who have had the need. And people have not stopped calling and asking for interviews. There has always been something. I have not taken a day off. Something that I find very interesting about St. Agnes is that it is a very close community, with unconditional love -- a family that I have rarely encountered. Here, we have been able to grow in evangelization. And the support of the people has been incredible. I have no words to thank this community for the love and support they have given me.

What was making news on the island August of 1986

Florida can’t get by without seagrass; it’s essential to the continued health of our waterways… and feeds manatees

'They couldn't take it anymore': Hospital exec says employees are walking off the job