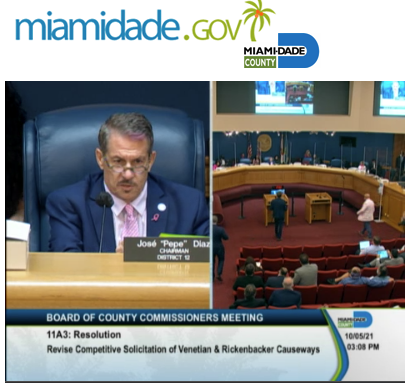 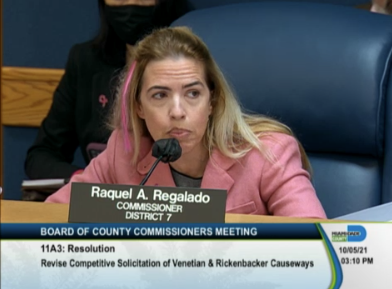 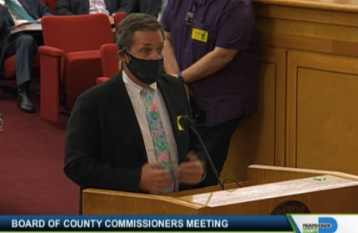 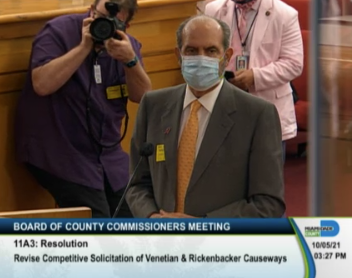 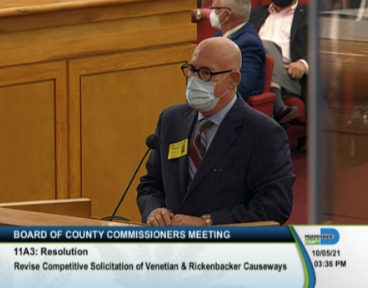 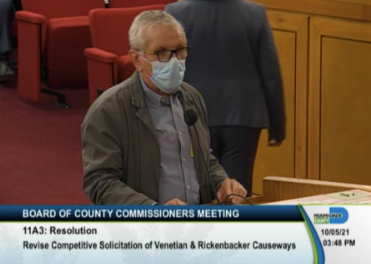 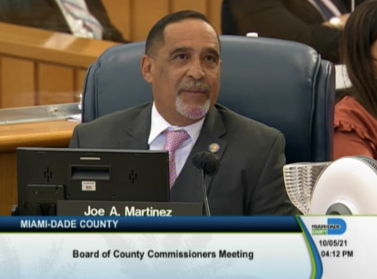 Despite pleas from several of the 18 public speakers — including the mayor of Key Biscayne and a county commissioner — to shut down the current Request for Proposal (RFP) regarding the privatization plan for improvements to the Rickenbacker Causeway, the Miami Dade County Board of County Commissioners did not do that.

Instead, it voted Tuesday to extend the RFP timeline to March 1, 2022, in order to incorporate a deeper financial analysis.

Officials also unanimously voted to remove the Venetian Causeway from the solicitation during the nearly two-hour segment of the commissioners meeting.

At times, the ground rules associated with the “Cone of Silence” aspect of the Plan Z Consortium’s Rickenbacker RFP confused many as to what could or could not be discussed.

At one point, Commission Chairman Jose “Pepe” Diaz said, “Maybe this should have never been a P3 (privatization matter), but whatever ...”

The sticking point came when Diaz asked why the financial worthiness of the proposal, referred to as “value for money” by County Mayor Daniella Levine Cava, was not done before the RFP actually went out to bidders Aug. 15. Mayor Levine Cava said she directed her staff to do an “emergency procurement,” which will be made available to the public — and potential bidders — at the end of October.

Also, District 7 Commissioner Raquel Regalado, who represents the Key Biscayne area, proposed, and the board seem to agree, to allow other bidders to showcase their ideas at properly noticed, public Sunshine meetings, which would not interfere with the Cone of Silence rule.

Bernard Zyscovich, who heads the Plan Z Consortium, sent a note to the Islander News after the meeting saying, “The Plan Z submission will adhere to the new timeline approved by the County Commission. We look forward to submitting a proposal that will ensure the Rickenbacker Causeway is structurally sound.”

Key Biscayne Mayor Mike Davey was joined by Council members Brett Moss, Allison McCormick and Luis Lauredo, as well as Village attorney Chad Friedman, as those asking the Commission to consider starting the process over.

“To date, the stakeholders have not had a say in the design ...they’ve been left in the dark,” Davey said. “This is such an important infrastructure project and it needs to go back to the start.

It’s unworkable at this time. I’m beseeching you all at this time (to reconsider) ... we want something incredible for the (entire) county.”

Lauredo said there was a lot of complicated language in the RFP. “The flip side of complexity is simplicity,” he said. “There are thousands who come to work here and others who have the best days of (their) life here. This is not just another project. It’s the single most important real estate of your county and it requires more thoughtful engagement.”

Several Key Biscayne residents were on hand to offer their support for the county to rescind the RFP and start over, including former Village Mayor Mayra Lindsay Peña and Juan Santaella, who was wearing a Say No To Plan Z button.

Lindsay said she was asked to work on a Rickenbacker proposal several years ago, adding that a project of this magnitude would likely run $500-$600 million.

“Context matters,” she said. “Rickenbacker is the only road to 2,000 acres of public beaches, state parks ... a million people come to Bill Baggs, hundreds of thousands go to the beaches ... if this (RFP) is supported, it will limit affordable opportunity,” she said, adding that she thinks tolls could be expected to run anywhere from $6 to $10 dollars.

“Please reject this,” she pleaded to commissioners.

Ceci Sanchez said, “The Z Plan has many positive facets, but (the RFP) negates participation by stakeholders.” She also said the privacy portion of the RFP “raises suspicion.”

Louisa Conway said not only is it important to continue to allow low-income county residents to have the affordable access opportunity to the parks and beaches, but also the safety of the MAST Academy students. “Their safety is tantamount,” she said. “It’s difficult to get those kids to school (now) with all those cyclists.”

Fausto Gomez, who called the process “opaque,” said there has been “no citizen participation of Key Biscayne residents.”

“This is important to all residents of Miami-Dade County, and no one knows anything about the project,” he added.

One commissioner, District 11 Joe A. Martinez, who represents part of SW Dade, wasn’t sold on why there is even a proposal. “This is as important to county residents as the airport and seaport,” he said. “But any plan that allows the bidder or concessionaire to set tolls is a no ...

“The government’s job is to protect life and property ... and now we say the county can’t do it,” he added. “We (Miami-Dade County) just went through a $9 billion budget ... you’re hurting people from everywhere. What are the tolls going to be like — 10, 20, 30 dollars? ... I don’t believe we should give our natural resources to a private entity.”

At one point, Martinez commented, “Plan Z should be Plan RIP.”

Zyscovich, an avid cyclist who has done several projects in Miami-Dade County, was the last of the public speakers on the RFP.

“This is all my fault,” he said. “I had this idea, riding my bike and in my line of work thinking maybe he could save others from unnecessary tragic accidents on the causeway). For once, someone brings something to the county from the heart and makes something special ... (But) I learned there were many more issues (such as Bear Cut and sea level rise).”

Miami voters face critical referendum Nov.2 on future of Virginia Key development; KB voters not in on the action