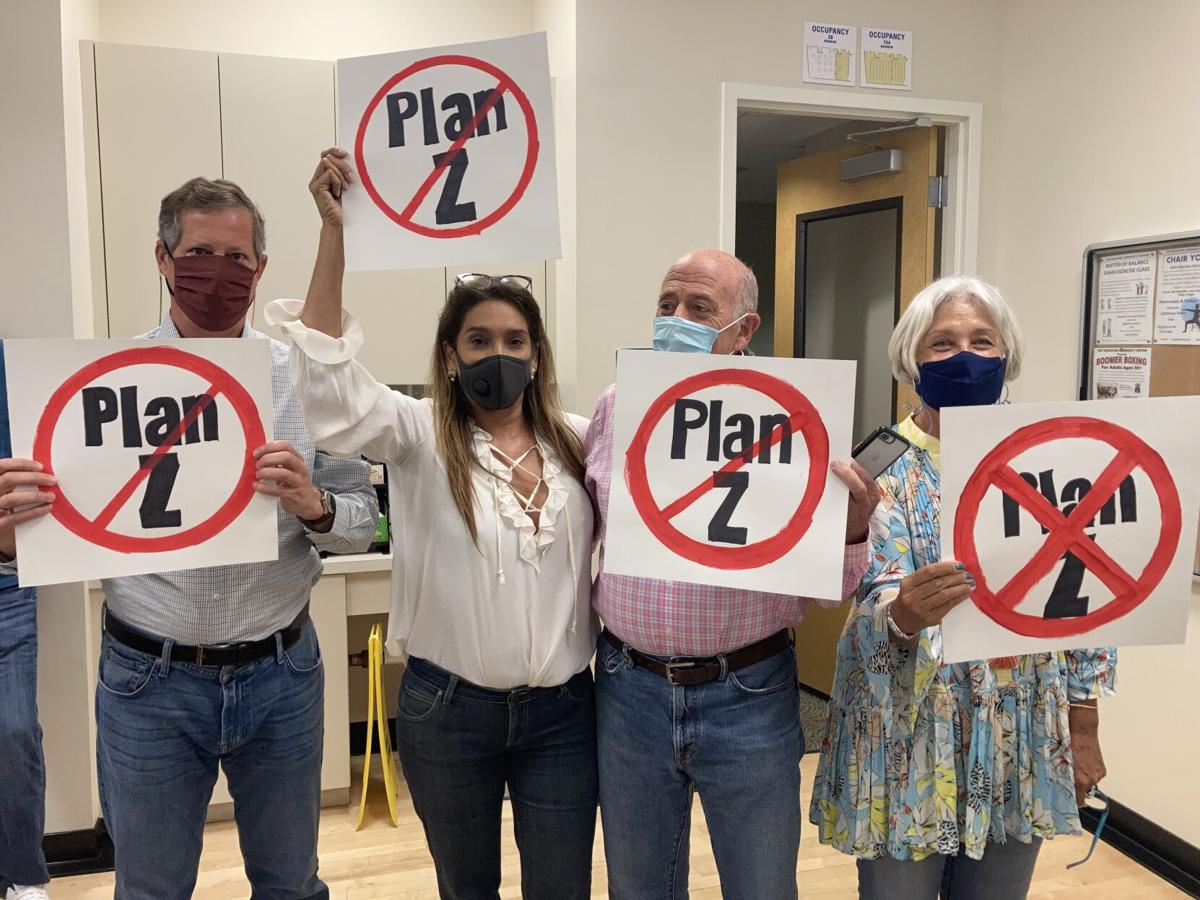 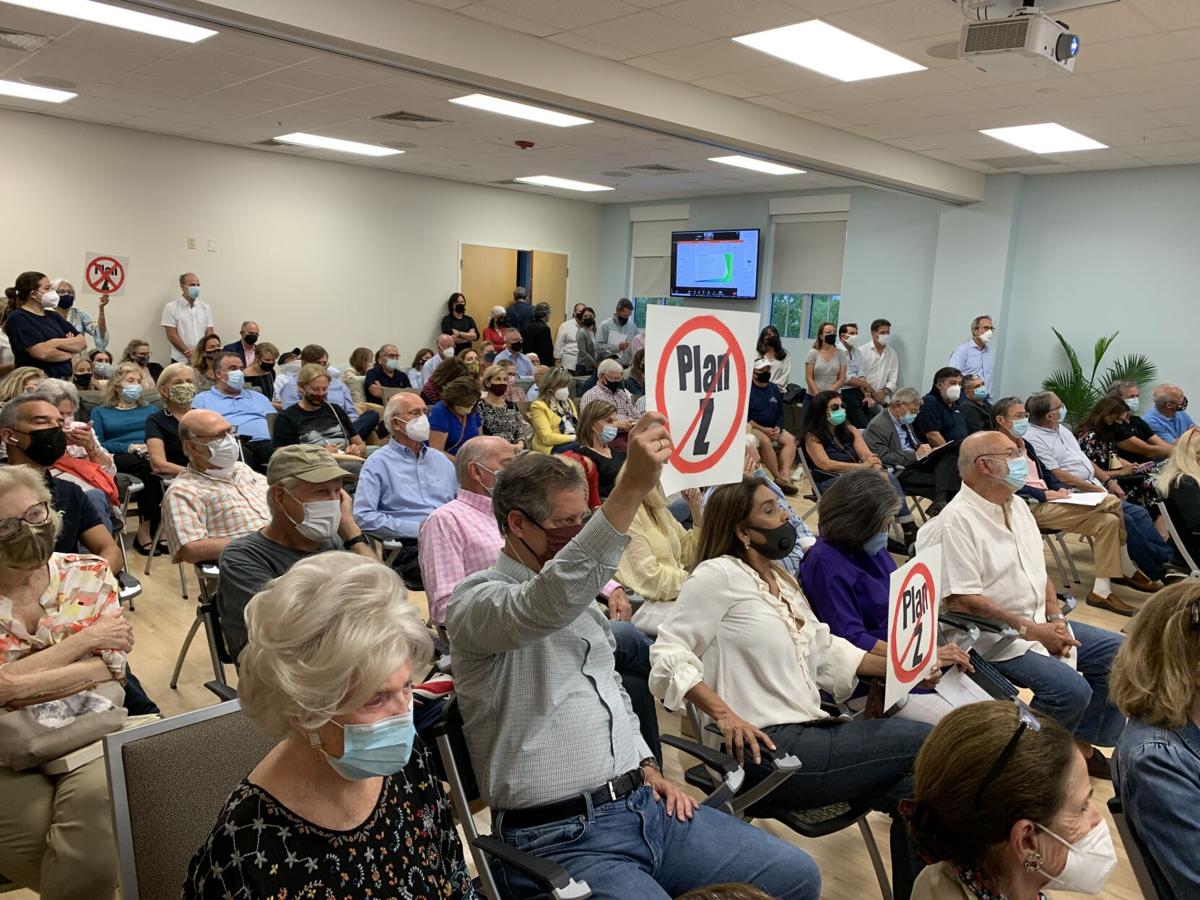 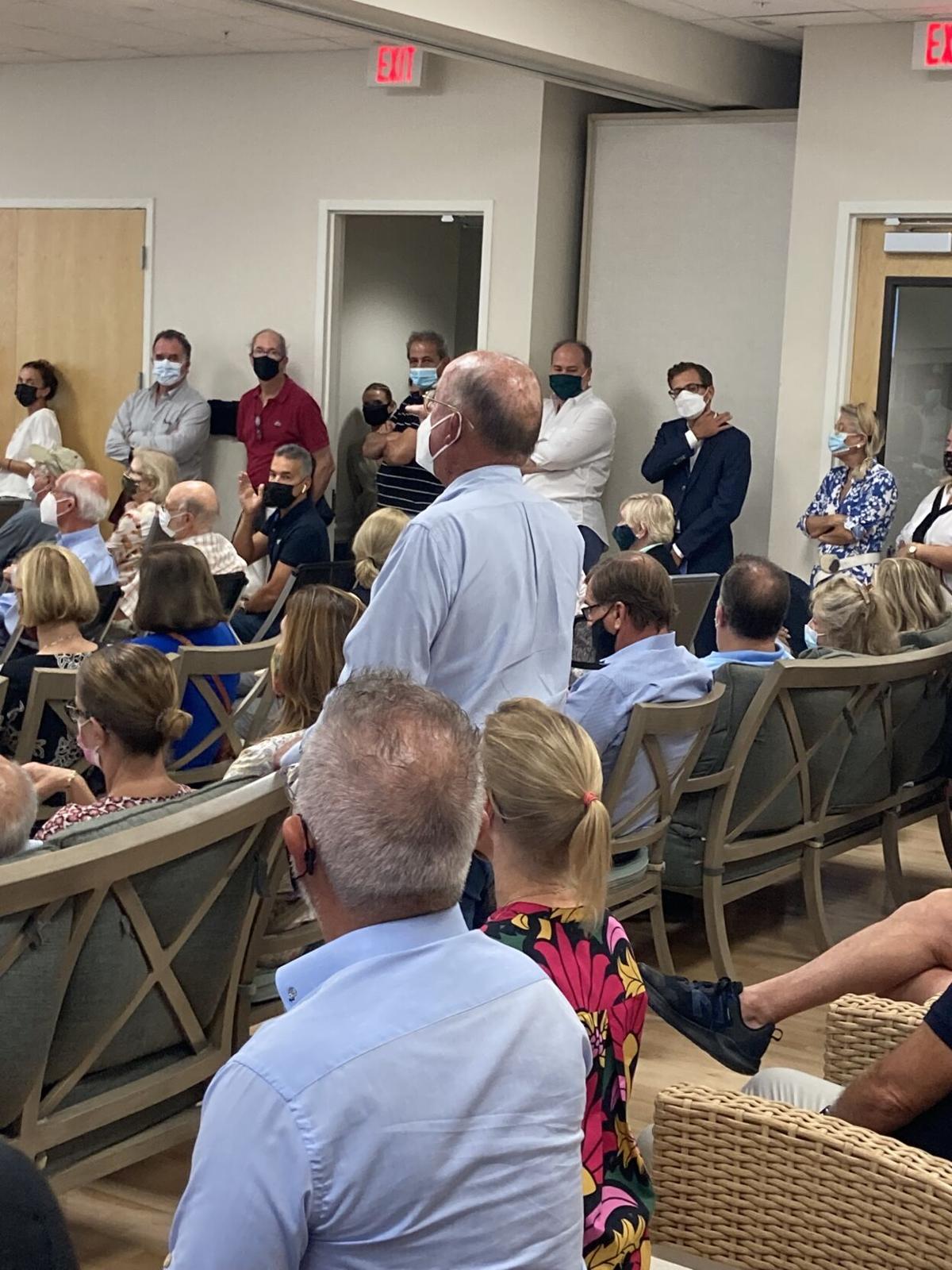 Years ago, when one of his jokes would go awry, comedian Rodney Dangerfield would tug at his collar and smirk, “Tough crowd.”

Miami-Dade County Commissioner Raquel Regalado probably felt the same way at Wednesday night’s Town Hall, where an overflow crowd — some carrying signs with a red circle and a slash through the words “Plan Z” — heckled, guffawed, and even booed at times during presentations at the Key Biscayne Community Center.

It was Regalado’s idea to bring members of the County staff working on the proposed RFP to privatize the Rickenbacker, including those from the Parks, Recreation & Open Spaces (PROS) department, to address issues and concerns from island residents.

It was the third time Regalado has been in front of residents since the RFP process first came to light, but the passion and intensity of Key Biscayne residents was never more evident than on Wednesday night.

“It seems this has become adversarial,” Regalado said of the room’s intense demeanor. “This is not my RFP, it’s not their RFP “(referring to county’s staff). She added, “We’re not here for or against anything...”

One member of the audience later addressed Regalado (who represents the County’s District 7 which includes Key Biscayne). “…I thought you were advocating for us,” he said, explaining that “access to our homes will be challenged by a project which we don’t understand.”

A harbinger of the evening took place just before the start of the meeting when two people were removed in handcuffs for refusing to wear a mask inside a Village building.

County staff tried answering each of the 19 major concerns the Village has collected and sent forward to County administrators. But seems attendees had their own concerns, including the entire RFP process its confidentiality clause; the future of tolls; the flow of traffic; the safety of bridges; and why privatization is needed when grants and federal money, for instance, could be supplied banning the need for privatization.

Veteran attorney Gene Stearns, looking out for the best interests for his fellow residents — just as he did 30 years ago as one of the driving forces behind the city’s incorporation — received the most applause, especially earlier in the evening when he questioned the entire process.

“If the train is going to fall off the track, wouldn’t you stop it before that happens?” he asked later. “The decision to privatize the causeway ... where’s the money coming from? It’s coming from grants and gifts ... why are we giving it to a private organization? You could have killed it the first day, when you opened the file (back on March 3). The time to stop it is now ... not after a year and a half…”

Officials with the county and its legal team will investigate if the December 13 submission deadline can be extended a second time, after Key Biscayne Vice Mayor Ed London said the village didn’t get a fair amount of time to put together a possible proposal, something the Plan Z Consortium folks put together in two years, he added.

Village Manager Steve Williamson said the Village found out about the RFP just one week before it went to the County Commission on July 8.

Some other nuggets from the meeting:

One resident brought up the idea of an overpass for MAST Academy students, which is in the RFP proposal, according to Maria Nardi, Director of PROS. Regalado, who said it could take perhaps 5-7 years to build the bridge, will take that idea to the Florida Department of Transportation to see if that project could begin sooner.

Regalado said she is already in talks with the County hoping to get crossing guards at the school, as well as speaking to FDOT about improving the safety at the Key Colony intersection.

Mayor Levine Cava will have a representative from the Village on the selection committee, said Nardi, who applauded the “passion” of those who attended the two-hour meeting.

Regalado assured the audience that “We can change the RFP ... there is still time,” she said, pointing out the recent proposed change to remove the Venetian Causeway from the Rickenbacker proposal, as requested by Commissioner Sally Heyman.

Ryan Fisher, Manager of Highway and Bridge Engineering for the County, that “all the bridges are safe” on the Rickenbacker Causeway. “They’re inspected by FDOT every two years and ... we continue to maintain these bridges (regardless of the outcome of this RFP),” he said, pointing out that already-approved repairs for Bear Cut Bridge and the Venetian Causeway will move forward.

Toll rates — and Key Biscayne residents’ annual pass rate — will not be changed without the Board of County Commissioners’ approval. This caused some boos and laughter from the skeptical crowd.

So far, the County has received zero proposals to challenge the Plan Z Consortium, but it’s still early in the process. Once the bids are in, County officials will appoint a committee to evaluate proposals and that recommendation is expected in March 2022.

The Village can submit its own proposal, but the Cone of Silence prohibits bidders from approaching the Village.

Rita Silva, the procurement officer assigned to this project, explained that the unsolicited proposal has a time element of confidentiality per State Statue and County Code. “We don’t know who’s getting this contract yet,” she said, only leading to laughter from the crowd, who has apparently perceived the bid going to Plan Z, the only expected bidder.

Fausto Gomez, who has studied the RFP as best as possible, questioned the authenticity of the proposal, particularly since a couple of the prominent players linked to the RFP and the Plan Z Consortium has, or had, ties with the PROS department.

“What confidence do we have as citizens that this is not a compromised (project)?” he asked. Gomez also questioned the word “conceptual” being tossed around, “... for instance, the RFP (indicates) we’re going to have a 14-foot fishing pier, so it is design-specific,” he said.

Morales assured the crowd that Mayor Levine Cava will take a hard look at the ultimate winning proposal, just like she has done with other important issues.

“If she doesn’t think it’s good for the people of Miami-Dade County or the people of Key Biscayne ... she will view this in full objectivity and ... like Commissioner Regalado, is not afraid to be contrarily,” he said.

Regalado told the audience what her personal view of the RFP has been.

“I’ve been skeptical about this (privatization) from the beginning,” she said. “... I don’t think the RFP should contain concessions and billboards ... it’s a little much.”

Regalado assured the audience she will represent Key Biscayne on the County Commission. “And we’ll circle back,” she said, “and if there are changes to be made, we will make them.”

To address additional concerns, email Rita.silva@miamidade.gov with your questions.

Seagrass is essential to the health of Florida’s estuaries, waterways and marine life