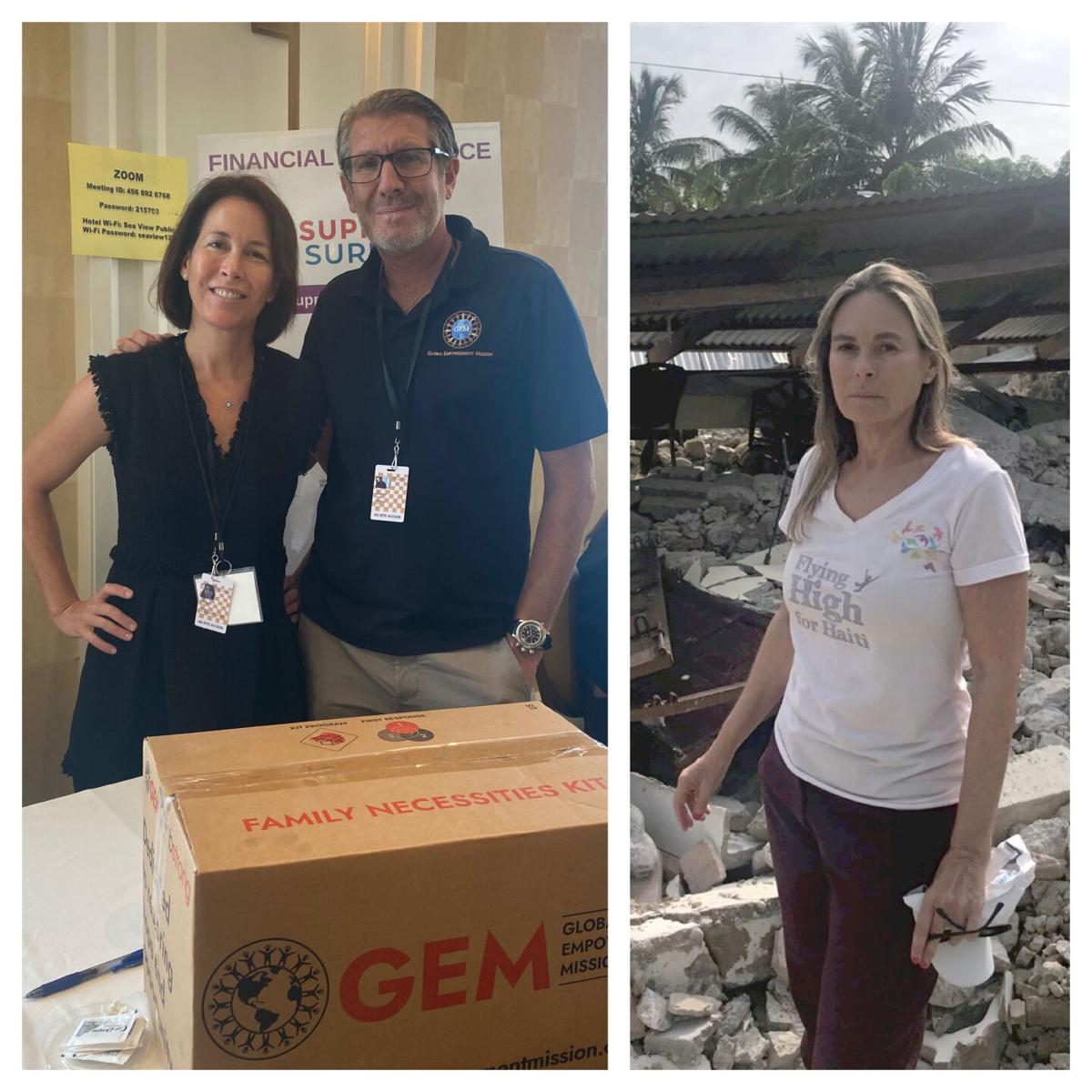 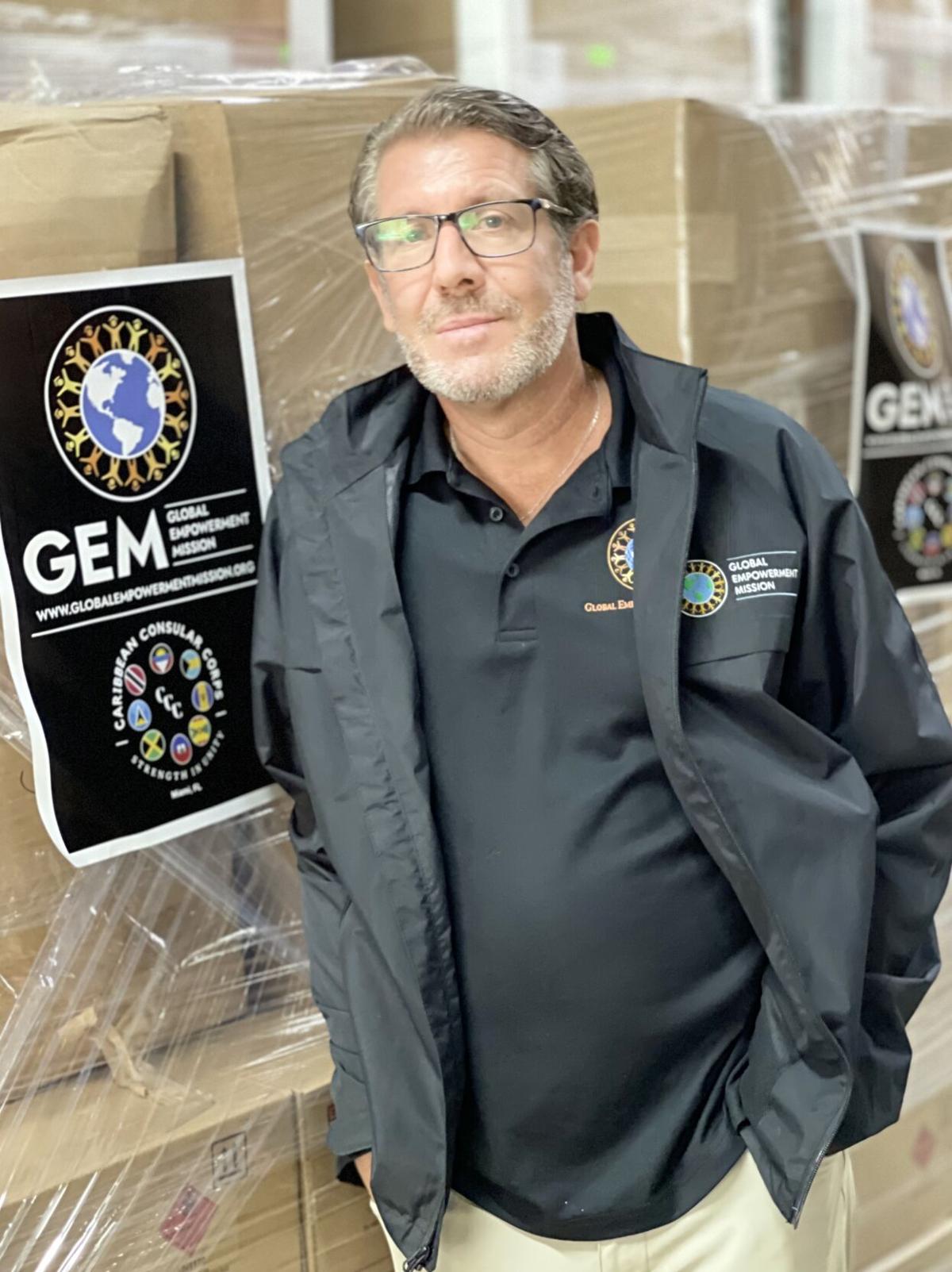 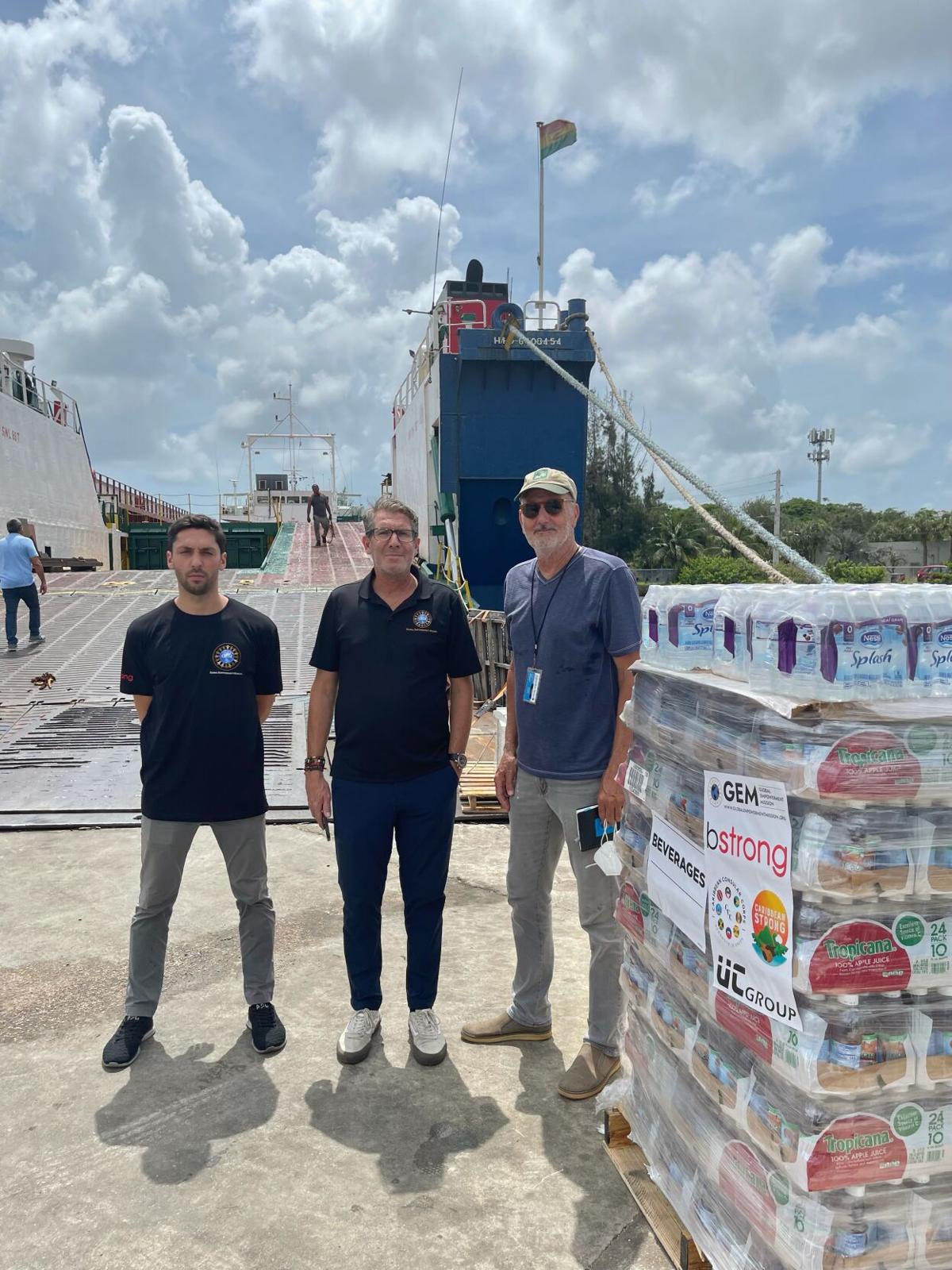 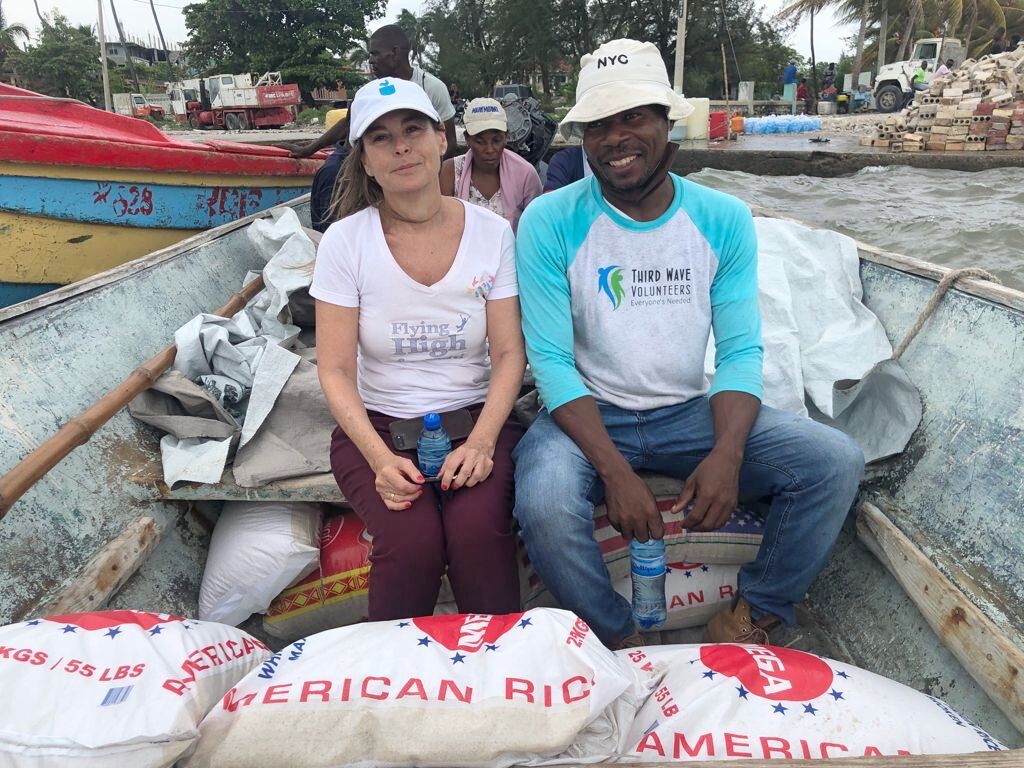 Ines Lozano and another volunteer, Wesley, taking relief supplies by boat from the port of Les Cayes to Ile-a-Vache.” 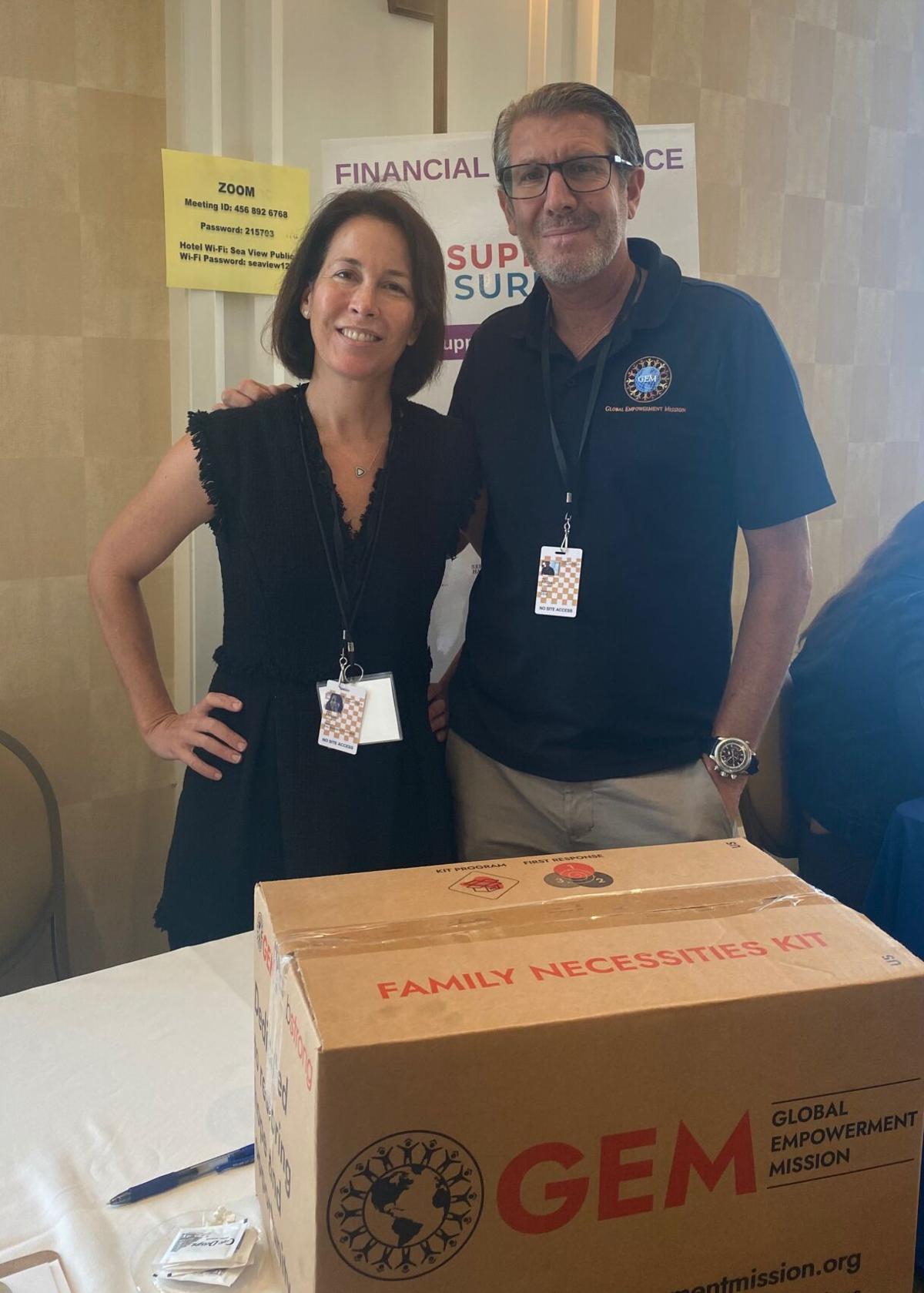 If there is a bright spot to recent tragic events in the world, it is seeing the compassion that individuals, companies and organizations display when they offer assistance to those in need.

After the tower collapse at Surfside, the Key Biscayne Community Foundation and the Global Empowerment Mission both stepped forward to help. The two organizations shared a table at the Family Assistance Center, where they dispensed basic necessities and $1,500 Visa gift cards to affected families.

“Helping people who were impacted and basically had lost everything was satisfying work but left me emotionally distressed,” says KBCF Executive Director Melissa McCaughan White, who spent two weeks at the assistance center immediately after the collapse. “I would get home and just want to crawl under the sheets and cry.”

Key resident Ines Lozano has taken a more focused approach to helping. Her non-profit, Flying High 4 Haiti, sponsors a small school in Ile-a-Vache, an island off the southwest peninsula of Haiti.

“I have been traveling there three times a year since 1990. We were able to build a six-room school and hire eight teachers in a remote village that is lacking all modern conveniences, including paved roads and running water. The people there live a tranquil existence far removed from the violence that plagues many other parts of Haiti.”

The Global Empowerment Mission was founded in 2011 by former Key resident Michael Capponi. I knew Capponi when he was a teenager on the Key in the 1980s, when riding his bicycle around the island seemed the most important thing in his life. He later moved to Miami Beach and became a successful nightclub promoter and owner, and then a highly respected building contractor for high-end luxury homes.

One of his friends describes the scene at Capponi’s home during the heyday. “Celebrities, musicians, business people—anyone you could think of might be there.”

I recently met with Capponi at the 30,000 square foot warehouse in Doral that serves as GEM’s headquarters. GEM, originally named the Haiti Empowerment Mission, started off by focusing on humanitarian work in Haiti but has since expanded to work globally.

“Name any catastrophe around the world in the past five years, I was on the scene within 48 hours,” recounts Capponi.

I asked Capponi why the shift to humanitarian work. “Sometimes destiny just hits you so hard that you are forced to re-evaluate your life’s priorities. I gave up the glitz lifestyle to focus 100% on helping others. That’s all I do now.” He says the skills he acquired in the business world serve him well in his new vocation. “Promoting a non-profit is not that different from promoting an event at a club.”

While I was visiting with Capponi, a Lyft driver arrived at the warehouse toting several boxes of flyers. Capponi opened the boxes and carefully inspected the flyers, commenting on the print job and paper quality. The flyers listed homes and apartments that were being made available to impacted families, at no cost, by GEM in partnership with the Alexander Team at Douglas Elliman Real Estate.

I looked over one of the flyers and realized that Capponi was right. The flyer resembled a promotional piece that one might see for a hot band at a trendy night club.

Except this was a flyer designed to help people in need.

For Aaron Rodgers and Davante Adams, the message to Packers players (and fans) is simple: ‘We’re going to be OK’