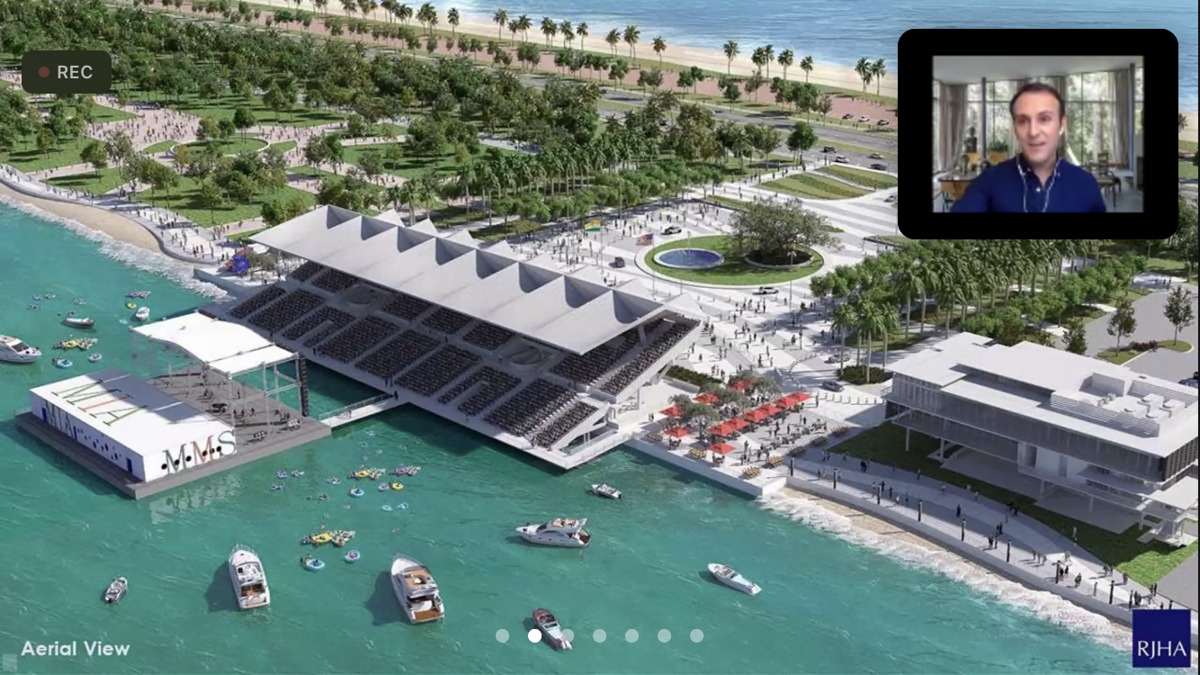 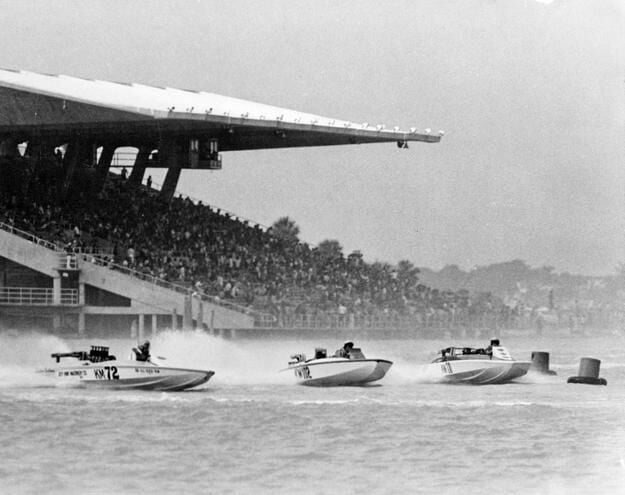 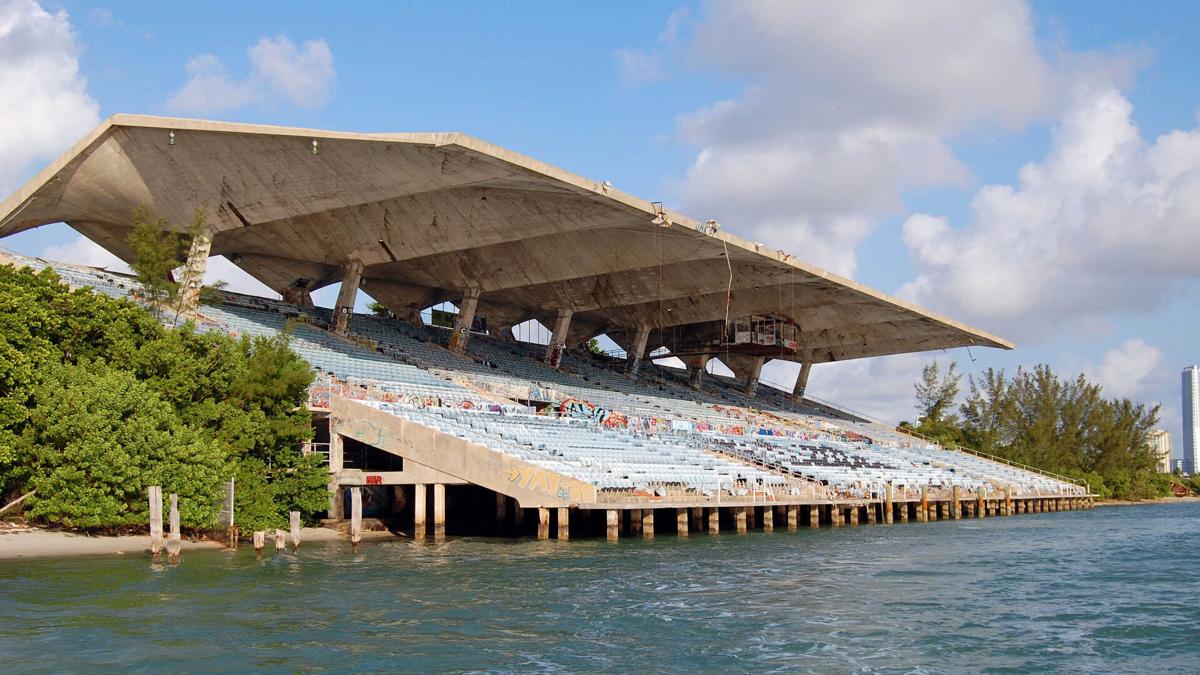 It’s where Jimmy Buffett once cooked up his “Cheeseburger in Paradise,” where you could attend a Queen concert for $3 — even by boat — and where some of the world’s fastest powerboats churned up waves to nationally televised audiences in Biscayne Bay.

The latest effort to restore venerable Miami Marine Stadium on Virginia Key is more than just preserving concert acts from a floating stage. It’s about throwing a life preserver to one of the few remaining echelons of Cuban architectural marvels in the Miami area.

“Some of us don’t have history in Cuba,” said Miami-Dade Commissioner Raquel Regalado, who was born in Miami. “There are very few buildings from the ‘60s and ‘70s (with a Cuban design). People come from all over and they can go back (to their own architecture). We don’t have that lujo (luxury). Miami Marine Stadium is that to us.”

Monday evening, Regalado hosted a Zoom panel discussion entitled, “The Most Cuban Building in Miami ... From Havana to Miami: The Architectural & Cultural Significance of Miami Marine Stadium” with several dignitaries. Among them was Hilario F. Candela, who in 1963, as a 28-year-old immigrant from Cuba, designed the 6,566-seat stadium that has survived hurricanes, humidity and even a hasty demolition decision.

“Miami Marine Stadium presents itself as special,” he said during the all-Spanish speaking discussion. “There have been many opportunities over the years for the City (of Miami) to listen ... but many years have passed since its grand presence and there’s been much change, like climate change and the 1992 hurricane (Andrew) that did so much damage ... The voice of Miami Marine Stadium emerged and I’m here for the city.”

Candela pointed out that after Andrew, a study done by the city “said the stadium was damaged, but it was erroneous ... and they were going to knock it down.”

In 2008, the World Monuments Fund jumped on board (with the local Friends of Miami Marine Stadium), putting it in the same breath as otherworldly magnificent structures to preserve, such as Machu Picchu in Peru and the Taj Mahal in India.

Candela said as far back as 2010, he’s used the word pausa (pause) to explain the progress because “each time they continued to talk about it, the public wanted it and there was international support for it.

“This pausa is a little longer than what it should be and I think there should be no more pausing,” he added. “It needs to stop and reality starts. The stadium is weary of pauses. The stadium wants to come back in an extraordinary art form.”

When the stadium was constructed, costs came in at about $1 million — under budget, Candela said — and there was a $900,000 charge to dredge the basin.

The 326-foot-long structure — built on land donated by the prominent Matheson family — has eight big slanted columns and a cantilevered fold-plate roof that defies its age.

“I’ve always loved Miami,” Candela said. “That stadium (and the location) was like a dream, the most important area there for (views of) water and land — very few places in the world where a place like that existed.”

“The roof is like a replica of the reflection of the water and the sound of the water against that roof is a remembrance,” Candela said. “It was a dream, but you had to proceed with caution ... We had carpenters on the roof who had experience with woodworking (craftsmanship) on the ships in Miami.”

Today, despite the tropical heat, summer rainstorms and even hurricanes, the roof has stood the test of time, said Rosa Lowinger, President/Chief Conservator of RLA Conservation of Art+Architecture, who showed a screen grab of the roof from a video.

“Hurricane after hurricane didn’t knock it down,” Lowinger said. “It hasn’t had any maintenance in 30 years, but closeups of the roof, which gives that structure its identity, looks immaculate.”

Lowinger said contemporary and modern architecture is not easily understood.

“(Back) in the ‘20s and ‘30s, Art Deco took a while to understand,” she explained. “Buildings like these represent a specific time. ... it’s important in Cuba in the ‘50s and ‘40s. That architecture (without copying from other countries) represents its own community. ... We don’t have a Chrysler Building or, say, an Independence Hall. Our area is (built on) modern architecture.”

The stadium has been the scene of Elvis Presley’s “Clambake” movie, concerts from Gloria Estefan to the Boston Pops to The Beach Boys, Easter sunrise services, professional boxing matches, hydroplane races, and even a memorable hug on stage by President Richard Nixon (then a Key Biscayne resident) to entertainer Sammy Davis Jr.

“The list is so long,” Lowinger said. “It was difficult to maintain that level of programs.”

She explained that after Hurricane Andrew, when the city declared the structure unsafe, FEMA provided money for the demolition. But when a subsequent study said the stadium was structurally fine, the city gave the money back to FEMA.

Lately, the stadium — once known as a scenic area for marriage proposals — has been the home of graffiti artists, and preserving their artwork also is being considered.

The site, Keeping it Modern, lists more than a dozen structures — such as the Sydney Opera House and the Miami Marine Stadium — that it considers of crucial importance.

The stadium also was recognized by the National Trust for Historic Preservation as an architectural masterpiece and was named to the 11 “most endangered” list in 2009.

“We have a jewel,” Lowinger said,

Preserving a structure like this one goes beyond the concrete and galvanized roof.

Javier Ors Austin, Program Manager with the World Monuments Fund — which identifies 25 worldwide projects and implements work within two years — said, “It’s not just for the value (of the structure), but for the economic impact it generates and reopening it to the public for tourism, which has an impact on the economy.”

The restoration plans are done and ready to send out to bid and find a developer. Talking with representatives from the city, the County Commission, calling and sending letters all help the cause.

“Just to explain that we have an opportunity to restore something so valuable that represents the Cuban-American (heritage),” Lowinger said. “Art Basel wouldn’t be in Miami Beach if those buildings were not restored ... and that economic change (made that) like a central art area, and Miami Marine Stadium has that same factor.

“This building already has earned awards and has already brought in money (from other benefactors). We don’t have to start over. The train has already left the station.”