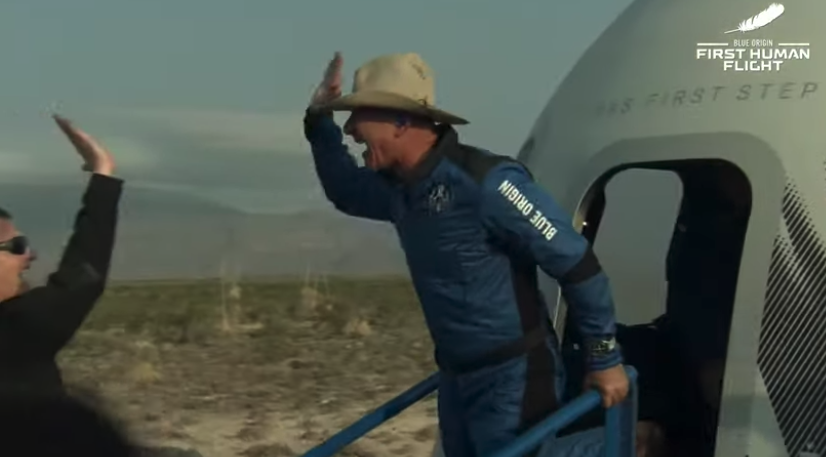 On Tuesday, Amazon founder Jeff Bezos added the title “astronaut” to his “World's richest man” title after launching into space in a capsule lifted by the New Shepard rocket, travelling 66 miles above the surface of the Earth with his own firm Blue Origin.

After blasting off from “Launch Site One” in Van Horn, Texas at 9:12 a.m. EST, Bezos and the Blue Origin crew reached space 4 minutes later to cheers from the crew of four on board.

The capsule and crew returned to Earth in a soft touchdown in the desert at 9:23a.m. EDT) to cheers from the ground.

Once the capsule landed safely back on earth, Bezos described the experience as the “best day ever.”

Bezos was joined on the flight by his brother Mark, Dutch teenager Oliver Daemen, who became the youngest person in space, and former NASA trainee Wally Funk, 82.

Funk, was part of the 1960s Women in Space program which was shut down and despite testing better than some of the Mercury 7 astronaut scores, she never got to go to space. Tuesday, she became the oldest person in space.

Before blasting off, the four went through two days of training, including lessons on what to experience, as well as experiencing the entire launch in a “capsule simulator”.

In the capsule Bezos said, “That was incredible, that was unbelievable,” adding that “I was surprised how easy zero g was, remarkably natural”, with the younger Bezos, Mark, saying it was “like swimming.”

Sir Richard Branson, who became the first billionaire to fly to space in his own firm's launch vehicle on July 11, replied to a video shared by Bezos on Instagram, saying “Best wishes @JeffBezos and the @BlueOrigin crew from all of us at @VirginGalactic.”

Blue Origin said sales for future flights are now open, with the next flights already booked by people who bid in the auction for a seat on this flight. While not confirmed, cots per ticket is rumored to be $200,000.

For the entire days event and flight, click here.