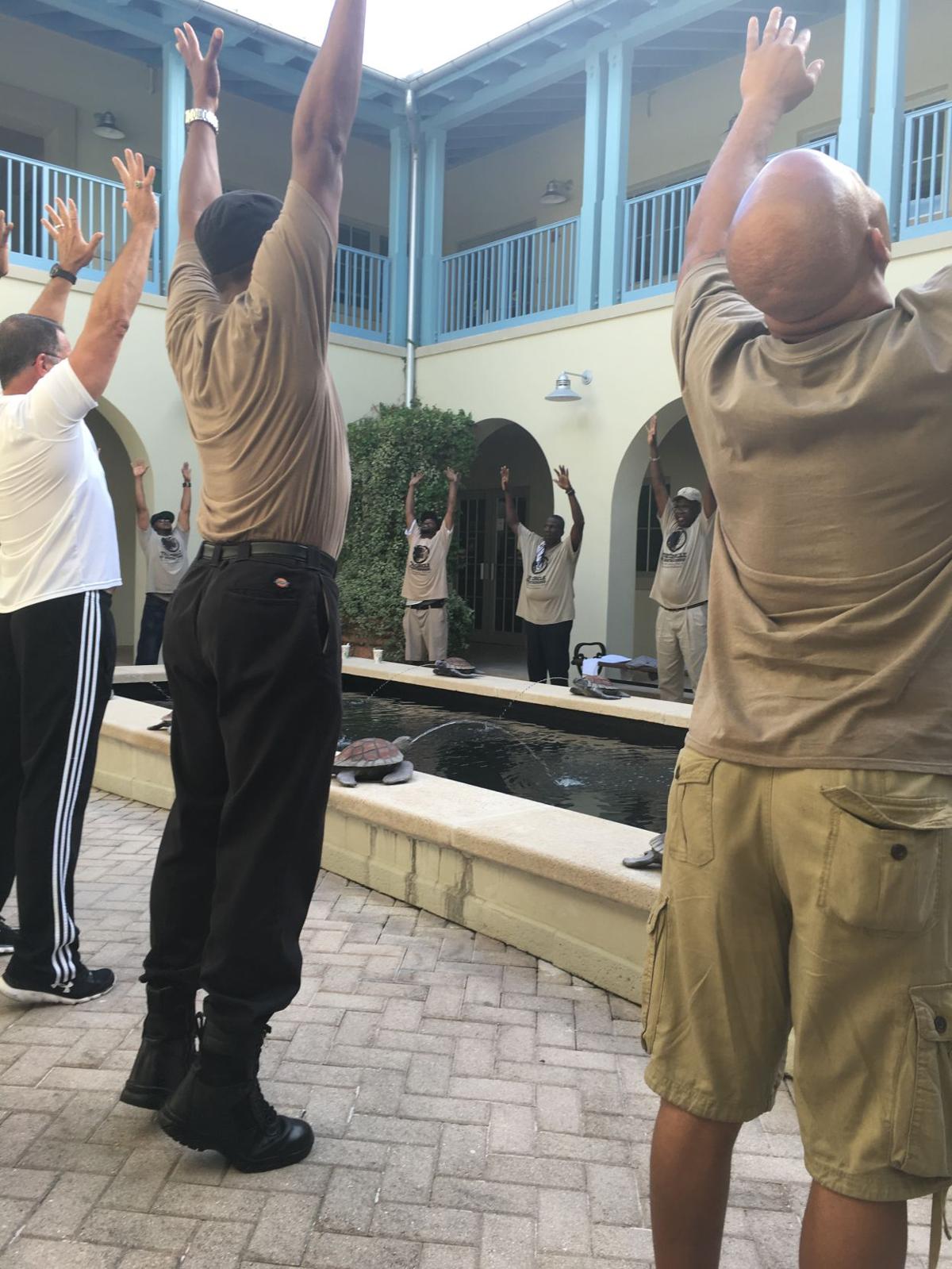 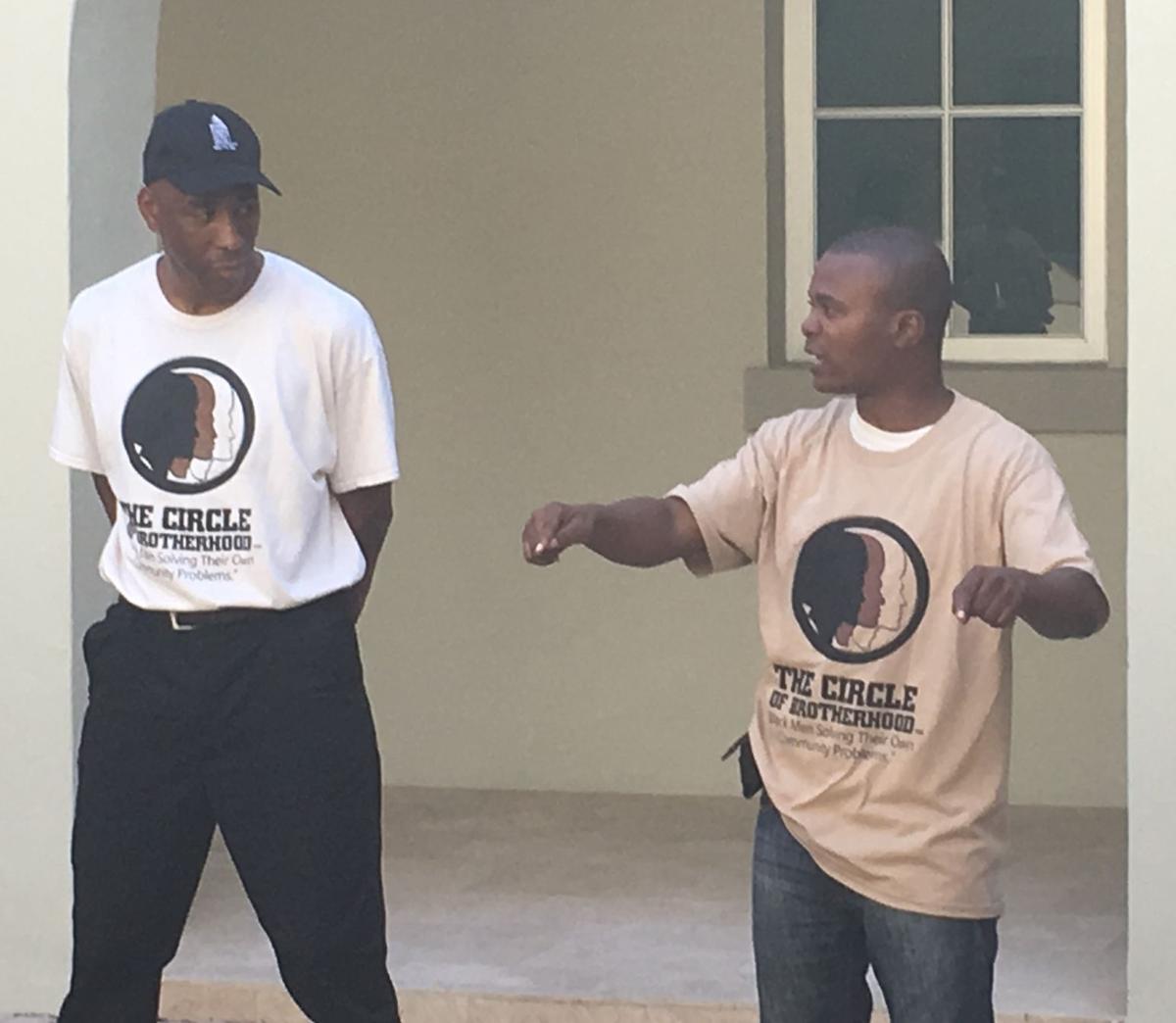 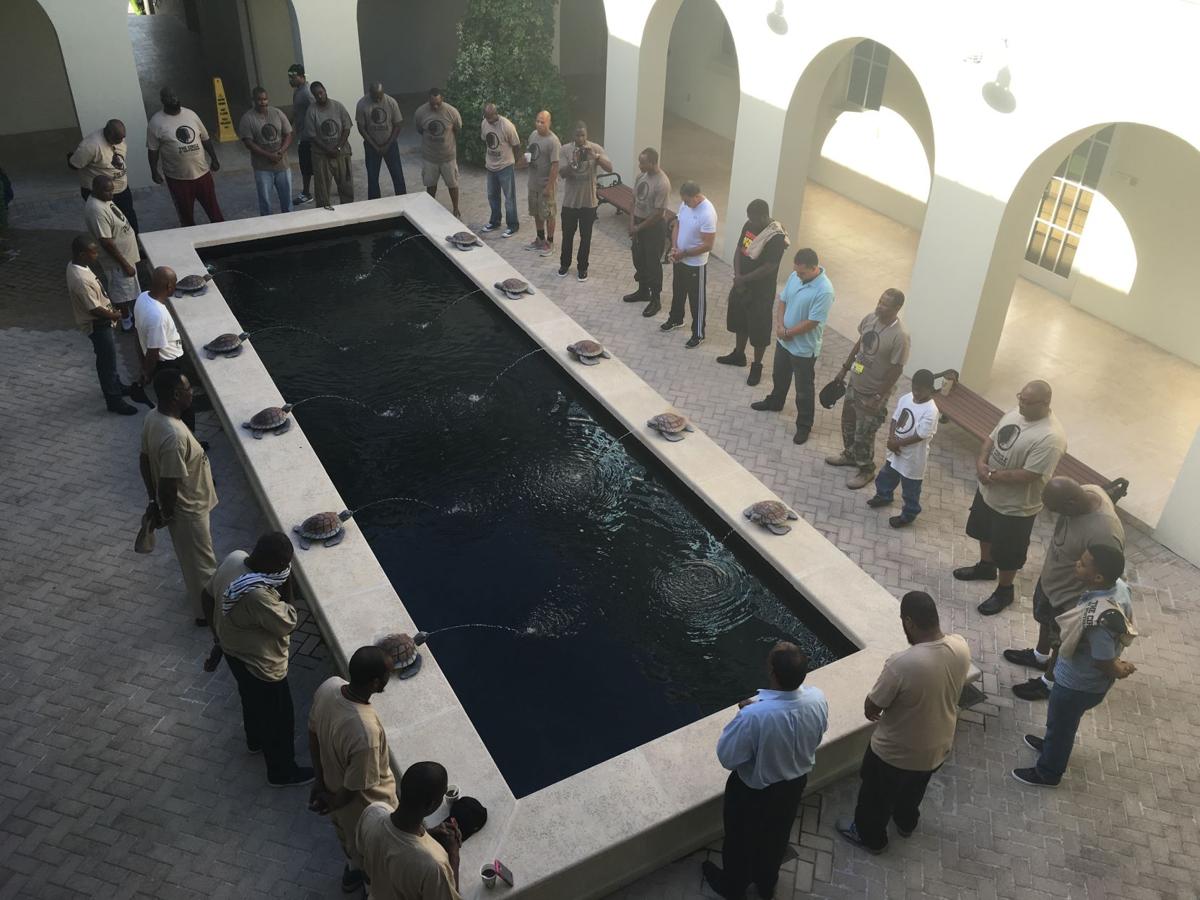 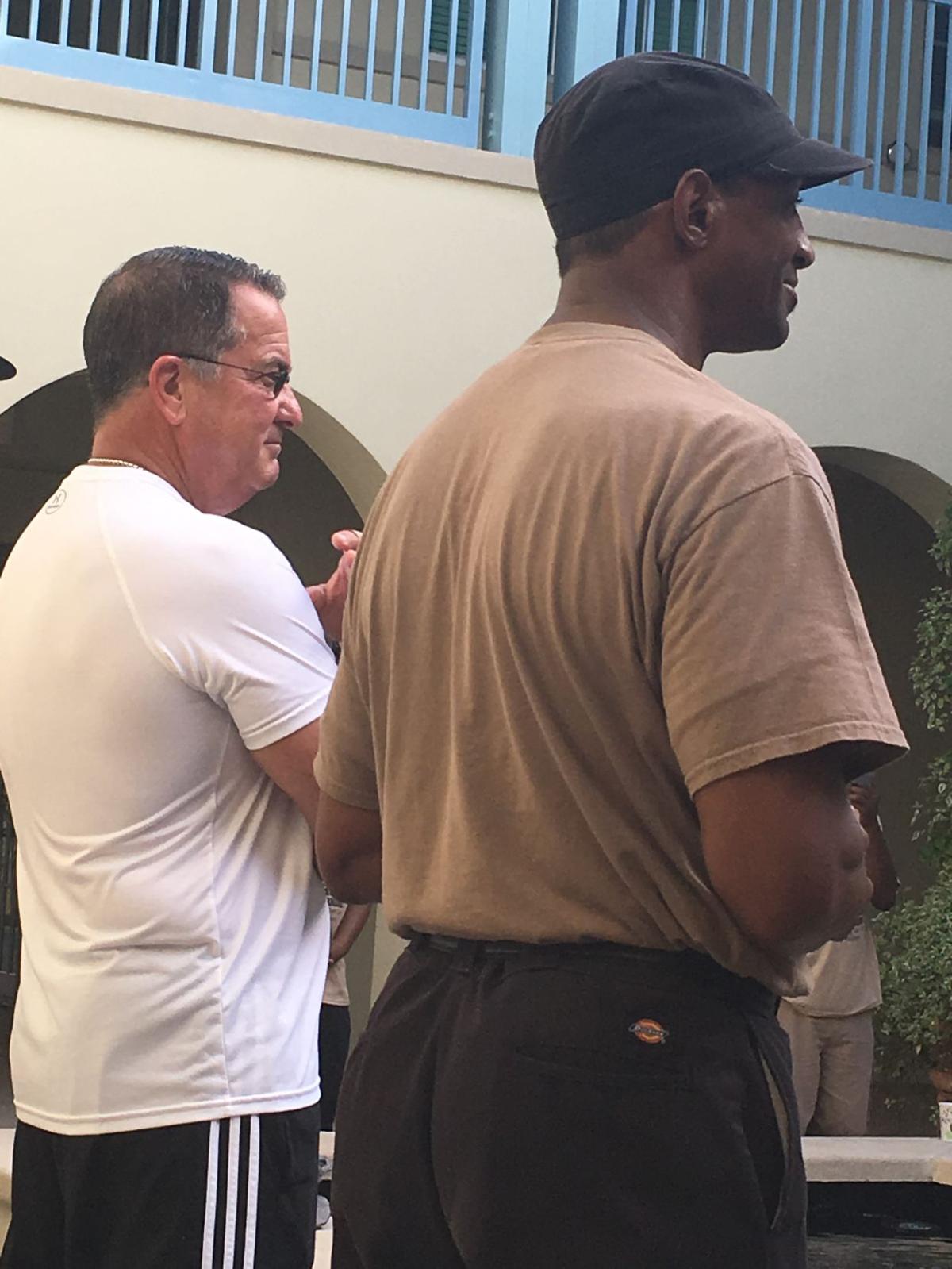 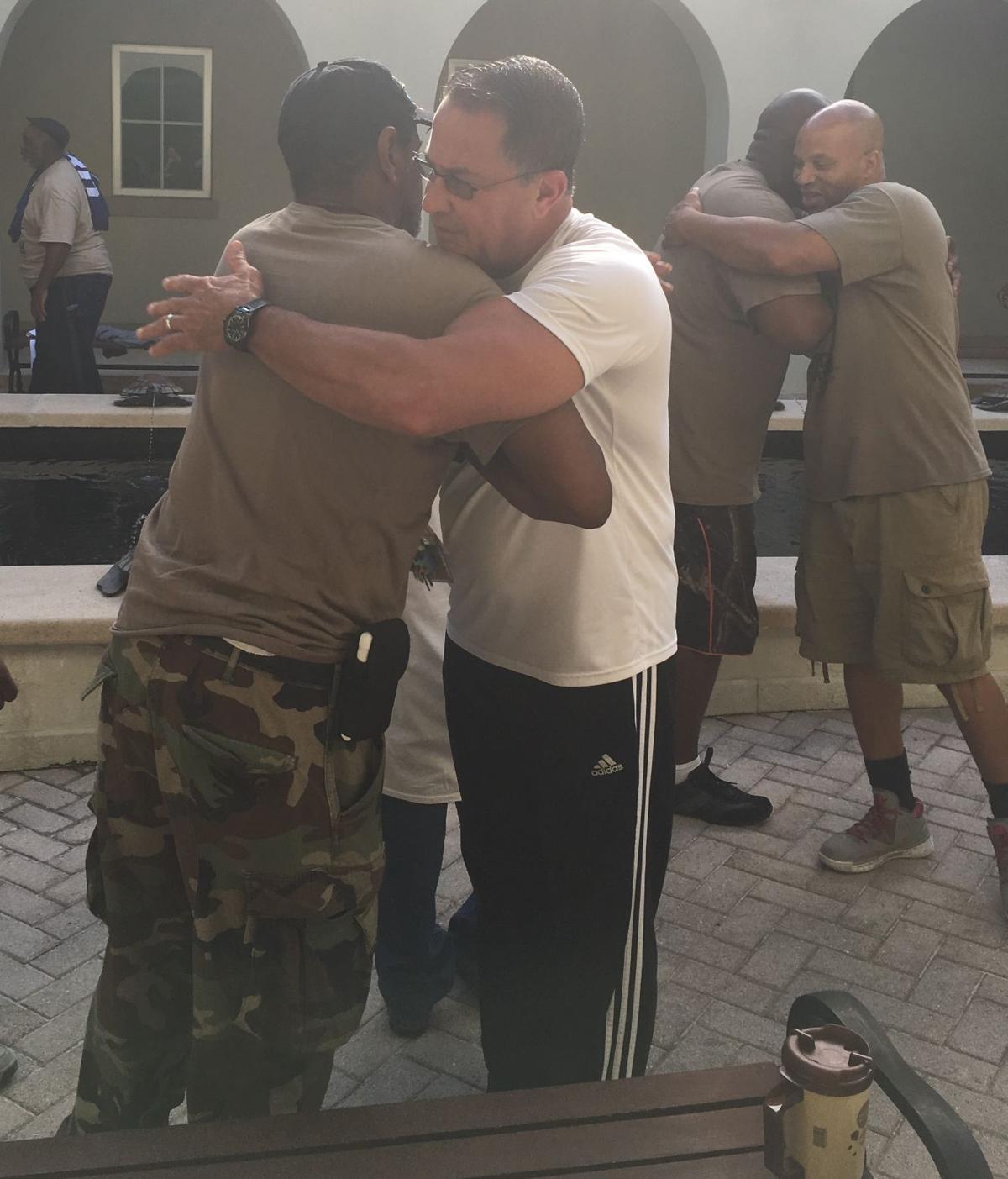 One of the sights you may not expect to see at Village Hall would be several dozen mostly young African American men, some whom will later talk about pasts that included trouble with the law and incarceration, circling the fountain outside the Key Biscayne Police station, doing yoga stretches and embracing one another and the Village’s Chief of Police.

It may not be something you’d expect to see on your average fall morning, but if you’re familiar with Police Chief Charles Press’s outreach work in South Florida, you wouldn’t be surprised.

Press recently hosted men from the Circle of Brotherhood, an organization that mobilizes inner-city men to be the force behind positive change in their own communities. The COB’s motto is “Black men solving their own community problems.”

It’s an idea Press – who made Liberty City, which many of the COB men call home, Key Biscayne’s “sister city” as part of his work with the Miami Children’s Initiative to rebuild the troubled neighborhood – agrees with wholeheartedly.

“Good male role models is exactly what this community needs,” Press said, pointing to the founders of the COB, two former star college athletes who go by Brother Al and Brother Lyle, as perfect examples. “They get in their hearts and they break that cycle of hopelessness.”

It’s something Lyle and Al have been working at for over three years.

In 2013, after one of the mass shootings that plague Liberty City, Miami-Dade Police Detective Ervens Ford had enough. “He was witnessing things that really disturbed his soul,” Lyle said. “Black youth were being killed, and no one paid any attention. He just couldn’t take it anymore.”

Detective Ford approached then Miami-Dade Commissioner Michelle Spence-Jones for help. “She called some of us to come together at that time,” Lyle said. “We only made one promise to ourselves: that we would be brothers.”

The COB started meeting every Saturday at a Liberty City basketball court – “You can still see the strands today of the original Circle of Brotherhood banner,” Lyle notes – and “Walking the Beans,” i.e. taking to the streets of the notoriously violent “Pork ‘n Beans” public housing complex to try to recruit like-minded men.

“We knocked on their doors and let them know the Circle of Brotherhood was present,” Brother Al noted. “They began to look for us.”

“We began to build real relationships with each other,” Lyle added. “A lot has come of that.”

When there was a double homicide in the Pork ‘n Beans, COB members convinced one of the shooters to turn himself in. They began to be regarded as allies by both the police and members of the neighborhood who simply wanted to live a safe, peaceful existence.

Al said that continues to this day. “We’re going right to where the problem is, because many of us have been part of the problem,” he said. “Now, we want to be part of the solution.”

Al said the COB embraced the chance to work with Chief Press, even while acknowledging it might seem an unlikely partnership. “A lot of you probably thought, 88 West McIntyre Street? They’re bringing us to the police station? Have I got the address right?’” he joked. “But there are friends in all walks of life. You’ve got friends all over the place who you just haven’t met.”

“We happen to have a friend in Key Biscayne, and he happens to be the Chief of Police,” Lyle agreed. “He’s also a good citizen of this community, and for us to succeed, we have to have friendship in all walks of life.”

So, the COB members found themselves, indeed, at the Key Biscayne Police station as Lyle and Al took them through a series of Yoga stretches, prayers – “Everything we do is attached to spirituality,” Lyle noted – and call-and-respond exercises.

Press told the COB it’s a spirit that is gravely needed.

“You’re the men in that community. This is your home. It’s up to you – if you can’t take back your home, it’s never going to work,” he said. “Being part of the solution is the right thing to do.

“You are the beginning, middle and end of the survival of Liberty City – of your children having the opportunity to grow up.”

That said, Press was clear that law enforcement bears responsibility as well and promised to keep working to be part of the solution.

And in Press’s experience, “being a white cop” means enforcing the law and putting away bad guys in a professional, respectful manner with the use force only as a last resort. In his 42-year career in law enforcement, Press has never used deadly force when dealing with a suspect.

But he doesn’t shy away from the fact that it happens, and that sometimes the officer is to blame.

“We’ve screwed up not once or twice, but many times. Officers have gone out with bias in their hearts and racism in their minds. Anyone who says that isn’t true is lying to themselves,” he said.

Press acknowledged there are those in his profession who don’t agree with him, but, “There are a lot more like me.”

Press talked about his and the Village’s commitment to Liberty City.

He described growing up poor, the son of a Miami Beach cop in a loving home where both mom and dad strove to make the world a better place. His father started the first Police Athletic League in Miami Beach; his mom founded the first public health clinic on South Beach.

He followed in his dad’s footsteps, joining the MBPD and rising through its ranks before retiring from the agency and continuing his career in Key Biscayne.

“In 42 years of doing this job, 30 of them during really dark times in Miami, something struck me that was wrong with our world,” Press said. “Seeing things from a cop’s perspective and knowing the actions of cops created hate, anger, mistrust – that got right to my heart.

That time came after he joined the KBPD. Press found himself at the helm of a police department in an affluent, unique community; serving a population that was committed to using its wealth, access and education to give back.

He started a charity, first giving holiday meals and toys to poor families. Upon recognizing that being there one day out of the year wasn’t enough to build bridges with underserved communities, he expanded the effort to work with the Miami Children’s Initiative.

Press, now a familiar face in Liberty City, said he is seeing a positive change, and the Circle of Brotherhood is a part of that.

He hopes to build on that from a law enforcement perspective, and asked COB members to join him: “When I walk into Liberty City as a white guy in a blue uniform, I’m not afraid. It took a while to get there; I had to step out of my comfort zone,” he said. “All I’m going to ask you is this: When you look at me, I’m not the Chief of Police, I’m just a man. And I will look at you in the same way.

He said it’s a humanity members of the COB share. “For a kid to have the statistics stacked against him when it comes to having a chance to grow up, to have a family, to make a difference in the world – that doesn’t work for me. And it doesn’t work for you either.”

Press said if the COB continues its efforts – being visible in the neighborhood every day, pushing back against negative influences, etc. – he believes a lasting change will come to Liberty City and other troubled neighborhoods.

“It may not happen in my lifetime, but I always hoped I’d see the seed,” Press said. “And what I’m seeing right here are trees.”

Indeed, as the meeting continued, the COB men joined each other in a moment of reflection, after which they were asked to say a word that describes what they wanted to get out of the day’s events. They used words like trust, hope, solutions, togetherness, peace.

Finally, the youngest participant, a boy not even in his teens, was ready to give his answer after thinking for a good long while:

In a quiet voice, he spoke his word: “Happiness.”

Note of appreciation as Ron Erbel battles on

This community hospital was a 'lifeline' to many

Dak's shoulder 'not a big concern' for Cowboys QB

For Packers cornerback Jaire Alexander, accolades mean ‘everyone else gets to see what I always thought I was’