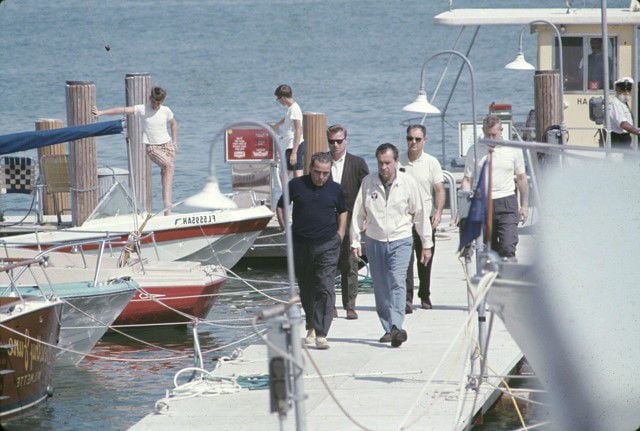 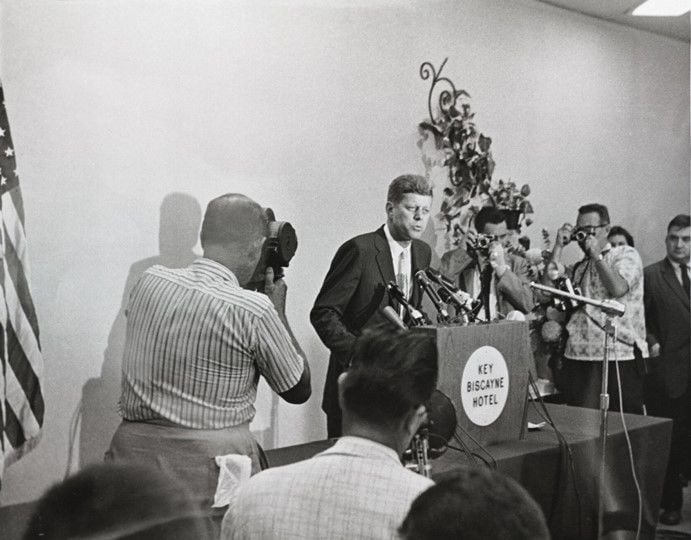 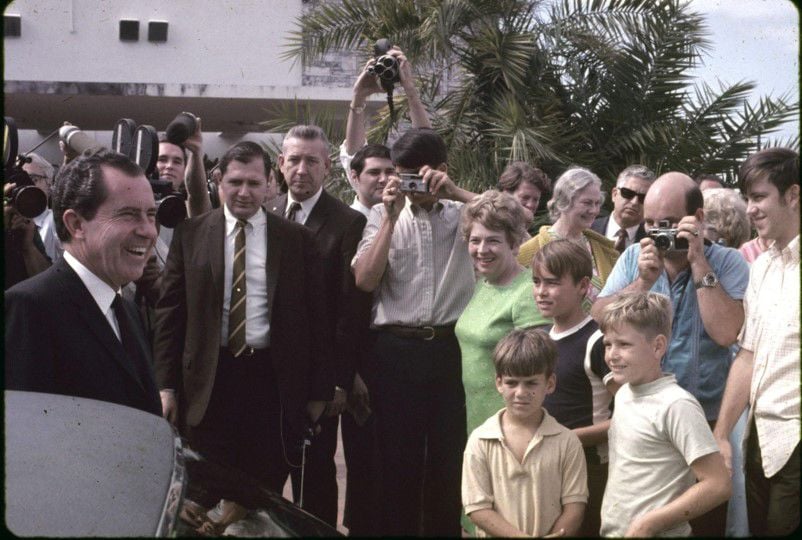 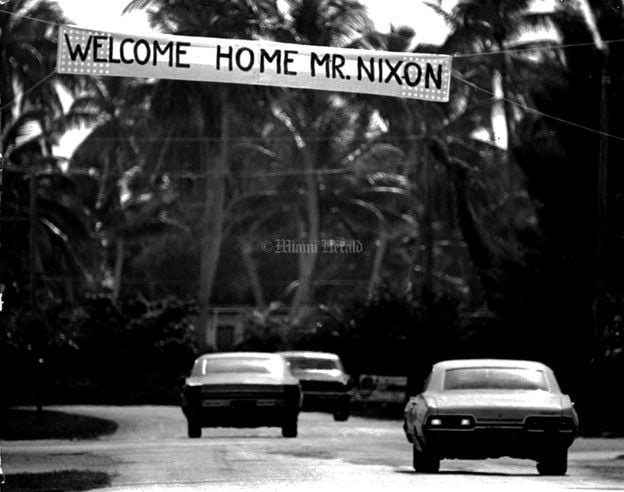 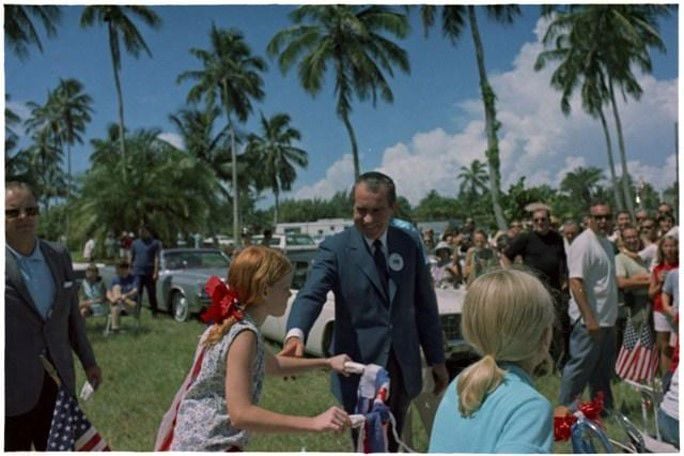 The decades-long friendship between former U.S. President Richard Nixon and banker Bebe Rebozo would influence a presidency and change a tiny island enclave off the coast of Miami – but their beginning was an inauspicious one.

The story of Nixon on the Key, as told by Father Bob Libby in a presentation sponsored by the Key Biscayne Community Foundation and Key Biscayne Historical and Heritage Society this fall, began in Coral Gables, when Rebozo and George Smathers were students together. After Smathers became a U.S. Senator, Rebozo, by then a business leader in Key Biscayne, decided to invite his former classmate and a group of friends to the island to go fishing.

“Among the senators who went fishing on Key Biscayne that day were three future presidents of the United States: Richard Nixon, John F. Kennedy and LBJ,” Libby recounted.

But for Nixon and Rebozo, it wasn’t friendship at first sight, Libby said.

In the years to come, Nixon may not have started chasing women – several of the stories Libby shared highlighted the President’s devotion to wife Pat – but he most certainly learned to play golf (a famous photo shows a smiling Rebozo and Nixon out for a round) and to enjoy a stiff drink: During one of Rebozo’s last conversations with Nixon, when Nixon said his doctor told him to “cut out the martinis,” Rebozo reportedly replied, “I’d get a second opinion.”

The friendship between the two men would last through failed and successful campaigns, a presidency and, of course, the Watergate scandal and Nixon’s downfall. Throughout, the island of Key Biscayne served as a backdrop, and itself was transformed by its most famous inhabitant.

When Nixon first visited Key Biscayne, Libby said, it was a tiny community of some 100 homes.

It was 1950, and Nixon was a newly-elected U.S. Senator from California.

He continued to visit the island throughout his term, staying in a rented home and later at the Key Biscayne Hotel. By 1953, Nixon, just 39, saw his political star rise even further: he became Vice President of the United States, serving with President Dwight D. Eisenhower.

He continued spending time on the island in both bad times – after his defeat to JFK in the 1960 presidential election and losing the California Governor’s race two years later – and good: After he was elected President in 1968, he established his Winter White House on the Key at a Bay Lane Complex. It remained his southern home through the high point of a massive reelection win to the low point of Watergate.

As Libby told it, “He was reelected in 1972 in a landslide with the greatest electoral majority of over 500 electoral votes, and he also had the highest popular vote majority. And yet, in 1974, he resigned the Presidency of the United States.”

Many of the events behind those ups and downs have Key Biscayne links, according to Libby.

Libby, noting Nixon appeared on the cover of Time magazine over 50 times, is still researching how many times “Key Biscayne” was the dateline of a national or international news story.

For starters, there was the 1960 election, when Nixon lost to Kennedy.

Libby showed photos of the two men greeting each other by a villa at the Key Biscayne Hotel, standing outside the hotel surrounded by reporters, and behind a lectern with a Key Biscayne Hotel placard. Nixon had come to the Key after the loss, and was having dinner at the Jamaica Inn when he received a series of phone calls.

“One was from Eisenhower, one was from J. Edgar Hoover, one was from the attorney general, and one was from JFK,” Libby said. “The first three were encouraging Nixon to contest the election, because there had been some hanky-panky in Illinois and in Texas. But Nixon said that would take a year, and whoever was in the White House would be powerless. And because they were at the top of the Cold War, Nixon said, ‘I don’t want to put the country in danger.’”

He decided to concede, and Kennedy traveled to the Key to meet with him.

There are also plenty of events with a local link after Nixon did become President, Libby said.

The Jamaica Inn was the site of Nixon’s first interview with Henry Kissinger, his Secretary of State, and Kissinger was a crucial figure in a couple of events that had ties to the Village.

“One of the amazing things that happened on Key Biscayne that changed world history involved the Yom Kippur War,” Libby said.

Egypt and Syria had attacked destroyed the Israeli Airforce, and Nixon, on the Key at the time, got to work and reequipped the Israelis with American planes. It turned the war around and, as it was revealed some years later, potentially mitigated a nuclear threat, Libby said.

Also, Libby added, “Probably the most exciting, wonderful week of Nixon’s life occurred in January of 1973. He was newly reelected as President of the United States. Henry Kissinger had just gone to Paris and signed what he thought was a peace treaty to end the Vietnam War.”

While peace would prove to be elusive, at the time the treaty was heralded, and Nixon flew to the Key. Libby said there was a big celebration at the Key Biscayne Presbyterian Church, and Nixon rang a bell – which is still on church grounds – to mark the end of the war.

Toward the end of his presidency, Libby said, Nixon called his old friend Rebozo and beckoned him to Washington D.C. Rebozo traveled from Key Biscayne to the White House, and when he got there, Nixon walked out and joined him in the limousine that had met him at the airport.

“Nixon directed the driver to go to the Potomac,” Libby said. “There, he directed the captain to take them way out of range. They sat over the engine, and talked into each other’s ear. Nixon told him where things stood, and Bebe told him, ‘You’ve got a choice. You can resign and leave in honor, or you can be impeached. It’s up to you.’ They went back to the White House, Bebe spent the night and went back to Key Biscayne the next day.

The stories that made headlines weren’t the only ones Libby shared.

He also told of the more personal moments that occur when a president makes a small island Village his part-time home: how Nixon heard Reverend Billy Graham was at the Key Biscayne Hotel pool, so he donned his swimsuit and went down to meet him; how a bellhop at the hotel was impressed that Nixon always remembered his name; how the Key Biscayne Yacht Club would open early to serve Nixon and Rebozo breakfast; how Nixon asked the Chowder Chompers to play Oh Tannenbaum when the German Chancellor visited him on the Key in 1971.

There were also stories about Nixon’s devotion to Pat.

Captain Jim O’Neil remembers Nixon asking him to take Pat and the girls around the island on his boat; many people can still envision them traveling down the canals and waving to people on shore. An island barber recalled the parking lot he shared with a florist being roped off by the Secret Service when Nixon wanted to buy yellow roses for his wife.

Libby added, “Nixon attended the [Key Biscayne] Community Church regularly, and when Pat Nixon died, he planted a yellow rose bush in the garden there at the church.”

Church is where many residents encountered the former president.

The Presbyterian Church was the island’s biggest at the time, Libby said, and Nixon attended with his cabinet, including Kissinger. The late Dick Cromartie, who helped found the Village of Key Biscayne and for whom the local American Legion chapter is named, was no fan of the President’s politics, but was impressed when Nixon approached him at the church after hearing of his heroics in World War II. “Nixon thanked him,” Libby said.

Nixon also went to the Community Church often, and one day the pastor saw him walking the beach with his pants rolled up and coat over his head.

The pastor introduced himself, Libby said, and Nixon told him, “I appreciate the fact that you keep the door of the church open. When I come back from campaigning I’m usually all strung out, and I go and sit in the church for an hour or two to calm down.”

Walking the beach was something Nixon loved, and that drew him so strongly to the Key.

But the Secret Service didn’t think the Atlantic Ocean shoreline was a safe place for Nixon’s strolls, so, when he set up his presidential compound at the end of Bay Lane, “They bought a beach,” Libby said. “They bought the Nixon Beach, and he and his family walked there.”

“The Secret Service told them, ‘The minute the water splashes, the lights and the sirens are going to come on, so you’re going to have to behave,” Libby said.

The Secret Service were behind several humorous stories told by Libby.

He said the late Jean Ferris used to talk about how she always knew when Nixon was coming by the arrival of a tribe of Secret Service agents, clad in wild tropical shirts. She remembered, “When I saw the shirts and the grass on Crandon being trimmed, I called my hippie friends in Coconut Grove and they got out here with their protest signs.”

Mike Ruben, whose father owned and managed Burns Men’s shop, recalls the President coming in the store surrounded by a bunch of men in tropical shirts. One time, Ruben’s father was making a shirt for the President, and when he reached in his pocket for a measuring tape he was grabbed by two Secret Service bodyguards.

The Secret Service may have seemed omnipresent on the Key while Nixon visited as President, but after his resignation, everything changed.

Nixon continued to spend plenty of time in the Island Paradise, Libby said, but he declined to keep his Secret Service protection, and spent his time on the island in relative quiet.

Those years ultimately became the final chapter of the story of Nixon on the Key.

“After the resignation, Nixon lived another 20 years,” and, having stepped away from work, he did what so many do, albeit under much different circumstances.

As Libby put it, “He became a snowbird.”

Press feels much achieved during his interim role, but home is where the police are